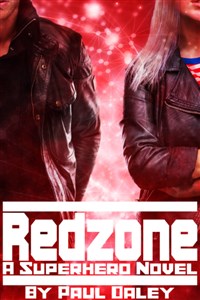 Clint's carphone chirped. From the time of day it was, he knew whomever it was on the other side of that connection only had bad news for him. No one from work would call since he was still transitioning out of his old life and into his new job. That left family or other random forces of evil set on continuing the ruination of his life. In no hurry to welcome those random forces back in, his hand reached for the phone with the glacial pace one uses in hopes that the caller will hang up and go away.

"Mr. Davis? This is Mrs. Buttermore," said the voice on the phone.

"That's right. We need to have you come in."

The forces of evil return.

She went on to say more, but Clint recognized the end of his daughter's enrollment at another school when he heard it. Over the past year, principals had used variations on this theme, but they all amounted to the same thing. Your kid's too fucked up for us to handle, so you're going to have to find another school.

Every time the person on the other side of the conversation knew what had happened to Amanda. With each new school, Clint explained about her, describing who she used to be, and pleading for their help in getting her back. At first, he told the teachers and administrators her story so they knew what they were dealing with. He hoped they'd draw inspiration from that information to find the strength to keep working with her, trying to reach her no matter what may happen in class.

Now, when he told them, he hoped knowing her story would gnaw away a piece of their souls when they inevitably sent her away.

"She scares the other children," stated Mrs. Buttermore after opening the meeting.
Up until that point, Clint didn't like or dislike Mrs. Buttermore. There hadn't been time to feel strongly about a person with such a bland presentation. Although he usually found her plain-spoken, bullshit-free approach refreshing, Clint now found it harsh and uncaring. Now, he was leaning toward dislike.

The group of administrators, teachers, and Clint sat in one of the school's conference rooms, with Mrs. Buttermore positioned at the head of the table. The walls were tan-painted cinder blocks and the carpet was a rugged, dark blue, indoor/outdoor style, like the rest of the school.

Clint noticed that the table itself was actually made of wood, making it a rarity in his ever-widening experience with public school conference rooms. Lingering vestiges of common courtesy insisted Clint return eye contact to Mrs. Buttermore after getting distracted by the one-of-a-kind table.

Repeating well-worn lines like an actor on closing night, Clint said, "She can't help that. She's on medication and sees a therapist. We're doing our best here."

"Here" sounded more like "hee-uh". He wished his accent matched the locals, especially in his old job, but the east-coast quasi-New York accent he tried to bury always re-surfaced in stressful moments. Surprise overcame him for a second when he realized that he still felt stress in the middle of this predictable exchange. It gave him hope for his own resolve.

"It brings me no pleasure to have to tell you this, Mr. Davis," said Mrs. Buttermore. "After all, I went into this in good faith. I think it's fair to say we all did."
Heads shook obligatorily around the table.

"'Mr. Davis'? You called me Clint a month ago." He gestured around the room. "All of you did while you were telling me that you would give her your best," said Clint.

"A month ago we all felt like we could still make some progress with Amanda," said Mrs. Buttermore.

Before she could respond, the woman sitting next to Mrs. Buttermore leaned over and spoke to her behind a cupped hand. Although she had been late to the meeting and hadn't introduced herself, Clint knew the pant-suit-wearing, tight-hair-bun-sporting woman as the school district's lawyer. She'd overseen several other dismissal meetings over the past few months. At each meeting, she'd worn a different, but somehow similar-looking, pant-suit. When reviewing the meeting later, an alcohol-infused Clint wouldn't be able to recall many pant-suit-wearing women he'd ever liked and laughed when he realized the district lawyer kept that streak going. Kept it going strong.

"Well, what will she," Clint nodded to Pant Suit, "let you say?" asked Clint rhetorically. He knew what was coming anyway.

Mrs. Buttermore's demeanor shifted from neutral to stern as Clint's disruption caught her off guard. Principals don't ever get used to interruptions, whether the source is a student or their pissed off parents. As a result, when she spoke again, her tone was more clipped, like she was reprimanding a sass-mouthed child.

"What I will say is that at this point in her development, Amanda's trouble controlling her physical and oral outbursts represents an untenable risk to the educational integrity of this school and of the other students. It is with regret that we have to dismiss Amanda from her program here," said Mrs. Buttermore, her eyes never deviating from Clint's until she reached the word "dismiss".

An urge to defend his daughter rose within him, but the last year had taught him better than to offer up a defense. His pleas hadn't worked at the last three schools and Buttermore's icy rendition of the, "get the fuck out of here," speech had been the coldest yet. Their minds were made up. Any effort spent arguing would waste both of their time.

"Mr. Davis," said the lawyer. "Given that this is Amanda's fourth placement in our district, I'm afraid to say that we've run out of options for her. You should consider moving to another district or you may need to consider placing her in a state sch-."

"No reason to be vulgar, Mr. Davis. We just wanted..." the lawyer started.

"You just wanted to say all the stuff the law says you have to say before you let me leave. Let's save time." Clint stood up. One of the teachers whose name he'd forgotten gasped. He looked in her direction with a cocked eyebrow and confused frown. "Just get my kid and show me where to sign to get her out of here," said Clint.

"I saw Mommy. I promise, Daddy. I saw her," said Amanda, seated in her usual place in the back of Clint's Mustang.

"I know you think you did, Sweetie. You know that's not possible, right?" Clint said words he's had to say before to his daughter as he wove through the suburban traffic to get them back home. For such a small town, Katy presented a thousand obstacles between the school and the Davis' home. The Mustang, which Amanda called "Growler" thanks to its rumbling exhaust noise, begged him to push the speed limit. Hating to drive fast with Amanda in the car, he couldn't work on fixing things until they got home, so going faster felt excusable.

"I know, Daddy," said Amanda, shoulders slumping as she spoke.

Seeing her like this killed him. She'd been excited about getting to school today because she wanted to show off a new Pokemon shirt she'd picked out. Amanda realized the kids in her class had a hard time accepting her and she'd hoped the shirt would help her fit in. After the day's events though, her long, straight blond hair couldn't hide the damp spots on the front of her new shirt from all the crying she'd done.

"But she snuck up on me this time," said Amanda, like she was afraid to admit it.

"It's alright, Sweetie. We have to talk it out. Did she say anything?" Clint asked.

"Does she ever talk to you?" Clint asked. Like the rest of this discussion, Clint had asked this before, but he sought to try and find any variation between episodes.

"One time she did. But not today. She was just behind me when I put down my backpack. When I looked up, she surprised me," said Amanda, voice diminishing as she explained.
"That's what made you scream?" Amanda's Head-Mommy had made such appearances before and usually made her scream.

"I didn't scream. I ran. I tried to run and I hit the diowama table," said Amanda. Even with years of speech therapy before the accident, 9-year-old Amanda still had trouble with some words, pronouncing "diorama" with a "w" in place of the "r".

Clint saw her face in the rearview mirror as she stared into the car's ceiling above his head. His training told him she believed in the story she was telling him. It may not be what happened in the real world, but she believed it was. "It hurt my leg and a bunch of diowamas fell on the floor. I might have screamed a little then."

"Did you step on the dioramas?"

"I didn't mean to," pleaded Amanda. "Mommy just looked so angry. I didn't want to see her anymore. I ran."

"Oh, Okay. Principal Buttermore said something about the stuff that you said. You didn't say anything today?"

"I said 'Mommy, go away! You can't kill me, Mommy!'" She said it like she would have in class, full of intensity and fear.

"Your mom didn't try to kill you with that car accident, Amanda. She did all she could to protect you." Even though they'd talked about it countless times in the last year, the accident still left Clint feeling angry and hollowed out. Over the steering wheel, he noticed his white knuckles and a speedometer needle steadily increasing. He loosened up and took his foot off the accelerator.

"I know, Daddy," said Amanda. "But, why'd she have to sneak up on me?" The meekness in her voice had been replaced by an out-of-place earnestness, making her sound like she had been asking about a friend at a sleepover.

"She didn't. You know what I'm going to say," said Clint.

"It's all in your head, sweetie," Clint said, putting as much reassurance as he could muster into it. "Mommy would never do that, anyway."

"I know, Daddy," said Amanda. "But I can't tell the difference."

"I know, Sweetie," said Clint as he turned the car into their driveway. "But let's not worry about that right now, OK? Daddy's going to figure that out. Let's talk about dinner."

Because I have no idea what to do with you tomorrow.

Bio: I like to write. I'm trying to get better. Promise.