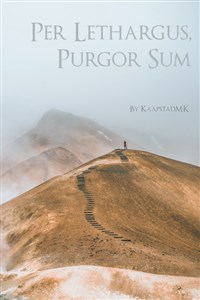 Jack ran for his life. The faint burble in the distance grew louder and louder. The beasts, black dogs of some sort that he could not describe in full view of their terror, were hunting him.

They could probably smell fear, for all Jack knew. The fear exuding from him must have been absolutely delicious, because he was terrified. It was the kind of terror that made his body ache, longing desperately for some sort of reprieve even if that reprieve meant death.

Then again... Jack had just died, hadn’t he?

He was hit by lightning. Right in front of the hospital. One moment he was there, and the next he was in darkness. Either he had been transported magically to this new world via some sort of electro-magnetic transmigration, or he had been killed and reincarnated in the middle of a forest. He wasn’t sure which one was worse, but he certainly hoped he wouldn’t perish once again.

He made another torch by rubbing some sticks together, and hoped that even though the fire would draw much more attention to himself, it would also keep away the scary monsters. The monsters would instantly kill them if they got the chance, and as he previously established, he really just didn’t want any monsters to kill him.

The future refused to change.

Four dark beasts pounced instantly. Their fear of fire was overestimated, to say the least. In fact, it turned out that their skin was flame retardant and doused the torch the moment their bodies touched it.

Jack was eaten and killed almost instantly. His world went red, then black, then nothing.

Then Jack woke up again.

Wait a minute, what was going on?

When Jack finally came to, when he finally looked all around him, he saw nothing but horror: He was in a world composed entirely of soft, bouncy fabrics and pastel colors.

He himself was made of felt rather than skin.

Next to him, a giant life-sized doll elephant walked around. It had buttons for eyes and began watching Jack intently.

“Who are you?” the elephant doll asked with a cartoonishly buoyant voice.

“I’m Jack,” he said. “I was just reincarnated here. I used to live on Earth, and then I got hit by lightning and died. Then I used to live in some other world except I was killed there in like five minutes.”

“Ah, I see!” the elephant exclaimed. “You must have received a death penalty.”

“A death penalty,” it repeated. “You were on Earth, which is a Class C planet, right? I think it’s Class C, at least. Well, you died in an embarrassing way without reaching a high status, so your next reincarnation was to a low-rank fantasy world. I can’t say where it was or what the rank might have been but I bet it was a fantasy world where you would have become a magic-wielding knight or something like that. We get a lot of those here.”

“Why, Plush Land, of course!” The elephant tooted out a triumphant trumpet from its trunk. “We’re the lowest rank world in all of Multiverse CD-X11. The place where beginners go when they can’t quite cut it in the other worlds. Normal death is impossible, and there’s lots of minigames to train with.”

“Don’t take it personally. A lot of heroes started way down here in Plush Land. You ever hear about Micah, the Blessed Chronomancer? Or Jimmy Carter, the Peanut King? Both of them started here.”

“Yep. Let’s get you to Fluffy City and get you registered with the Fun Guild. You’re gonna have a great time!”

Jack and the elephant went. Maybe today wouldn’t be such a bad day after all.

In case you hadn't already figured it out, this chapter is an April Fool's chapter, courtesy of @Thedude3445.

When you get the chance, head on over and check out their stuff. They've put out some pretty entertaining work and are a regular contributor to the forum and RRL community!

Were you fooled?
Previous Chapter Fiction Index
About the author

Bio: An American-African (not African-American), who keeps little people healthy by day and reads for catharsis by night