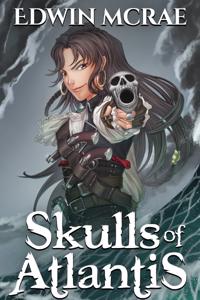 This is now a Five Chapter Sample. The full novel is available on Kindle Unlimited.

“Peer into the gizzards of your prize and see if you have the guts to take it.”

Now Atlantis has risen from the depths and Deadeye aims to plunder the city and capture its fabled Star of Atlantis, an artifact that will enable her ship to travel vast distances in the blink of an eye.

With Inkman, Jonesy, Sandwich, Mad Maggie and a host of motley corsairs from a score of different nations, Deadeye will shoot and swash her way through anyone and any thing that crosses her bow. But our plucky pirate captain is in for the shock of her buccaneering life.

There’s a reason Atlantis has returned from the bottom of the Atlantic Ocean. An ancient god is awakening, straining against the arcane chains that were forged to bind Him. Should He break free, the whole world will feel the tidal waves of His wrath.

Captain Deadeye and her crew will need to look lively and level up if they are to defeat this antediluvian evil. Especially if they want to get mind-bogglingly rich in the process.

Skulls of Atlantis is a Gamelit pirate adventure where characters level up and improve their abilities. Deadeye can also upgrade her ship, The Albatross. The game mechanics are shown as notifications called “the otherwords”. They are designed to work with the story, not interrupt your reading experience.

This is a preliminary review, as the story is not very long yet, but it already looks very good.

Style: The story is told in first-person style from Captain Deadeye's perspective. We see her thoughts and feelings and her perception of the events. Those are, like her dialogue, told not in standard English but in "pirate talk", which makes reading the story feel very immersive (e.g. "I shoots me musket", but thankfully no "yarrr"s).

Story: The story page already tells what the story is about and so far we were introduced to the important members of the crew, watched a boarding and the first fight on land, then further plans were made. There is a very nice balance of action and downtime and it's easy to get into the plot. The LitRPG elements are inserted when and only as much as they are relevant to the current action (e.g. when they see the first glimpse of land, only the high perception score is shown)

Grammar: Some typos but the rest is good (not counting the ungrammatical pirate talk).

Characters: As it is a first-person story we know Captain Deadeye the best, she's not a simple bloodthirsty pirate but has a complex character, often showing glimpses of the un-piraty youth she left behind. In her crew, each one of them is different from the rest of the motley crew, with some strange guys and gals among them. All in all, a nice group to go plundering with.

There are not many pirate stories on RRL so this is a refreshing find. Both from the writing quality and from the story itself I can wholeheartedly recommend reading it.

This do be a whale of a tale so far.

I love sims, stories, and pirates, and this brings them all together to have a quick snog down in the bunks. Reminds me so much of Uncharted Waters, one of my favorite Koei games from the days of yore. Can't wait to see where this one goes.

Very well written. The high seas vernacular is immersive without being over the top. Give it a go!

A fun piratical romp so far. Really decent take on stats and good worldbuilding. So far it’s a fun pirate adventure written so that it feels authentic. It’s different from (and better than) any sea-based litrpg I’ve read in the past and I recommend it. It’s worth a read and still going strong.

Reviewed at: Chapter Thirty-one - Queen of the Philipines

its a good read, nice grammar, nice story, and it keeps me interested

Reviewed at: Chapter Thirty-one - Queen of the Philipines

And now I have to meet the character limit

Finally something new on the LitRPG market! Follow Deaseye and her crew through the troubled waters. Great adventure story with an interesting skill system.

Looking forward to where the wind will bring us!