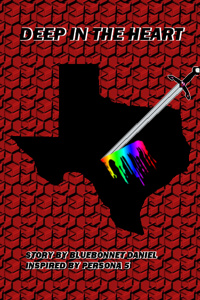 Note: A re-write is currently being posted to both this site and AO3. I recommend you read that version first instead of this one, so check my profile for the new version.

A snarky, anti-social band student named Ashley finds a strange journal in her closet which allows her to access a mysterious parallel world. This kicks off a bizarre and turbulent journey, in which she finds herself leading the charge against a malevolent entity.

The story is inspired by Persona 5, but features a fully original cast of characters and setting.

Note that this work is overtly religious.

Note: This story should only be posted to Archive of our Own, Royal Road, and Wattpad. If you find it anywhere else, please let me know.

Reviewed at: Chapter 26: The Judge (September 3)

One is the psychologically-tangent action of Persona 5. The other is a high-school drama navigating the challenges of queer romance in a religiously-motivated hostile environment. The story synopsis sets you up for the former, but for the first ten chapters, what you actually get is the latter, with the action plot only kicking in around Chapter 11.

It's not bad, but it does create a significant disconnect between expectation and payoff. There's a fair amount happening from the drama angle, so it would have worked better if the two halves of the story had worked more in conjunction with each other rather than being so separated, with characters' development and drama occurring as they explored the realm of the Metaverse rather than for a long time beforehand. I would have liked to see far more integration between the two plots and the characters' movements between worlds. And because Persona is all about characters' underlying psychologies, it feels like a real missed opportunity.

On a related note, I think there's a lot of content in the first ten chapters that would have been better cut from the story completely. We see many mundane interactions at school with characters discussing movies, music and games in detail, with plenty of jargon, music terminology and pop culture references thrown around. While I did get most of the references, it slowed the plot, and I can only imagine what it would have been like reading these sections as someone who had no idea what the characters were talking about. Rather than sifting through frequent nods to other existing franchises, I wanted to find out more about the unique aspects of the world these characters inhabited.

On the positive side, the grammar is strong, the plot points are interesting and meaningful, and the story accurately captures the feel of the game, especially after Chapter 11. At this point we start seeing more of the Metaverse, more of the world-building, and begin to learn more about the mysterious Lucy and other characters inhabiting this strange layer of reality.

The diversity in this story is a big plus, with a queer cast portrayed with valuable, meaningful relationships rather than thrown in to check a box or for titillation. It also handles its female characters well, which is a rarer trait than it should be in fiction. All the characters, in fact, feel quite distinct and have plenty of personality, even the minor ones. You won't be forgetting them any time soon. Anja in particular is a personality you don't see too often in this kind of fiction - an ambitious, well-read teenager who made me grin several times for being the living embodiment of millennial internet culture.

That said, I did have a couple of issues with the characterisation in general - the main characters had a definite tendency to jump to conclusions without supporting observation or evidence; very much an 'act first, ask questions later' kind of approach. Which wouldn't necessarily be a problem if the story didn't automatically assume they were in the right. And sometimes it was just jarring, like Anja's intent investigation of an app icon she saw for a second on her friend's phone - I felt like this wouldn't have been unusual enough to warrant that reaction, and it needed more of a suspicious circumstance surrounding it to be justified.

The villians could also have been handled better, with a tendency to be somewhat one-dimensional. The treatment of the arc villain was especially frustrating, some of which appeared to stem from misunderstandings surrounding their profession. (Although I did appreciate the mature handling of the arc resolution.) In the Persona 5 game, there was typically more of an investigatory phase before or even during the heist, and I think that would be very helpful here. Not only would it make the protagonists more sympathetic and provide more evidence of what the villains did wrong and why, it would provide some interesting plot points and exploration opportunities as well.

I'm going to continue reading this one. There's some good stuff in here, and it has a lot of potential. But it really does feel like two separate stories at the moment, and it would benefit from much closer integration of the two halves.