I wasn’t entirely certain how to go about dealing with what looked like hundreds of cores at once. Every single core I’d dealt with so far had been a red core, representing a singular dungeon. At the very end of the closest sprawl of colored cores was a conspicuously empty socket, where the original red core must have come from. ANATHEMA grated at me, telling me that despite their colors, all the other cores were just as much an issue. It wasn’t just red cores that were the problem.

That said, I could be in two places at once, as it were. The middle, dead core wasn’t going to be any help, but everything seemed to link up to the two secondary cores. Well, I didn’t know the middle core was useless, but considering the damage and the conspicuous lack of a glow, it seemed a safe bet so I focused on the active cores.

While I could move my own cores around and it didn’t seem to matter at all, the arrangement of the hundreds of cores in the Great Dungeon spoke of something with intent. Perhaps there were even two separate dungeons at play, some weird chimaera brought about by the destruction of the central, coordinating nexus. Either way, Shayma was integral to taking control.

“You take one of those, and I’ll take the other?” I suggested, moving the seed-ship toward the nearest oversized core. With Ansae watching over us I wasn’t concerned about what other defenses might pop up to stop us, though I was certain some would. Even if they were just autonomic responses, autonomic responses with the firepower a Great Dungeon had would be dangerous. “Ansae, I trust you to do whatever needs doing. Even if it means exploding all these cores.”

“Oh, it would be my pleasure,” Ansae said grimly. “If it weren’t for the fact that doing so might destroy the planet, I would have erased them already.”

“Yeah let’s hope we don’t have to gamble on that.”

“Definitely not,” Shayma agreed, winging her way toward the other house-sized core, squinting down at its white glow. “On three?”

“Oh three,” I agreed, doublechecking that I had as many mana dynamos as possible running, because I knew this was going to take everything I had. Even if it didn’t, better to overprepare than the reverse.

Shayma counted us down, and I braced myself before bumping the seed-ship into the crystal. Every other time that I’d encountered another dungeon, the result had been basically a brute force shoving match of mana. Fundamentally it was a contest of strength and speed, and while the Great Dungeon was bigger and much, much older, I definitely had an edge. If all I had to do was pour mana into something through myself and Shayma, it wasn’t too bad.

A whole new sensorium blossomed up, rather like when I took over core’s territory, but it wasn’t anything I could control. Instead it was just a sense of everything that was arrayed against me. A whole immense set of climates and rocks and trees and monsters, all radiating absolute fury in my direction. Or, more, ANATHEMA from the other side. Fury wasn’t the right word; it was like they were absolutely certain that I was an affront to reality simply by existing.

That fury poured down channels, accumulating power as it grew, an enormous avalanche rolling down toward me. It was a frankly horrific sight, or at least sense, of something snarling and inexorable. I had bane mana on my side, but I didn’t have all the subjugated minds of the Great Dungeon backing me. What I did have was Shayma.

“Gods above!” Her voice echoed in the strange liminal space, more concept than substance. She was bright and sharp and loomed large against the entire anathematized landscape in front of us. Even her armor came with her, bound to her soul as it was, a comforting, protective weight. Neither she nor [Unbreakable Promise] manifested as physical things; if anything, she felt more like a Skill within the context of the combat space. Not that I was going to use her as such.

“No, this is the first time this has happened.” Conversation moved at the speed of thought, taking barely any time at all, as I marshalled my mana and will toward figuring out how to deal with the incoming tide. I wasn’t totally adrift, possibly thanks to my purchased traits. It wasn’t a vast, featureless sea crashing down on us, it was thousands, millions of channels and rivers and branches stirring and converging toward us. There were holes, weak points, and I had an arsenal of fast-regenerating mana.

I lashed out toward the most urgent-seeming intersections, forming spears out of my mana pool and hurling them through the ether. Except it wasn’t really the ether, it was the Great Dungeon’s own dispersed biology, all the trillions of tons of it backing the core array. Instead of withering it as it went along, my mana seemed to pass through with little trace, only leaving a faintly scorched trail. It was irritating that I couldn’t target the core directly, since I was physically attached to it out in the real world, the connection sizzling as raw mana discorporated matter.

To me, the framework of the area was just all these whirling channels of mana on one side and me on the other, two giant environments with some kind of no-man’s-land in between. I had no idea what that represented in reality, if anything, but I got the vague sense that somewhere in the back there was a vulnerable point, a core to the core, some kind of executive function or magical nexus. Unfortunately, if it existed, it was behind everything else and I was having issues just sabotaging its attempts to advance.

Shayma joined me, drawing from the same mana pool but somehow doing something entirely different. My new Skills might have been responsible for the greater insight into dungeon combat, but they certainly didn’t give me more tools than just hurling raw mana with some precision. It was probably a personal lack, as I simply hadn’t had enough experience to evolve anything more complicated, but Shayma had no problems executing things with rather more finesse.

She whipped the [Chimaeric Neutronium] forward, some aspect of its weighty stellar magic slamming through the incoming magic and dispersing whole swaths of it, cutting into the opposing dungeon core’s metaphorical forces. Somehow she moved forward, despite the fact that I felt I was fairly well stuck in place, dancing into the framework of the foreign dungeon and wreaking destruction as she went.

Effective attacks were all well and good, but it would only go so far if we could do nothing but combat the nebulous morass of billions of miles of Great Dungeon. We needed to take the cores; the rest of it was just a distraction. Even if we were directly touching them, they didn’t seem to be anywhere in the sensorium, or at least, I couldn’t see them past the rest of it.

“Can you tell what we need to target?” Since Shayma seemed to work by different rules, maybe she could actually see where the metaphorical ⁠— or possibly metaphysical ⁠— core locations were.

“It’s behind that wavefront,” she replied, which was endlessly frustrating. The reason we’d gone all the way down to the cores was to shortcut having to deal with the rest of the dungeon. I could have done this just as well from up above. “I’m glad we don’t have to deal with everything else,” she added, as if she could hear my thoughts.

“Literally, everything past that mess!” Shayma shot back, and it was only then that I realized that beyond the assault thundering down on us was not an end to the conceptual space, but rather the actual rest of the Great Dungeon. Everything I could feel, everything that seemed to extend almost without limit, was just the combined might of the governing cores themselves, acting as extensions of the area they governed. The reality of the Great Dungeon was just so big it had seemed like a blank wall.

Suddenly, the hostile force we did have to deal with looked far more manageable. I stopped being distracted and kept hurling out bolts and spears of Bane mana, of which I had a nearly endless supply. It was really, really nice having insane mana regeneration, so even after setting up the massive fields to screen the rift above I was hard-pressed to spend it faster than I gained it.

Actually, the two of us worked together pretty darn well. I could snipe the confluences and shortcuts that channeled the intense rush of mana and break up its concentration, forcing it to spread out, while Shayma was able to forge ahead and cut off the sources of the attacks, annihilating the bits that I exposed for her. While seconds stretched out in the real world, we started to make inroads on the power that was still aiming for me.

At least, we seemed to be doing well until a thread of that power got past our combined efforts and slammed down into me, the feedback rattling the seed-ship. It stung a bit, but the problem wasn’t the frankly irrelevant amount of pain. It was that the attack surged straight through me without any way for me to stop it, slamming into one of my [Sacrificial Cores].

It exploded with enough force to throw a mushroom cloud into the sky above the Caldera.

Enjoy the story?  Blue Core is finished on Patreon or SubscribeStar! 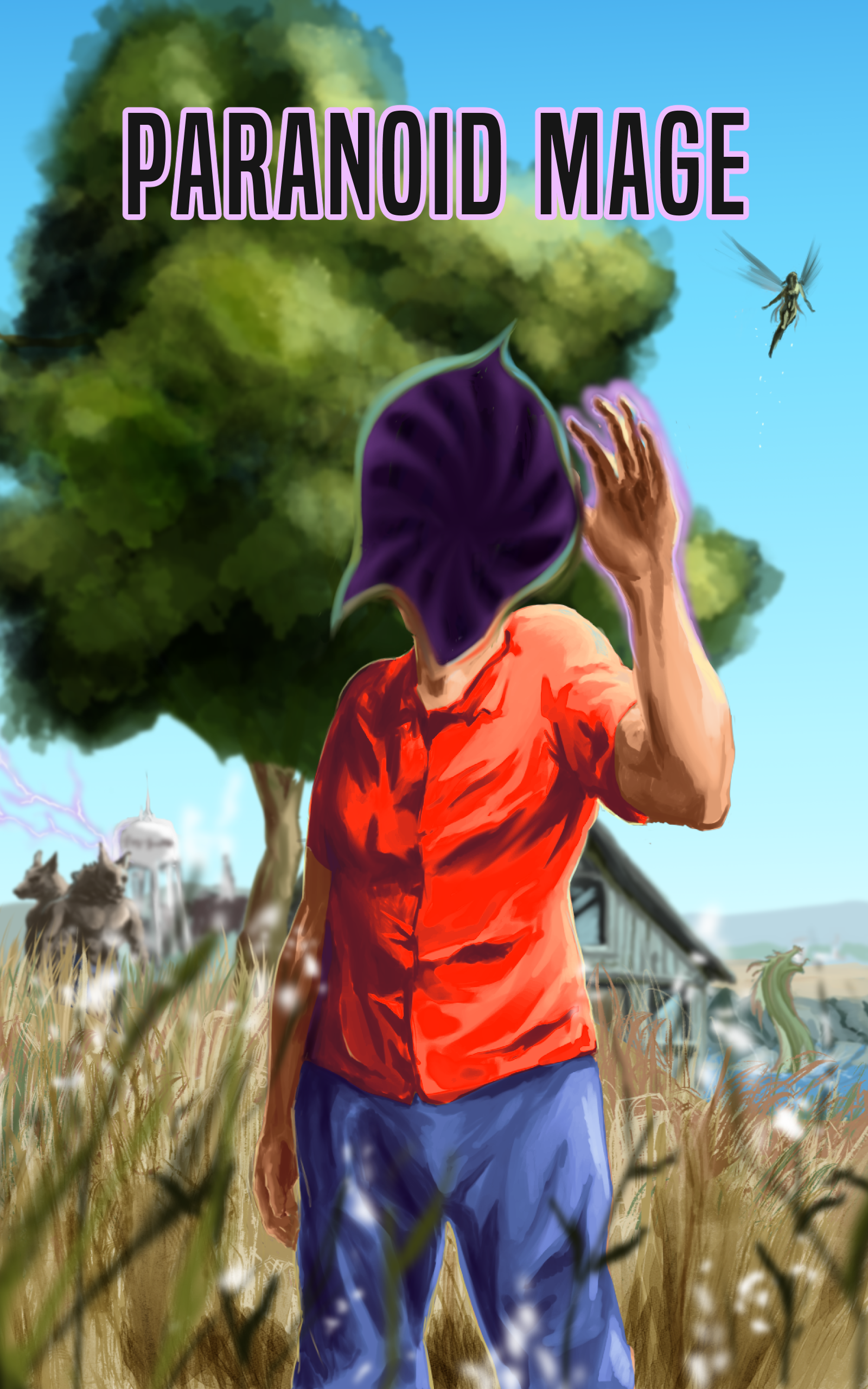 Now including a preview of my next story, Paranoid Mage! This story will arrive on Royal Road the first week of January.

Blue Core Book One and Book Two are available on Amazon!