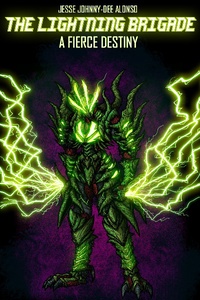 At the cost of all you love, ignite your soul! Fight, Lightning Brigade!

Awakening to an ancient legacy that they want no part of, Jordan, Anna and Rick discover they are the heirs to an overwhelming alien power. A power that Anna's mother, Rebecca, took up nearly ten years prior. Together they must learn how to master this dangerous new ability to combat monsters that would see humanity dead. Though they are barely teenagers, they will fight to change the world. However, they do not stand unopposed.

Rebecca seeks to shield them, the Supreme United Nations wants to weaponize them, and sinister alien intellects seek to control them. The Lightning Brigade want none of it. They fight for humanity, against the unseen horrors lurking beneath the surface and the monsters that await beyond the stars. Manipulators and deceivers on all sides, Anna, Jordan and Rick find they only have each other to trust. This is the start of their story, one fraught with peril and great danger. Join them, won’t you?


Updates typically twice a week, Tuesdays and Saturdays, but can be subject to change. Notifications ahead of time will always be made.

Reviewed at: Chapter 23 INTERMISSION: Conflict In The Stars!

What a great story, especially with this premise, which is one of a kind i simply havent seen before in webfiction, one that i didnt know i actually wanted to read.

Earth is being invaded by a alien species, one bent on claiming Earth as theirs, and humanity is the only thing preventing them from outright doing such. To combat them, the Supreme United Nations were formed, to fight off their constant invasions, wherever they may happen, yet its not enough, true victory seems far off, after 30 years of constant fighting new invasions. In the middle of that, there are those who should haved died, yet awakened to a strange power, a alien and powerful one,  and they decide to use that power, to fight the invaders, some of those chosen being just teenagers. However there is more than simply the invaders, among their enemies are monsters, alien species and even those who are close to them, who would want to control them and their powers. Against all of this, those of the Lightning Brigade fight, for eachother, for humanity.

There are quite many characters in this story, each with their own kind of story. This story mainly follows Jordan, Anna and Rick, who are barely teenagers in age. And that does show in how they behave as characters. They just are so distinct from eachother as characters.

I greatly like this premise, it reminds me so much of Power Rangers, which was quite the popular setting back in the day. I never really questioned the fact that there were just no webfictions with such a premise, not at all. And now i see this one, with how wonderfully it has been done here, making a distinct story of its own, that seems just original. The worldbuilding here has been quite good, even the small details help to build a image of how Earth is like, changed by the constant invasions, but still recognizable by us.

Just a small thing is that so far, there havent been those giant mecha battles that the super Sentai genre is known for, though the transformation sequences are quite nicely done! With the direction the plot is heading in, i can see that eventually stuff like giant mecha battles will happen, and i expect it to be glorious!

Great grammar overall, i havent spotted any typo's or other such mistakes in this story, however at times, there are those odd sentences, where i just felt something was wrong with them.

Well written overall, even if at times sort of confusing with having to figure out what is going on at all, that happens mainly in the first act and is partly due to how the story is presented there. The content so far has been good, with a good balance between the action sequences, character interactions and worldbuilding. As another reviewer said, this story is mainly episodic in nature, with each arc so far bringing a new threat for those of the Lightning Brigade to fight.

I simply recommend this one, its so great overall and you most likely wont be disappointed at all, expect when you reach the end of the most recent chapter, and find out that there is no next chapter at all.

I thought Saturday Morning cartoons were a thing of the past before I started reading this. And yet here I am, up way too early on a Saturday morning, eating bran cereal like an adult, and cackling as I read over-the-top action centered around a team of plucky young kids trying to figure out how to superhero.

Aside from the cereal, I may as well be a kid again.

Watching the protagonist kiddos suddenly discover that they have powers and trying to figure out how all that works on top of being regular people brings to mind the original run of Power Rangers.

Each of kids is unique and relatable. From Anna's family problems to Jordan's overwhelming desire to be special, to Rick's wanting a family. Each of these characters feel like real people. I cannot help but feel and identify with each of their struggles as I read about them.

The changes in popculture thanks to events of the past, really help bring the world to life. It is different, obviously, yet similar enough to really sell the moments of horror and destruction when they happen.

It is very episodic at the moment, but that is to be expected. The space setting reminds me of VR Troopers, and the mystical empowerment means I can't help but think of Beetle Borgs, given the kids' ages.

Now all we need is a few talking motorcycles, transformation poses, and a well-meaning, humanoid alien that looks like a teenage kid and has to brave the perils of high school, and Kamen Rider will be covered.

You will officially have Sentai Bingo.

When you recieve the prize of officially being picked up by a big time publisher, Burkion, I shall be one of the first in line to pick up my book.