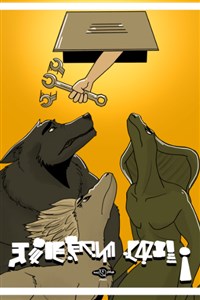 Not in that ‘but what IS that smell?’ kinda way, but in the ‘fuck me it’s cold’ kinda way. Through gloved fingers she twisted yet another insulated cable shut, thankful that the drop in heat hadn’t affected her like it did her cold-blooded friends.

“Th…there.” she sniffed again. “About damn time, too.” For a brief moment she took time to look over her ….quite honestly frankenstinian handywork; duct tape, forming putty, a couple of hasty welds, a half-used gigantic tube of black caulk – that’ll do, pig. That’ll do. Lighting up her communicator, she thumbs the bead implanted in her ear. “Engineering?”

“We lost 5 heating coils total; route power through auxiliaries for everything in my section.”

“Ok, granted, but would you rather be at 60% or at 0? Give this another day and even I couldn’t be in here without an exo suit.”

She smiled to herself. “Aww now, come on Sassy – if you’re going to curse say it clear enough for me to get it! Besides, 60% is downright comfortable for my species – consider it environmental training for the recruits!”

“[…. point taken, Caroline.]” and with the click of the bead, the communicator shut off – as the warm blue glow of auxiliary power lighting turned on, the air starting to circulate just slightly warmer than before.

“<Ok, look, I’m telling you we shouldn’t be here!>” Ssharnak hissed over his shoulder, quickly poking his head back out to the corridor.

“<Yeah, yeah, you were all ready and weaving to strike when it was all talk, but now->” with a grunt, Ashhs’skk popped off the cover to their resident human’s home terminal, quickly pulling out a few various tools. “<-that we’re here, you’re showing how lukewarm you really are!”>

“<I am NOT a lukewarm coward! Ok?! Just… look, [Caroline] is a good [human] and I just, yes, I’m curious but that doesn’t mean we should invade her privacy, ok?>”

Junior Engineer – and self-proclaimed ‘code cracker’ Ashhs’ssk looked down over his deep navy coils at his partner-in-crime flatly. “<So you want access to secret [human] media that’s not cleared for our consumption…and you think she’ll just, yanno. Break laws to give it to us?>”

“<So we turn to a life of piracy – subdue the guards, take over this ship, hold her hostage, demand the secrets of [human] cinema?>”  Ashhs’ssk’s tongue slid out, lazily tasting the air.

“<I…just want to know what she’s always referencing…>”  Ssharnak mumbled, his red tailtip curling in and around itself.

“<Ok then. Do you have a better plan?>” When silence greeted him, Ashhs’ssk sighed. “<That’s what I thought.>”

“<By Sotek-who-circles-the-world, we’re having this conversation again, here? Now?>” Ashhs’ssk complained, his head and arm stuck in a compromising position within the Gateway brand human terminal. “<We’re spoofing her biometrics, ONLY when in warp and ONLY to see what she sees! Even then, there’s going to be a delay due to quantum, uh, estrangement? Let’s go with that->” with another grunt and a snap, a small cricket-sized piece of hardware connects two previously separate wires, and Ashhs’ssk grins. “<And anyway. We can’t record anything, and this’ll short out within a few [days] at most. We’ve got another 6 months in this contract – we’re going to be FINE, ok?>”

Ashhs’ssk slid out and coiled around his maintenance box, quickly popping the cover back on to his human friend’s terminal. “<…just for that I’m making you get all the snacks when this thing works.>”

“Watch your tips, watch your tips~” Caroline sang-warned as she made her way back to the Engineering command center, the doors opening up into a balmy 30C environment. As she walked, the rest of the crew – Jornissians to the last – pulled their tails in under themselves. Flopping into the still-too-large-for-her-proportions human chair, Caroline made sure to make a big show of stretching and working out her fatigued muscles to the blue-and-gold swirled xeno.

“[Is that really necessary, Caroline?]” Engineering Lead Hsan playfully complained, his natural hiss-purring language being drowned out by the Comm-bead’s translation matrix.

“But it was sooooo much wooooork~” she whined, tapping her arm-mounted computer to begin the wonderful world of interstellar incident reporting and general paperwork.

“[Yes, certainly, walking down a few corridors and rerouting wires. Thank Sotek-who-circles-the-world we had you.]” Hsan grinned, monitoring the redistribution of power throughout the ship’s systems. “[If we didn’t, I shudder to think what we’d have to do – possibly use one of our other 8 corridors!]”

“Mmmm, Big talk for someone who doesn’t want to get a little cold.”

“Look, all *I’m* saying is that you’ve got dakimakura exo-suits and I want to get a single picture in-“

“[(error: untranslated phrase)? What brand of exo-suit is that?]”

“It looks like a long pillow.” Caroline grinned, causing Hsan to sigh.

“[So you want to cuddle up to me? Caroline, I never knew!]” Hsan tilted his head 180 degrees backwards, arms still working the controls while he stared at her, and upside-down grin plastered on his face. “[I’ll have to tell the captain to officiate our ceremony! So forward – so progressive!]”

“Oh baby, wrap your tail around me and call me-“

A Mottled black-and-gray Jornissian throws his hands up in the air. “[BY HARSAK-WHO-DEVOURS-THE-DEAD, WILL YOU TWO STOP.]”

Ssharnak sighed. SOMEHOW – and it definitely was not his fault, no matter who you ask –  word got out about their little escapade during the heater repair incident. So, what was originally going to be just two friends sharing a lifelong secret together turned into ‘let’s invite a few females to join us so we can be cool infront of them and they’ll think we’re cool and maybe they’ll nuzzle our hood flare cause we’re cool guys’ and then THAT turned into ‘it’s just a few more friends ha ha don’t worry’ until, well, now.

A good third of the entire ship’s crew is crammed into the private quarters of two Junior Officers. Another third probably tried to come in and saw it was packed – if the complaints out in the hallway are any indicator, and the rest of the poor bastards that aren’t in here or out there are probably actually flying the ship in warp…. with a live feed into this room.

If Ssharnak was a betting man (and he wasn’t, but after this would be in the market for a few vices) he’d say at least half of everyone’s body is still stuck outside in the corridor. The half that made it inside his room was comprised of a writhing mass of Jornissiary; males and females, senior officers and junior deckhands, pressing, writhing and squirming against each other for a good view…. which is kinda hot, honestly.

“<Ashhs’ssk, when does this thing start?>”

“<Well, Captain, ma’am, uh. She has to start the actual program and sign in, and then we’ll just see what she sees…>”

The Captain – and you didn’t even know her name, nor how she got here, she was always just THE CAPTAIN – bore a hole into Ashhs’ssk with her glare. “<Son. I did not come down here on a maybe or a might – this thing of yours had better work. Now either it does, and this never happened, or it doesn’t and you get court marshaled. Understood?>”

Ssharnak rummages around the snack bowl he’s holding for a particularly crunchy namptha ball and pops it into his mouth. “<Here’s hoping.>”

Ashhs’ssk  whips around and leans in close, whisper-screaming at his erstwhile friend and co-conspirator. “<You better be hoping too! We’ll both be going down for this!>”

“<What? Nah. I was just the lookout – the cute face of the operation. I got plausible deniability->”

With an unassuming crackle and a pop, the screen turns on. A desktop background of a [human] family slowly fades out to show [Caroline] and a few other females at some resort, and then to that same group of females in the water…

“<Are all human females in those scale tones? No wonder they wear so much clothing>”

The peanut gallery continues through her reading of a couple emails, a few news articles caught up – apparently [Caroline] is an investor in iridium mines, who knew? The cancellation and ignoring of a couple warning popups (Ashhs’ssk went completely still and pale when the first one showed up) and finally, the opening of a program called Netflix.

If you'd like to find us elsewhere on the internet please check out the following links:

Support "They are Smol"

Bio: From humble beginnings with a throwaway reddit account to a multi-stellar media conglomerate slowly snaking it's way into your everyday life....

We write comfy stories about cute and silly things. We also have a discord, a twitter, and a couple schematics for prototyping some unique ideas, once the time is right.