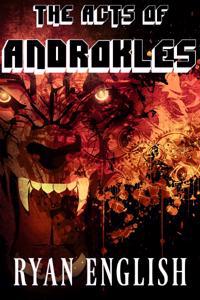 Androkles didn’t realize what had happened until after Dyana, kicking and twisting and pulling at the rope around her neck, vanished into the darkened evening woods only a few heartbeats later. Mancatchers. But before Androkles could react, another lasso fell around his own neck, tightened, and yanked him backward.

He dropped the cloth he’d been working on and grabbed the rope around his neck, but it was too late—he was being dragged across the snow into the dim night.

He got one last glance into the camp to see Agurne lassoed and dragged away as a group of men with gray faces and clothing grabbing his screaming, kicking, biting children. He tried to call out to them, but couldn’t. He couldn’t breathe.

With a hard lurch, the speed at which he was dragged increased dramatically, and when he heard hoof beats he realized they had tied him to a horse. A grinning man with the same bizarre, gray face as the others, watched him pass and then turned toward the camp. For a moment, Androkles had enough clarity to wonder who or what they were, but that ceased as soon as his shoulder slammed into a rock and started burning with pain.

Androkles’ face bulged and throbbed with the pressure of his blood building up. His chest burned and ached for air, and it took every bit of willpower he had not to give in to wild panic and death. With both hands, he grabbed his noose and managed to stretch it just enough to get a quick gasp of air, but not enough to meet his need.

He crashed into a snowbank with a heavy thud as the horse turned a corner. He was briefly grateful to miss any trees, and that it was snow instead of gravel. He considered trying to cut the rope with his xiphos, but he didn’t dare risk fumbling and dropping it.

The horse picked up speed and dashed down a straightaway. Androkles strained to rotate his body and slide along feet first, but the snow kept building up between his legs and acting as a pivot to turn him back around. He tried pulling himself toward the horse, but every time they hit a bump, his wet hands lost their grip on the rope.

When his consciousness started slipping, Androkles finally grew desperate. His chest ached from lack of air, and spots of lights swam in his vision as he fought to keep conscious. All at once, the horse slowed, slackening the rope just enough for him to draw another shallow gasp of air. Then it sped up again, and he turned to see that the rider had directed it over a large, wide, square boulder. The rider probably hoped Androkles would smash his head against it and die, and he might be right.

Knowing he had only one chance, he gave all his effort to turning feet first again and grabbing the rope as tightly as he could. He skidded forward until his feet hit the boulder, and once he made contact, he kicked and pulled. The moment seemed frozen in time as the horse spun and flew into the air. The rider tumbled to the ground as the panicked horse scrambled to get back on its feet. In the instant before the horse started running again, Androkles slid the slack noose from his neck and inhaled so hard the air felt like liquid on his tongue.

Still panting from suffocation, he drew his sword and leaped on the rider, who was trying to get back on his horse. He threw the man to the ground and stabbed him until he stopped screaming in pain and terror. The horse bolted, and the rope slipped away before Androkles could grab it.

After such a rush of chaotic activity, the sudden silence seemed overwhelming. He had a headache and he’d lost his bearskin somewhere, but he was unharmed. He put his hands on his knees and panted, trying to force life back into his extremities.

After a moment, he lifted his head to look back along the furrow he’d made in the snow. His trail led off into the darkness, along what might have been an unused side road. He dropped his head again in frustration when he realized that he’d been dragged so far, he couldn’t even see light from the campfire.

It took him longer than he was comfortable with to regain his breath sufficient to walk without passing out, but once he did, he trudged over to investigate his attacker. Kicking the man over, Androkles found that it was a regular human and the man’s skin and hair weren’t actually gray. He just had rubbed ashes all over himself, probably to blend in with the snow.

Androkles roughly went through the dead man’s possessions, which aside from the clothing, were scarce: he carried a pair of shackles in his belt and a club at his hip, and nothing more. Shackles served only two purposes—marching war captives to the homeland to be ransomed, and transporting slaves. This was no war, which meant that these men were slavers. Slave-takers had stolen his family.

Androkles stood and stared at nothing as dark emotions began to swirl in his gut. He soon realized just how bruised and battered he was from the unpleasant travel he’d just taken. The desperation of the moment had kept him from feeling it, but every part of him was now a bruise or scrape. At least nothing was broken.

Gods, Agurne was not going to be happy about this. And slave-takers weren’t known for kindness to captured children, either. Half the time, they left them to die when it became inconvenient to carry them. Pepper could attest to that quite well, in fact.

Gone. Gone. He might never see them again. He might spend all the rest of his days wandering the frozen barbarian wilderness, never able to discover where his family had been sold. He found himself trembling, and it wasn’t from cold or pain. He was terrified, like hadn’t been for years. Not even when facing Mari—there was a difference, it turned out, between trying to get a family and keeping one you already had.

He jogged as quick as he thought he could handle, ignoring the leaden heaviness of his snow-damp pants.

Why him? Why now? How had they come upon him so silently? Had Dyana led them to him? If so, why had they taken her first? Unless… She must have offended them. Hadn’t she said she found the demon somewhere? The men who owned him must have been after her. What else could it be?

No, actually, it was more likely they discovered she had one and wanted to exterminate it. Demons did not warrant half-hearted measures. That must be it. Either way, it was Dyana’s fault, and he would make her pay.

Not too much later, he found his bearskin and threw it over his shoulder. The extra weight seemed to slow him down, but the gods only knew when he’d had a chance to get warm again. Best to bring it.

Gods’ rods, how far had they dragged him? It had seemed so fast, but he was certain he’d run at least a mile. The trail was so long, and his progress trudging through the snow so slow, that both his terror and his anger had time to cool and fade. By the time he saw the flickering light of the fire dancing through the trees, he had nothing left in his heart but worry.

He slowed and stopped in his tracks when he found Dyana sitting again where she had been, bald head in her hands, shaking as if she was crying. The cart and ox were gone, of course, stolen; but his spear sat unnoticed where it leaned against a tree. He retrieved it, calmly and with purpose, as the fire of rage returned to his heart. She heard him then, and lifted her head to look at him. Her face was wet with tears, her eyes red.

“I am so sorry,” she said. Her voice, in that moment, sounded very young. He saw nothing of the self-assured woman who had been sitting there before.

It took her a moment to react to that. “You won’t be able to. But I deserve it,” she finally said, wiping new tears from her face with her bare arm and gazing into the fire.

Fury nearly overwhelmed his discipline. Not only had she dared bring ruin on him, Androkles Giant-slayer, but she mocked him as well? With a confident look of hatred, he reached inside himself for his killing intent. He’d had no time during the attack, and his children had been around then—they would have been harmed. When he was being dragged, it would only have made the horse run faster. But now? Now it was time to unchain his anger.

He called it up from deep inside himself and blasted it outward, strong and hot. It was his pure will to cut does his foes given form. It was his unconquerable psyche, too strong to be contained in his body. It pulsed out from him in waves and grew ever stronger. The dry ground began to steam. Snow began to melt. The campfire flared.

Over his twenty-five years in the army, his killing intent had grown with every enemy he slew and every battle he survived. By the end, he could make his enemies tremble and falter just by looking at them. Now, after killing the goddess Mari, it was stronger than any he’d come across since the day he saw the Hewer, the old Titan of the earth.

Dyana, however, was unfazed. He could feel her repulsing him, somehow, shielded perhaps by an intent of her own. She turned her head to look at him, then back to the fire and said, “Not bad. Maybe you can. Probably not, but maybe.”

He opened his mouth to say something bold, but for some reason, nothing clever or intimidating came to mind. He considered boasting about killing the goddess, or the time he’d killed six men before breakfast, but nothing came to his mind. He wanted to let this young woman know, truly, just how much harm she had done him and who he was, but he couldn’t find the words.

As he looked at her, he slowly realized that her regret appeared sincere. Had she truly not been at fault, despite  everything? He had no idea what to think of her, but he had a hard time thinking of her as dangerous, seeing her like this. How far did his oath of ‘regular, good people’ go, exactly?

After a long period in which no one spoke or moved, he gave up and let his intent fall. She had perplexed him. “Why are you just sitting here crying,” he asked, “and not with your slave-taker friends?”

A note from Ryan English

If you haven't given me a rating or review yet, please do. I'm also happy to hear from you in the comments below.

If you like what you're reading, please consider purchasing a copy of the complete, published novel Obstacles: books2read.com/u/mleazq

Support "The Acts of Androkles"