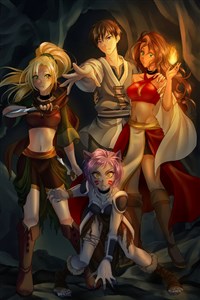 If Jake wins the local Fantasy Tactics Online tournament, he’ll have everything he’s ever dreamed of — a ticket out of town and the attention of a beautiful woman.

However, this woman has more planned for him than a bus ride to the local metropolis.  She teleports him back to her Realm and declares him her Master… and says it’s up to him to save the world.

Rival Dominions vie for power, and they are all far larger and more organized than Jake’s rag-tag group of women, but he has two advantages: the rules of this world are eerily similar to those of Fantasy Tactics Online, and his wildest dirtiest sexual fantasies act as a power multiplier for his all-female army.

Warning: The heroes have intense tactical battles, wild kinky sex, and near-constant flirtation.  The villains are disturbing and cruel.  If the idea of villains doing bad things bothers you, please do not read books ever, but especially don’t read this one.

ero fantasy. If it's your thing give it a whirl

here is where the ball drops. Or doesn't, if it's intentional.

The protagonist is the prototype of a failed millennial. A whiny, insufferable pansy that does everything he can to avoid any shred of responsibility for the state his life is in and spends all his energies whining, saying that it's unfair, and boiling in envy at the others "luck".

If that is not your cup of tea, at least you know what you are going to face.

Obviously, in the story he has a kind of "plot armor", and the people he doesn't like act effectively like massive bastards. But even then, he's the kind of person you would rather set yourself on fire than lending him a buck.

But beside that, damn solid author. One could only wish everyone spent the same amount of time in polish.