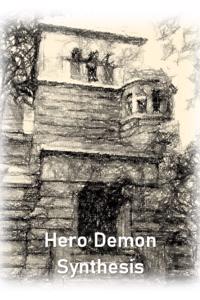 Classes; Skills; Spells. In a fantasy world that is ruled by the Gods, a person's life relies heavily on these three items.

What can a Warrior do by herself? Well, it depends on the situation really. Could a single Warrior really take on a Dragon alone?

Well, what if they were in a Party? A bad Party goes off to die. A good one though can change the world.

This is the story of Paige, a seemingly simple Warrior, who lives a seemingly normal life.

Author's Notes: Updates are every three days unless noted otherwise. Rough drafts of the next chapter are updated on my blog: http://zoidianblog.home.blog

Cover photo is an edited version of "Mount Pleasant Cemetery Walk" by JasonParis and is licensed under CC BY 2.0 / Photo effects applied to the original photo.
Photo was used as the inspiration for a typical depiction of a mausoleum in book 1.

Must say it's a surprise, started this tonight on a whim without any expectation... and it's a small gem.

I'm up to chapter 13, but it's well written, the world building is great and the characters so far are likeable.

Grammar seems mostly fine, not sure why the score for it is so low. Compare to other work, this is solid. Not everyone has large vocabulary knowledge and fancy way to structure sentences. This comes with time and practice. As long as the idea is properly conveyed and understandable, it's totally fine.

The thing I find misleading is the synopsis, it was my expectation for the plot to unveil rapidly, but no, it's a slow but interesting start. I'm a bit excited to see where it leads us!

I started this book one night and didn't put it down until I finished it. What I love is that the first half feels like basically just background for the second half. It is actually very good even with a kind of OP MC as she does not stay as the main character.

Something Actually Original on this Site

Great story that I enjoyed reading and whole heartedly recommend. Now the breakdown.

Pacing definitely needs some work, especially early on. The synopsis covers a large portion of the story and seemed almost like a spoiler when actually reading the story. To get to where the synopsis ends takes quite a while, and I could see how that would turn a lot of people off the story and give it up. Sometimes the story seems to move too slowly and I want it to accelerate, even if it is a slice-of-life story.

An original premise when this site is mired by rehashes of rehashes. Simply a breath of fresh air. The overarching story plot hasn't advanced much, especially considering the extensive length the story is at already.

It's okay, there are points in the story that made me pause and have to do a double take to understand what was happening due to a sentence having a word accidentally repeated in a different part of a sentence. A bit hard to explain, but when you see it, you'll recognize it. Also in dialogue it annoys me when there is no comma in front name of who they are addressing. For example, a sentence I might see could look like: "That's enough Paige." When it should be: "That's enough, Paige." Just a pet peeve of mine that takes me out of the story a bit.

The characters are fun, but it has really just been characters reacting to their circumstances. I would like to see the characters actually pursuing their goals while right now it seems artificially static. For example, the ranger in their group had this angsty revenge he wants to enact, but due to circumstances he can't pursue it at the moment. Instead of chomping at the bit to get that sweet vengeance, he just sort of... exists? All the characters just do the roles they were thrust into and remain static in that regards. The only exception to that is Paige, but that is because she wants to live a sedentary after such a dynamic life.

Overall I really have enjoyed reading this story, even if I have some hangups about it.

It's definitely an interesting story. However, the description basically describes what feels like the ending to the first book, which makes you want to hurry up and get to what should be the "start" of the story.

While the story has basic editing done, it needs to be gone over with an advanced eye - frequently the author uses the same word repeatedly when they shouldn't, they're not aware of how to write thinking, phrasing and wording could be adjusted, and a million other small things. Some basic typos are scattered throughout as well.

In terms of story, it's clearly planned out and mostly well-thought-out. There are some plot holes, mainly with the possessions of Paige - if one set of her armor is expensive enough to bankrupt three countries combined, that much material going missing would raise questions, not to mention how much more she has. Following a clear plan is a good thing, but the writing comes across a little dry sometimes.

Bottom line: it's worth a read, yes, but it may not be your thing.

So... this story needs a review

I am not good at advanced reviews, I’m not willing or keen to break this story down piece by piece. I will state it’s an enjoyable read. The Mc is fascinating and the author always leaves you wondering and wanting to know more. I’m enjoying it immensely and looking forward to learning more especially about her backstory.

A good fantasy story with a swirl of mystery centering around the MC. The characters are not one dimensional, even the ‘bad guys’ have depth.

Like the title of the review suggests, if you've read the synopsis (as of 15/10/2019) hoping for instantaneous action you'll be mildly disappointed. This story takes its time setting the stage, and personally I really like that.

There is enough mystery to keep you reading and the world building is great. Overall, if you like something a little more slow to start, that creates an interesting and believable world, this one is for you.

Grammatically speaking, the story only lacks in the usage of "your" instead of "you're" maybe once every few chapters. Otherwise, spelling and flow are well done. The characters are interesting and I love the setup that the author has done in book 1. Overall a quite joyful read.

If I have one word to summarize this story, it's chaotic, on several levels.

For starters, I will say that both the title and the synopsis are either very confusing or perhaps outright misleading.  For the title, 83 chapters in and, at best, we have a vague hint about what this so-called hero demon synthesis is.  For the synopsis, I don't see how that's an accurate description of the story. The story actually is:

The first 24 chapters (book 1) is about Paige, this mysterious warrior who might be a demigod, forming a party with a group of strangers in order to retrieve an artifact from a mausoleum before a demon lord gets it. Most of that is fairly rote, and is mostly used to establish characters, worldbuilding, and have fun with Paige doing the impossible.

The rest of the chapters through 83 are a flash sideways, i.e., the characters (both the main party and the demon lord's party) get translated into an alternate world where, in part, Paige never existed, to the detriment of humanity, demonity, and everyone else. That part of the story is parts dealing with an alternate reality where things are different than expected, a bit of training/school arc with the kids, and more fun with Paige doing the impossible.

That said, while I can describe that has happened, it's hard to say what the premise or overall plot is.  This is not helped in no small part because there's a pretty heavy reliance on deus ex machina and similar plot forcing devices in order to push the plot into some unexpected direction. This can be handwaved away a bit because it is fun, but technically it's a rather annoying repeated trait.

And despite the synopsis, I'm not actually sure that the story is about Paige. And to be clear, it is very clearly exposed within just a few chapters of the beginning that Paige is anything but a simple Warrior. Again, I don't think the synopsis is accurate.  Or, if it is, it's accurate in the sense that Lord of the Rings can be described as "what happens when a family heirloom is actually an evil superweapon?"  Like, it's that level of abstraction, which means it's useless for deciding whether or not (as a prospective reader) this is something you want to read.

Actually, a really big part of the story is about exploring the nuances of what it means to have a System. For big LitRPG nerds, this is fairly well done.

One bit of worldbuilding that's a bit weird is the human/demon divide.  As far as we are told, demons are visually indistinguishable from humans, though they have higher physical strength and different distributions for magic affinities. There's a bit of racism between the two which, given the lack of visual markers, means it's a really uncomfortable bit of racism. Actually, given that they can interbreed fertilely, under modern biological conceptions, I think they'd be considered a singular species.

The grammar is very good.  The style is very sharp, and great to read. The characters are really well built out and I'd almost say this is a character driven story.

Fun but not perfect

I loved this story especially the wildcard op MC. The plot could use some work but the rest is great. It doesn't take it self too serious but has enough stakes to be interesting.

The grammar and ovaral polishing is good enough to read but not perfect.

My biggest problem with the story is wanting more .

More than worth the time spent reading

The story is good, in depth characters and there are no obvious grammar flaw, so you get a good flow in the reading.

I recommend it to everyone who wants to read something and enjoy your time.