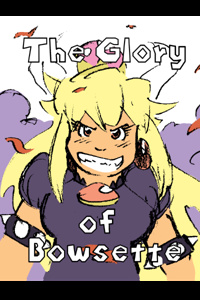 The Glory of Bowsette

The Glory of Bowsette reader survey

I hope you're still in the Bowsette world, three years since the meme took the internet by storm. The way this story exploded was so intense it still feels like a blur to me, and this wasn't even a fraction of the popularity that other Bowsette fan material got. It was just THAT big a deal in September and October 2018.

Over the years, a lot of people have asked for a Glory of Bowsette sequel, and I can neither confirm nor deny any allegations levied in that regard. A lot of people have suggested I make an original fiction "remake" of the story, too, and I've become very interested in the idea lately.

What do you think?

Before I write anything, I'd like to ask readers to fill out a Glory of Bowsette reader survey, because that will help me greatly. Even if you are NOT interested in the idea, please fill it out anyway; it only takes 2-3 minutes.

It might be a while since this old story finished, but I hope you have fond memories of Bowsette and Peach and the whole gang, because I certainly do.

Also, please read my newest story, Her Golemancer Girlfriend. It has 300% more fighting and just as many spicy yuri makeout scenes.