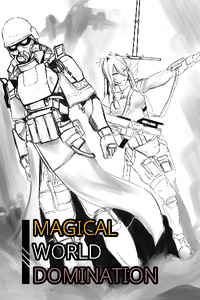 Levin Ganther, an ordinary middle-aged man with no special talents other than handing out flyers, was suddenly transported to another world full of magic and swords after diving into a real-time VR machine that he just wanted to test. Upon arriving in the world, he wasn't met with any beautiful ladies begging for his help nor a scenery that would astound someone who tried reading fantasy novels like him in the past but...

With an ability that allows Levin Ganther to use the VR game's system. He decided to live out his life in this world and survive as much as possible, albeit the discrepancies around him. With the guns he loved, the machinery that he ached for, the ability to maneuver with inhuman speeds, he will not lose to this world's fate that was laid out for him!

Cover: Yay, it's done now. Thank you Laty for creating such magnificent art, not only he draws awesome arts but he also writes stories (Not sure about if he's continuing or not.). If you have time, go check him out!
Chapter releases: Randomly
Frequency: Mostly high, for now.

In regards to Grammar, my first language is not English and I am just starting out middle school grade, so pardon me if some lines are inconvenient to read. Roughly this novel is all about me being ambitious about my skills and wanted to create my own stories since every story with genres of 'Isekais' has horrible 'Chuuni' and 'KAWAII(shit) waifu' tastes on it.

(By I mean stories, I don't mean the stories on this webpage...)

Notice:  The WN version of this story is authorized by me.

First person pov monologue with all the tenses mixed together.  The language and grammar suggest a person whose first language is not english.  If you don't mind poor english then give it a shot.

This story has a cool idea that could go almost anywhere, and also worthy of recommendation to those who want modern tech in another world. Keep it up author, have a 5 stars from me first.