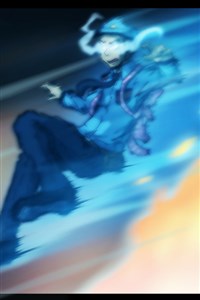 The Solar Exalted. The Lawgivers. Created to be able to bring down the gods themselves, run entire countries single handedly, and crush continents with a flick of the wrist. In order to become a Solar, you must do something great. You must lay down your life, to do what is right. And that, is exactly what Mike Schmidt has done. But, can he handle the weight of the Great Curse?

Reviewed at: A Warmup

Kay, been some time since I last reviewed anything. This story seems to not have been updated for a long time, but let's look through it regardless.

Okay, there's more than one reason for such a low 'Personal Enjoyment Score' on this one.

First, the story description doesn't match the content. We're hinted that we'll be reading some sci-fic / fantasy novel on a grand scale, but we get a Five Nights at Freddy's fanfiction. Don't get me wrong I have nothing against a good fanfiction in general, but not only do I tend to not read fanfics, I wasn't even told I would be reading one before I started the novel!

Then, the second major reason for my low score would be the first chapter. I get that, as the author pointed out in Ch1's comments, he wrote it when he was 12. However, posting it as-was, without any edits or proofreading, will deter 90% of readers immediately. Sure Ch2 starts with a much higher level of grammar and style than Ch1 but so what if most people had clicked off the story by then?

Finally, while I do see potential in the way the story is told - and I even like the MC - what's actually executed in the chapters is... Well. On one hand it's kinda boring for me early on since I do know the plot of Five Nights at Freddy's, while later on it's... How should I say it? As if someone with linguistic skill of an above-average student but with the mind of a 12-year-old tried coming up with a 'cool, fun, and thought-provoking' plot for a novel.

In other words, the plot doesn't really mesh well enough to keep my interest. The events are a bit all over the place, while the world setting is vague at best - apart from being related to Five Night's at Freddy's.

Anyway, if someone's looking for a quick read related to Five Night's at Freddys, I would recommend this little novel. Otherwise, it would require author to return to it and work on the fine details for it to be worth reading on its own merits.