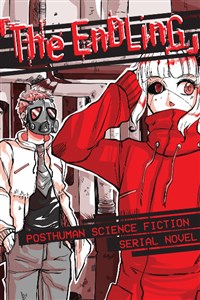 I stared at Palavar. Was this a trick? Were they lying to me? Or were...

... had my first impression been right? No, I couldn't believe it.

"Conversant's obsessed with humans! That's why he made me. Or whatever the human term is, if that's more comfortable for you. Gave birth to me? I'm sorry that you were so embarrassed about it that you didn't want to tell me earlier. There's nothing to be ashamed of." Palavar wiped their hands on their pants and fished the cup back out of the tank.

"But... your eye..." I was dumbfounded, with the emphasis absolutely on the first part of the word. I could barely string words together.

"Obviously that part isn't human." Palavar crouched in front of me and offered me the cup. "Here, drink up. I set up a filter system because the wells here are usually, hmm.... well, I think the groundwater here would kill you, depending on how your internal systems are set up." They winked at me, the 'human' eye blinking open and shut with the mechanical accuracy of a camera shutter while the dull red lens of the replaced eye staring at me. It was a little unnerving-- that must have been what the concept of 'uncanny valley' was.

"I mean..." I sat back and took the cup. I sipped at the brim. The water felt so good on my lips and throat that I took another gulp, forgetting that I had more to say to Palavar. They just crouched there, watching me as I gulped down the water. It was clean, it tasted... fresh, refreshing, not stale and musty like the old water bottles. I wanted to dump it over myself. Instead, I finished drinking and stared into the bottom. I could almost see my reflection in the shimmering ceramic. But not quite.

"...I mean I don't have any machine parts. It's all flesh." I rolled up my sleeve and pressed the cool base of the cup against my arm for a second and then lifted it, to show Palavar the pale indent that quickly flooded with blood. "That's why the Surgeon gave me over to Conversant. She said I was something he didn't already have. Gene..." I wracked my memory for her words, pushing past all the fear and betrayal I felt revisiting the event. "'Genetically unique.' That was it."

"Huh... I wonder why that's important." Palavar sat back, chin on their hand, and regarded me. "So what you're saying is, you're very fragile and needy, and since Conversant wanted you, you're afraid other people will want you?"

I nodded, although I didn't particularly care for how the phrase 'fragile and needy' sounded. When it was compared to creatures like the Surgeon and Conversant, though... it was hard to pretend that it wasn't true.

"I'm sure Conversant will protect you. He probably dumped you under the city because he knew I would check there! So you can stay with me for a while. Don't worry, I don't care if anyone is human or not. As long as there aren't a whole bunch of them. That hasn't ever turned out well. Historically speaking."

"So..." My headache was abating, slightly. I definitely wanted to drink more water. I got up, slowly, and took another scoop out of the filter tank. "How did you get your mechanical eye? Did you lose your original one?"

"No, Conversant gave birth to me this way. While it's true I'm human, Conversant doesn't really approve of biologically original humans--"

"--so you're not entirely human," I interrupted.

"Hmmm... okay, your rudeness is forgiven. I've got several other major components aside from the human ones, but it doesn't mean I'm not also human or whatever it is that you're concerned about--"

"You... have human parts inside you?" I blurted, with a possibly-trepidatious look towards my cheerful host.

"Not individual parts like organs. A large percentage of the biological matter in my construction shares a significant portion of DNA with most humans. And stop interrupting me. He doesn't like them because of their tendencies to break things and die, not to mention how unfriendly the environment is now, so I'm sure he'd say that the Surgeon made a mistake making you, and he's going to fix it sooner-or-later by storing a copy of you in his archives--"

I sipped at the cup while Palavar talked. They took off their coat, hung it by the door, and draped themselves over the couch. Behind the couch was a frame— no, a window— that showed a blue sky and green plants... could it be a tank? A world outside the city...?
I walked closer, staring, and then yelped when an animal fluttered by the pastoral scene. Water splashed all over my hands.

Palavar laughed even harder, curling up with their hands on their stomach.

"No, Ywain! It's a recording of what the world used to look like. That's a display! It's just high-resolution. Boy, you really only have been alive for three days, haven't you?"

I tried to shake off the adrenaline coursing through my system. It wasn't that I didn't know what a bird was, but that... when I thought about it... I'd never seen an animal before. When the Surgeon and I had walked through the wastes, the landscape was empty; nothing but the wind moved. At least Palavar was taking my panic well. I felt ridiculous, but that was better than scared. Maybe I could relax here. Maybe.

I sat down next to the pseudo-human, cup in both hands. They patted my leg. I wondered if they'd touched other people before, for comfort or to do violence or anything in-between. It all seemed distant to me. Theoretical.

"Do you miss it?" I asked. I felt oddly nostalgic, looking at the cup and thinking of things that I had never seen.

"No. I never saw any of this in real life. I want to see it, but that's a different emotion than 'missing' it. You can't miss what you never had."

"Have you ever been outside the city?"

"You're full of questions still! No, I haven't. I've stood at the barrier and looked out, but Conversant forbade me from going outside. It's, you know, dangerous." They didn't sound convinced.

"Why would you want to leave? It seems like you've got a pretty good setup here, with this room, a water filter..." I looked around and really took in the room for the first time. It was well-lit. Aside from the bright screen there was a window that overlooked the dark street. The furniture was just the couch, stained and threadbare, and there was a ratty old woven rug at my feet. Everything looked like it had been salvaged from the remains of the city. Judging from the state of the city, probably from the inner city, where the buildings were more intact. I wondered what else was there, if there were... human bodies...

I took another sip of water and tried to focus on the sensation and not the dark thoughts which kept slipping into my mind.

"It's boring. Everything's beige or red here. Conversant insists there's nothing alive outside, but the world is 40,030 kilometers in circumference. That's 510 million square kilometers of surface area! There's got to be part of it that wasn't wiped out, or at least an area that's recovering. I mean, you're alive, aren't you? There could be more humans!"

"They?" Palavar sat up and narrowed their eyes at me. "You said it was one person. The Surgeon? And you definitely called the Surgeon a she. So who else was there?"

"Uhm..." I was a little disturbed that Palavar was analyzing everything I said so carefully. "Someone called the Doctor? I think the Doctor was killing people and the Surgeon didn't like it. She's an artificial intelligence, like Conversant. Or... at least she had multiple bodies.... one of them was terrifying." Who knew why. The motivations of either of them were a complete mystery to me. They may as well have been gods passing judgement from up on Mount Olympus, wherever that was.

"Hm..." Palavar sat back and crossed their legs again. "So there's two people potentially after you, and at least one of them is a killer... I wonder if Conversant knows that. He doesn't have a lot of patience for liabilities."

"The Surgeon sold me out, so it would just be the Doctor after me," I said, optimistically.

"One person with multiple bodies," Palavar said. "So, effectively, at least two."

"I think the Doctor gave up on crossing the wasteland after us," I said. I felt more at ease here in Palavar's apartment, even if I kept imagining the darkness in the window... the city walls... crawling or shifting out of the corner of my eyes. But was it a surprise I was paranoid? "I'm not even sure she knows this city is here. My main concern right now is finding a secure source of food, not running away from killers."

Palavar's head snapped over to stare out the window, and with a sinking feeling, I turned more slowly to look in that direction as well, gripping the water cup like a weapon.

I hadn't been imagining the crawling.

I had been ignoring it.

The city walls were swarming with Conversant's biomass, patches of it glowing a soft grey, the color of the wasteland's twilight.

"Conversant's on alert," Palavar said, as if they were translating an unheard message for me. "Someone's here."

An explosion rocked the apartment.