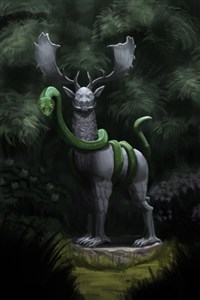 A story about the awakening, and subsequent life, of an ordinary Dungeon Core. Along with a Guide, their only goal is to survive long enough to become the greatest Dungeon.

How can an ordinary Core accomplish this when facing off against the world's ‘chosen’? Those who rush to his home for riches, glory, and everything in between.

This Core knows one thing, though. Not every Two-legged freak that walks into their Dungeon can be a Hero.

Authors Note - This will be my first attempt at writing, and any criticism is welcome. If you see any grammatical mistakes please let me know. I hope you have as much fun reading this as I will writing it.

(as of chapter 21)
'Core and Guide' is a dungeon core story in what I'd call variant 1a (natural core creation, with dungeon fairy). The core is created, builds rooms and tunnels, places traps, creates monsters, is discovered by adventurers and so on, nothing special so far for experienced RRL readers. The decoration of the dungeon and the monsters are created very nicely though.

Style: The story ist told in third-person internal style. At the start it's from the core's point of view but later also as seen by adventurers or monsters. Some scenes are shown from different points of view. The descriptions are fine. There are also some humorous elements.

Story: As written above, the plot development so far did not give me any special surprises. Compared to other stories there's less originality but while that reduces the suspense I wouldn't count it as too much of a negative because it's a solid story nonetheless. The dungeon quickly reaches above-average power compared to its level/prey but not overmuch so, we'll see how the pacing is in the future.

Grammar: There's a significant amount of typos in most chapters but the grammar is mostly okay.

Characters: This is where I'm not happy with the story. The dungeon fairy is similar to many other RRL dungeon fairies, which some people like and some (including myself) don't: a hyperactive, impulsive and immature little girl; she treats the core in an abusive way instead of following her job description which is to teach it the important things about being a successful dungeon. The protagonist core received some humanoid memories in order to teach it some basics about the world but the rest it has to learn on the fly like any other newborn which is why it needs that teaching. It's not doing badly, however a better teacher would go a long way and I have a problem with the impressionable young core catering to the fairy's childish moods and petty interests all the time. The core even notices the sub-par teaching regularly but mostly keeps silent about it, why? The adventurers that arrive after a while are mostly just fodder but some of them we see regularly. Those are shown to have diverse personalities and the readers can invest in them a bit even though they are the opponents. After a while the readers get to know the dungeon monsters and those are really cute (can't spoil too much but it brought big smiles to my face).

All in all this story is a nice read with some strengths (descriptions, monster behaviour) and some weaknesses (fairy/core interaction, average originality) compared to other dungeon core stories.

Couldn't get past chapter 4 as the Guide spent most of the time mocking and striking the MC which was supposed to be cutesy bantering but came across as abusive and tedious to me.

I don't see why a newborn should have to cater to the whims and tantrums of some entitled fairy. I don't care how many memories of husbands he absorbed, being a door mat makes for a dull MC.

As such I didn't care to read any further. If you find humor in 'wives' verbally abusing/haranguing their dim witted hopeless 'husbands' you may enjoy this, otherwise it's a meh for me.

I feel like I've read this story at least twice before. The story is a bit slow because it covers such well-trod ground. The mechanics are painfully explained by a forgetful fairy.

Hope full for a continuation

Reviewed at: Chapter 22 - Guide and Core

This is a definite 5 star for me. There are no obvious grammar/punctuation mistakes, the story flows really well, the characters stick to their personalities and the dungeon feels alive, unlike those that have bots for monsters. Keep it up!

Solid Story nothing remiss about it looking foward to where it goes from here.

The story is a lot of fun But everything I look for in a fantasy story interesting characters, a fun magic system, and why can't say for certain since it's only been 10 chapters it certainly looks like it's in a be a very fun world to explore through the eyes of Wil.