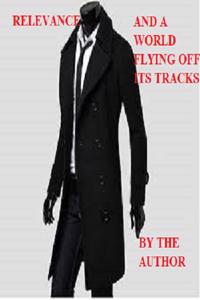 Relevance and A World Flying Off The Tracks

Trapped in a world not my own. Facing a destiny never meant to pass. Dealing with a hero doomed to defeat. Which will end first, this world or my life?

The Transmigator, a being deployed from beyond the boundaries of this reality, must undo the will of Fate itself, to save both himself and the world.

There will be no fluffiness. No OP cheat abilities. No waifus. Just one man. And The Voice of a god.

If you were looking for competent gods in isekai, you found it

If you read this, you realise that the majority of isekai that involve Gods, literal forces of reckoning and rapture, somehow always get trumped by a mortal they summon? Not here.

Here you have a god that knows exactly what he summoned, and is an absolute God about it. Theres already a hundred chapters here, and never once have I doubted the godliness of these gods.

And the Transmigrator isn't some teen with a cheat that somehow beats a god. He's just a guy trying his best.

And the characters. By golly, does the author manage trope use wonderfully while somehow making them all seem so real and personable.

This book isn't a breath of fresh air for isekai but hurricane.

Reviewed at: Stoking The Flames

The first four or five chapters are a little janky, and somewhat confusing, much like Super Minion or Simulacrum. However, once you get past that, and the mc starts to find some of his footing, the story really begins to open up.

The story is an off meta "save the world" type of deal. There are many familiar tropes, but the way that they're executed is new and fresh. The mc reminds me a bit about the guy from hitman games, agent 47. With a surprisingly intereesting voice to help him along. (Obviously he's not a trained killer, but a mix of stealth and over the top violence is the mc's go to for solving problems)

Typically I HATE HATE HATE when a godlike entity aids or assists the mc. However, it's done in a manner that the mc is relatively balanced for the world, and creates a good mix of shenanigans, serioussness, and drama. I also enjoyed how the mc had an interesting dialogue about morality. It's something most SI's/Transmigrators/Isekais never think about. Very cool. That said, the only weakness I want to point out is that the mc's companion tells the backstory of every character of any importance, and this can be jarring, and immersion breaking, hence the 4 stars on style score.

Overall, you should read this story. I never thought Simulacrum or Super Minion would get as popular as they did when I first read them. This story, this author has the same feel. IK it's a RR cliche, but I sense great potential in this one.

Way too much telling, not enough showing

I didn't end up reading all the current chapters on this, and there's no numbers listed on chapters, but I made it through ~40 chapters before I decided it wasn't worth me continuing. So maybe there's improvements past that point that make it better, but I think 40 chapters is as fair a chance as i'll give a novel.

1. The author insists on telling the reader about the world instead of showing it.

The author has built a rather detailed fantasy world with a long and deep history. And I hope you love, history, because that's exactly what you're going to be buried with. Extremely long, uninteresting recounting of past/historical events. There are huge parts of chapters that read basically the same as a history book would. Not a fictional novel.

I'm not even joking, an entire chapter is written as a police report. Same boring recounting as you'd expect from a real police report. And it's talking about events that the reader has already read about, only offering a small smidgen of new information/different perspective.

As the author starts introducing the heroes and heroines, you get... another boring historical explanation of their backstory, written as if for a school essay.

The MC basically just gets told long winded explanations about from the Voice about everything. Told. Never shown, always told.

2. Basically every character in the novel has the same depth as a cardboard cutout. Including the MAIN CHARACTER.

I honestly can't really tell you much about the main character, because there's nothing to tell. I don't know his name, where he's from, what job he had, if he has family. I can't even tell you about his personality, because as far as I know, he doesn't have one. Or not one I can discern from the chapters i've read. His only real character motivation seems to be 'I want to go home' and 'I don't want to die', which is a really boring motivation and not one that's likely to create any real character growth in the future.

All the heroes/heroines/villans are boring generic tropes who act almost entirely predictably. The novel seems to push the idea that this is on purpose, and it's some kind of satire/reverse trope attempt, but it just really falls flat how uninteresting every single one of them seems to be, considering how much time the novel spends telling you their stories and perspectives.

Not all the characters are horrible, the Voice is probably the single redeeming factor in the entire novel. He's a complicated character with complex motivations and unlike almost every character, the author didn't completely spoil his backstory in the most boring way possible which kept me interested in learning more about him.

Oddly enough, Mr. Gallant, the guy the MC ends up possessing happens to be my second favorite character because he actually has a mildly interesting backstory and character motivations. A non-mage born into a magical family, put through hell because he couldn't live upto his family's expectations, gets possessed by a transmigrator and drawn into a conflict where he can finally make a real difference, and make use of all the magical training he was forced through. Still curious about what exactly he's seeing as a stallion and why he percieves it that way. But Mr Gallant only pops up for all of 1 1/2 chapters in the 40 i've read. And 1 of those chapters was mostly a very dry reading of Mr Gallant's backstory.

Aside from those two main points, there were a lot of little things that kept bothering me.

The novel is told mostly from a 1st person perspective, but swaps around the POV from the MC to various other characters. Which wouldn't be terrible, but the perspective swaps are handled really poorly. A chapter will end from the MC's point of view, with him talking like 'I walk over here', then the next chapter is 'I go over and look at this', but doesn't mention this is an entirely different 'I', and you have to infer who it is from reading 1-2 more paragraphs. Which is really jarring.

The fantasy side of the story feels really undercooked. It really tries to hype up this whole Angels VS Demons VS Humanity thing, but angels and demons seem really mundane in this novel. Honestly, if you went over and changed every mention of angels to 'Generic Human Mage Kingdom/Family #1' and demons to 'Generic Human Mage Kingdom/Family #2', nothing important about the story changes at all. They might as well just be superpowered humans. The magic system itself feels boring and uninspired, not really feeling any different from a Dragonball Z fight.

The synopsis promises 'No OP cheat abilities.'. Well that's a lie. From the start, the MC has the ability to hide his presence, which makes it hard for anyone to notice him. So Psuedo-Invisibility off the bat. Gets given extremely powerful combat senses which make it hard for him to basically ever lose a fight, plus the ability to sense nearby people so he can't be ambushed. The MC gets a magic core that gives him basically infinite mana, and powered up magical abilities to match his infinite mana output. The author tries to handicap this ability by saying using too much mana will break down the MC's body, but in the two fight scenes I read, they both ended the same way: He mopped the floor with everyone, then afterward he starts whinging that his entire body hurts, so he goes home and gets a heal back to 100% health in like an hour. And if that isn't enough, he has a LITERAL GOD watching over his back and helping him out (who is still mildly handicapped from helping for story reasons, but it's still a GOD watching over him).

Lots and Lots of Worldbuilding (great if you're into that sort of thing, but gets excessive IMO)

Characters are mostly boring and generic, including the MC

The Voice is the only reason anyone should read the story.

Another, Better Way To Tell The Classic Story

Reviewed at: Relevance and The Third Wheel

Man nearly dies, man lives, man has to engage in over the top violence to save the day with the help of God. A classic story of an isekai protagonist done right. No more over the top fireballs or harems, just over the top C-4 and making sure all that ends well is best for the powers that be.

It's a great way to breathe life into a nearly dead horse and the fast-paced action keeps the story going without becoming exhausting.

Grammar is great and I've made more spelling errors writing this review than I've seen from this story.

The story itself has no inherent flaws or prurient disregard. It's a bit of an action flick that'll be the one movie you bring home this year, brilliant and fun.

The only weakness are the characters, who by the nature of their existence, are pawns in the hands of God. Real fun though to see the typical, clueless protagonist party be played like this though. Obvious and blatant to contrast the games being played behind the scene.

All in all, you should at the very least give it a day's worth.

This is a very odd story - the premise is original (AFAIK), the characters are believable, the plot is... well, strange. I'm enjoying it.