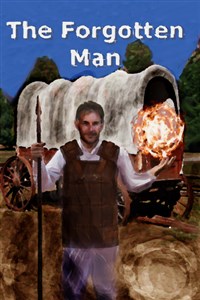 After accepting his bloodline selection, Jim had hoped to be pushed into a second user interface menu that would allow him to customise his appearance. He did not, after all, identify with the 66-year-old man that the game thought him to be. This did not happen. Instead, as soon as he selected the reptilian bloodline, Jim stared at a crystal-clear reflection of his aged self. His reflection stared back at him.

“Hurry up, snakes. I didn’t think your lot needed much water,” a gruff voice yelled in Jim’s direction. A sudden and harsh thirst tore at the back of Jim’s throat. He leaned closer to the water and scooped a few mouthfuls of water.

“Come, elder. We must hurry back to the caravan. The mercenaries are not cruel men, but neither are they kind.”

The young part-lizard girl guided Jim by the arm to a wagon and helped him up into the back. A tall man in dark leathers, without scales, walked past, counting off the (mostly) human cargo. An old man, even more scaled than the girl and even older than Jim, tried to keep pace behind the darkly garbed man.

“Thank you, Captain,” the Alderman’s voice was high-pitched and quavered and his manners were mild.

“Your people were quicker, this time. We may yet reach the foothills by nightfall.”

The caravan continued along a dirt track that obviously only saw limited use. Standing in the wagon, Jim looked around. He counted forty covered wagons. Within the wagon beds, Jim saw a variety of people, tools, goods and food. Seeing as the leading member of the civilians in the caravan was called ‘Alderman,’ Jim surmised that he had been added to a frontier caravan that planned to build a village. Jim looked to the girl that aided him earlier for some answers. He struggled with a way to begin the conversation. Should he treat this like a game or like real life? As he looked at the girl, a nameplate appeared above her head.

Jim resolved to compromise. He would speak to the girl like he would a real person, but also try to fish for quests and information.

“Do you know how much longer it will be until we reach our destination?”

“Not exactly, honoured elder,” she replied. At this point, an older woman butted into their conversation.

“Enough, girl. This old mule isn’t your honoured elder. He’s just some stray the alderman picked up when he was forming the refugee caravan. If it weren’t for his coin, this James fellow would still be cowering in the streets of Soltolan City.”

Jim was about to question the woman about the refugees when a commotion broke out in the wagons behind theirs. Thinking that there may be a quest in the offing, Jim had Vanessa help him down off the cart. Fortunately, she didn’t seem to change her opinion of him after Anne’s tirade. The alderman and mercenary captain strode past their wagon and Vanessa did her best to help Jim keep up.

“What now?” The mercenary captain’s voice held frustration and thinning patience. Jim was surprised when he saw the man’s health total. He’d been slightly intimidated by the man before but now he had to stop himself from hiding behind Vanessa or ducking behind a wagon. Jim was also startled to see that, rather than being a human like the other caravan members, the game recognised the alderman as a lizardman.

A younger mercenary, only level 5 and with a quarter of the health, walked up to the captain.

“Sir, the horses pulling the rear wagon bolted, sir. The horses pulled it off to the side of the road and it tipped. The grain sacks that were in the bag have all torn and spilled most of the grain.”

“What of the wagon, can we get it moving?”

“No, sir. The wheels on the left are completely shattered. The cart is also blocking the road and preventing the last few wagons from getting through. We’ll need a while to get this mess cleaned up.”

“Let’s get to it.” The captain sighed. “It won’t be easy to get another day’s pay out of this lot. They have almost nothing. Hopefully we can make up the time tomorrow.” The captain and younger mercenary walked off toward the broken wagon.

The alderman turned to him.

“Mr Cartwright, I don’t suppose that you possess the skills of your namesake?”

“Please, call me Andrew. I’m afraid the broken cart will be the least of our worries. That wagon held all the grain we had rationed from the journey. We had already eaten through most of it, but the food needed for 200 refugees and 40 guards, even for three more days, is not insignificant. Aside from what we can hunt, the food we have now is all we will have until we harvest our crops… and we have not yet planted our fields.”

“Alderman… Andrew… I will see what I can do about obtaining food.” Jim accepted the quest.

Jim returned to his wagon with Vanessa.

“Honoured elder, can I help you hunt? I don’t want you to be alone.”

“No, thank you Vanessa.” Jim read the bonus objective and decided that he would attempt the quest without help. He wasn’t new to gaming, it had just been a while.

“Please then, take this walking staff.”

Jim almost turned down this offer of assistance too, thinking that he may get another bonus. Fortunately, he thought better of it. With his decrepit and emaciated body, he could barely walk on his own.

The staff itself was little more than a long, bent stick, though it did have a thick, gnarled knot of wood at one end.

Jim thanked Vanessa and walked off the left side of the road, past where the broken wagon was quickly being disassembled. The landscape consisted of small hills, rocky outcrops, long grass, and Jim frequently fell against his walking staff. Upon cresting one such small hill fifteen minutes into his walk, Jim found the area the quest had obviously meant him to go. Among the rocks and grasses, a large number of rabbits frolicked and grazed.

Jim tried to hobble after the critters and while he may have had a chance as a young man, the small animals easily evaded him. His pursuit was not fruitless, however. He did manage to corner one small rabbit that tried to hide between rocks. He thrust his staff into the gap and bludgeoned the rabbit.

He hadn’t expected a single poke to kill the rabbit, but he was pleasantly surprised when he saw the damage he dealt. With his abysmal staff weapon, Jim had expected to only do one to two damage. However, he did four. He thrust at the rabbit again, this time dealing 5 damage and killing the rabbit.

Jim felt considerably stronger, nimbler and healthier after his reward. He still felt old, but he didn’t feel like he’d been bed-ridden for twenty years. The stats, he realised, must have been calculated based on his real-life condition. He only hoped that his mental attributes didn’t similarly suffer from his being in a coma.

With his newfound strength and dexterity, Jim attempted to corner more rabbits. He managed to corner and poke to death eight more rabbits. However, while Jim did obtain eight more Small Animal Meat, he did not receive the reward to his mental attributes. Jim would have continued hunting for his last animal meat, but the sky had darkened, the rabbits had returned to their warrens, and he was unable to move at any speed without tripping and nearly shattering every bone in his body. He had no choice. Jim returned to the camp, having failed the quest.

A mercenary sentry nodded to him but said nothing as Jim made his way back to his wagon through the scant torchlight. He hoisted himself onto the wagon bed and saw Vanessa reading using the light of a flaming brand. Jim was surprised to see a girl, whose nameplate labelled her a peasant, reading.

“Honoured elder, how did your hunt go?”

“I only managed nine rabbits before it got too dark.”

“Would you like to borrow my torch?” Vanessa took the torch from the iron holder on the side of the wagon, bound a length of oiled cloth just below the flames, and offered it to James. “I can come back out with you, if you like?”

Jim stared into the fire of the torch that she held before him.

“I’m an idiot. No, thank you, Vanessa, but I will take the torch.” She looked back at him, confused.

Using the staff as leverage, Jim eased himself down from the carriage and then had Vanessa hand him the torch.

He strode – as best he could – back out to the rocky field where he’d found his first nine rabbits. In short order, Jim arrived back at the warrens. He now knew the reason why he had not obtained the last rabbit meat and the points to his mental attributes: He had not applied a mental technique to killing the rabbits.

By torchlight, Jim gathered a small bundle of dried grass, and tied it to his staff. He then returned to the first rabbit warren he’d seen, lit the dried grass on fire using his torch, and shoved the staff into the hole.

Jim was astounded by the level his mental attributes reached. He did not feel any smarter, however, though maybe the effects of intelligence and wisdom would become clearer as he learned and cast spells. Now that Jim possessed the last animal meat, he trekked back to the wagons in the flickering torchlight.

I studied writing at university for three years and then became a high-school English teacher in Australia (6 years in). Hopefully, that means you will find my content to be of a high standard and that you will enjoy it, provided you can stand the British spelling of words :).