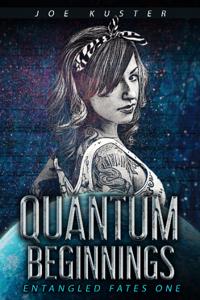 Remove Ads
Settings
Next Chapter
A note from Joe Kuster

Alex jerked awake and blindly reached for his phone. He wasn’t sure what time it was, but it was far too early for his tastes. He grumbled as his hands found the small rectangle of glass and plastic that was chirping away. As soon as his skin brushed the metal that rimmed the device, it scanned his heart’s electrocardiogram pattern. Confirming its owner, and the fact he’d moved it toward his face, the device unlocked and accepted the call.

“Bhua? Yeah?” Alex managed to mumble as he pulled the phone to his head. He had to brush his fingers through his mop of brown hair to get it out of his ear.

An unfamiliar voice came over the line and asked, “Is this Mr. Alexander Sage?”

“Uh huh,” Alex said, his heart deflating. He’d been hoping it was someone else, and unknown voices calling at odd hours were rarely a good thing in his life.

The man’s voice turned chipper, “Fantastic! We’ve been trying to reach you for some time. I’d like to talk to you about graduate study opportunities with Massachusetts Institute of Technology. We’ve…”

Alex cut the man off, “Look, I’m not even out of my undergrad. I’ve checked your costs, and there’s no way I could swing it.”

Not missing a beat, the caller began, “We have an excellent financial aid progra…”

Alex hung up the phone. He had hoped he was done with college recruiters. However, as soon as he’d gotten close enough to consider what came next, they’d come crawling out of the woodwork again.

The job market was terrible, and he had the grades, so grad school was tempting. Still, Alex had managed not to rack up student loans so far, but his savings and scholarships that covered his dorm and classes would be tapped out after next semester. He’d be stuck taking out loans if he continued. He also wasn’t certain a master’s degree would be all that useful for an IT student.

His mother and father had drummed fiscal responsibility into his head since he was a child, and his stressed-out friends trying to manage repayment had also warned him away from that approach.

Of course, he wouldn’t admit his parents were right. Their concerted harping on it had been annoying growing up, and it was still irritating. Either way, he wanted to be done with it all. Moving home each summer was painful at this point, but he didn’t have the cash to move out until he landed a job.

He rubbed at his eyes that felt scratchy from lack of sleep. It felt like little gnomes had snuck into his room with the express purpose of shoving as much grit under his eyelids as possible. He blinked a few times trying to decide if he could manage going back to sleep. After a moment, he decided he was too annoyed to stay in bed.

With an exasperated sigh, he dressed in grey sweats and a University of Washington t-shirt he’d gotten for free. They were baggy on his tall and slender frame, but he knew he’d shower and change before leaving the house. He made his way through his morning routine before padding his way to the kitchen.

“Morning, Alex,” his mom said, lifting her head from her oatmeal. Her dark hair was dangling precariously close to her food, but not quite falling into it.

He picked up the customary aroma of her strong black coffee but ignored it. The smell appealed to him, but he’d never developed a taste for it.

Alex mumbled a reply and slipped past.

Outside, over the familiar rumble of the nearby freeway, he could hear the whir of the electric mower, so he assumed his father would be in soon. Their lawn was tiny, about the size of two cars parked side by side, so lawn maintenance wasn’t much of a task.

His mother’s dark eyes narrowed. Even as he looked away, he could feel the look penetrating the back of his head like a drill.

She cleared her voice and asked in her thorniest mom tone, “Did you get your assignments in last night?”

There was the barest hint of her brogue accent. Despite being in the US a quarter of a century, at home, she’d let it slip. Most notably, when she was trying to cow him about keeping his scholarships.

Alex made an affirmative grunt as he rummaged through the squat looking steel-cased fridge with chrome latches. It was both a refurb and a throwback, designed to look like it was from the 1950s but was only five or ten years old. It was one of his mother’s many quirky purchases from the antique store a few blocks down that sold more second hand or repaired knock-offs than real antiques.

He negotiated his hand around a half head of lettuce before pulling out the milk. He gave it a quick sniff and determined it wasn’t exactly fresh. He gave a tentative second whiff before deciding it wasn’t likely to kill him and proceeded to rummage through the dishwasher for a clean bowl and spoon.

He rubbed at his temples, wishing he’d managed more rest as he set about making cereal for breakfast. He’d almost missed the midnight submission deadline for one of his summer-session programming classes. Once he’d slammed that out with only minutes to spare, he’d been too wound up to sleep and ended up playing video games for a while to decompress.

If he was honest with himself, he still might have gotten to bed a lot earlier, but complicating factors had come into play. A new girl had joined his MMO guild. He’d found that not only was she local, but they were even in the same degree program. She was a year behind him and shared a few classes, although not at the same times. She’d signed off before he’d worked up the nerve to ask for a real-world meet, but they’d exchanged numbers with a promise to trade course notes, so it wasn’t a complete loss.

Alex’s mom began a familiar conversation, “Alex, I know you’d rather stay on campus, even for summer sessions, but…”

“Honey? Can you come here for a minute?” Alex’s father called out from the front door, cutting her off. “Something weird is going on across the street.”

She leaned over, glancing toward the picture window in the living room. Outside, a collection of news crews had gathered along the street. A few news drones hovered nearby with their recording systems aimed towards the park across from Alex’s house.

Alex mimicked his mother’s move and noticed one of the vans had a SMARTLogo enabled sticker taking up half of one side. Aiming his phone toward the window, it recognized his intent and popped open his browser to the live feed. It noted his coordinates and asked if he’d like to join the on-location live chat for the stream.

Alex caught the headline as soon as he skipped the ad, then rolled his eyes. He slid his device across to his mother so that she could read it.

“Ah,” she said flatly. Calling to her husband, she yelled, “Just ignore it. A tech company is rededicating the park across the street. Some bigwig is doing a ribbon cutting.”

His dad scratched at his chest and wiped away a few blades of grass. “Huh. Which one? Think Alex should slip over and chat them up? They might have internships.”

Alex shook his head, trying hard not to raise his voice. “Those are just unpaid jobs. We’ve talked about this. I can’t manage the extra course load to graduate early and a job. It’s one or the other. I’ll be out in…”

Alex’s words were cut off as the room imploded upon its occupants. In less time than it took to blink, the north wall of the house buckled and collapsed. A tenth of a second after that, the ceiling shuddered and lifted upwards, revealing a massive grayish-silver object.

The furniture slid along at first, then shattered under the force as it was flung into the air. A half second in, the object slid into the room as it tumbled and disintegrated.

An aluminum I-beam fractured from the main body of the silver mass, launching at Alex’s father like a spear. A large rubber tire seemed to come out of nowhere, bounding at high speed in the direction of his mother’s neck. Alex stood, frozen in time as the shiny object rushed toward his position next to the load-bearing support column in the kitchen. A splintered bookcase flew through the air and missed decapitating him by inches.

Alex was knocked unconscious, his body pinned against the kitchen floor by the silver object. The debris settled with a deafening roar, much of it over Alex’s limp form.

Nearby, hundreds of grey cylinders spilled out into the chaos, throwing fine grey dust into the air and sparking. Several damaged battery cells ignited, small flames sputtering to life around them as they crackled with electricity.

By sheer luck, the bulky old refrigerator deflected the majority of the debris headed Alex’s way. Several pieces, however, made it through. A large shard of aluminum sheet metal tore into the bone of his skull, slicing into the tissue below. As his body lay pinned, bits of blood and clear fluid dripped down his scalp. His body twitched spastically in response to the trauma and electrical misfires in his brain.

In a logo emblazoned upon the blood-stained metal, a chariot pulled a sun across the sky.

Bio: Joe travels the world each week defending today's corporations and the mega-corporations of tomorrow from hackers. He's got over 20 years in the IT field, much of it centered around security and cutting edge technology. In his spare time he plays far too many video games and reads far too many pulpy books that either involve the world going to heck, stories with complicated love lives, or a bit of both at the same time.