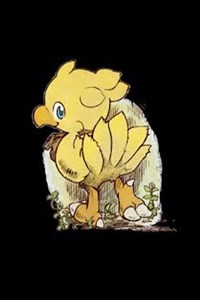 Sam Avem goes hangliding for the first time and accidentally spins, causing him to lose control and give the ground a kiss. Luckily, he wakes up, but not in his old world, but in a world filled to the brim with creatures like dragons, behemoths, and krakens. Of all the smart, strong, and bluntly overpowered creatures he could have turned into, he turned into a wild baby chocobo, in the Land of Ilragorn.

Reviewed at: Chapter 39-I feel weak

Got to love the witty jokes and the hilarious cliche duologues. A monster of a chocobo not even on its final form killing dragons making dragon hunting look like a hobby. Anyways I adore this story cute mc and very innocent plot. Ty

If you like overpowered main character, you hit the right door. Good style, average story, surprisingly good grammar and average characters. Go for it I recommend it for some detente.

Reviewed at: Chapter 29- A raccoons stealing the pumpkins...

I like this one. Pure adventure story. A little bit stiff in th beginning but better with time. This one is great for a beginner author, but readers will get bored if MC only running around without goal. Dialogue needs improvement, but battle scene pretty nice.

Read up to middle of chapter 3, before stopping, as there are no feedback at the moment, I'll spare some thoughts.

Premise promises "cute little chocobo in a big bad scary world of dragons and such", but our Mc is broken gamer with no character, or morals from the start.

Kill this thing and eat it's meat? Sure. Get + stat + skill for every thing you kill, with no upper limit? Sure.

On top of that there is strange choice of color scheme (looks decent, if you read in "night mode", but really meh in the standard white).

Main character is a insufferable gamer protagonist, without any remorse, or feelings, that make you cake about him/her (dunno).

On top of that autor stacks MC "deck" so much, that "mythical beast", that is passing by ask almost freshly hatched chicken for help (to move some rocks, that it could move itself), and gives rewards like MC did some legendary lvl quest.

All in all, based on the start, this is promises to be standart OP MC Gamer story, without any good scenes in sight. (which probably devolves into "I see the king, I slap the king, I am the king" down the line).

Don't want to poo-poo the story I read like 20% of, at the moment of the rewiew, but just don't care enough to read more.

P.S. To autor, don't be discouraged to write more, I am just picky, and compare this to the best of the best, that I know in the closest genre. (like Azarinth Healer and Kumo Desu Ga, Nani Ka? in this case.)

Everyone has to start somewhere

The story is basically just okay fun. The author is young and it's about an OP bird but it's enjoyable overall. The writing is brisk and it's really obvious that it's the first time the author has wrote anything. On top of that, it really lacks substance.

But it's a nice calming read.