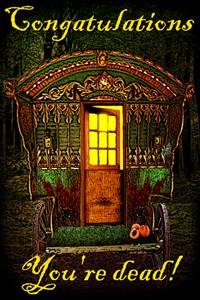 "You know they can't understand you right?"

"No need to get rude.  Fine, I'll leave you alone to do the synopis."

Slice of Life with sex, love it or hate it

'Congratulations, you're dead!' is set in a fantasy setting and at first glance appears to be just another leveling story. That changes very quickly after the MC meets the two other characters who then accompany him. From there it is a Slice of Life story with magic elements. As of chapter 24 it told about the journey to the capital and what happened on the way (can't say more because of spoilers). As the term Slice of Life implies, the focus of the story is on the tiny slices that happen with lots of descriptions and only very little focus on an overarching plot. It's told in third person internal style from the MC's point of view, the descriptions are good. There's also a significant amount of comedy. Grammar is good and spelling is excellent.

There are two problems that I (and I know that these are very personal preferences) have with this story. One is the characters: The MC, by nature of the way he was reincarnated, is totally overpowered. Within moments of arrival he wields incredibly great magical power and that only becomes more within days and weeks. At his low level he already has better magic than (no spoiler, let's call it "high-level mage in important position") and he creates detailed works of art and (re-creates/projects) modern movies just by wiggling his little finger. This leads to the story being a bit boring because there is no struggle. No struggle at all, everything the MC wants to do works splendidly on the first try. And who or what could be an obstacle to a mage that notices every little detail from a mile away before casually creating things never seen before by the people? The other thing I could live without is the large amount of sexual content (some 'only' romance, some very graphic Spoiler: Spoiler

), he quickly meets a girl and they fall in love sweeter than diabetes. Speaking of diabetes, there's also paragraph after paragraph about food.

I'm sure that other people love exactly what this story shows but I guess I'm just not the target audience for Slice of Life stories.

Who stole my immersion? :(

Really addictive, decent grammar and interesting concept.. but so immersion breaking I literally can't read this anymore. (Original review as of  #28 https://www.royalroad.com/fiction/24698/congratulations-youre-dead/chapter/367321/28 )

There is too much wish fulfillment and hand-waving and the characters all seem to completely ignore any social context. Sorrel was so careful creating the character and taking the camoflage etc and yet in the end he keeps drawing attentinon to himself and showing off, a bit of a disconnect eh?
Also, this is a feudal society and yet he doesn't even try to (or think of trying to) show any sort of respect to royalty.. wtf!
It's a wonder how the MC isn't yet the enemy of the state with all the buullshit and carelessness he operates with.
Sorrel can also emulate seemingly any modern technology by just wishing hard enough.

So.. there comes a time (#43) where Sorrel gets his level doubled (its only like 6 levels so not as op as it sounds) at the end of one chapter only for a god to show up in the very beginning of the next chapter (about 5 sentences later) and remove 90% of all the stat gains he got from that, literally calling it a "nerf", and also applying the nerf going forward making that huge pile of karma spent on grown boosts worthless. Aparrently the author does not think that maintaining the main characters agency or any integrity of cause and effect is of significance to the quality of a book.
The rule of the game like system dictating things got thrown in the trash, all system based progression from hence forth and in the past has zero meaning. And gods intervening directly means that all the MCs accomplishments now ring hollow.

THE STUFF DREAMS ARE MADE OF

The premise is basically dream of every lonely depressed ugly fourteen year old, who's pining after the school beauty. I can tell because this was basically dreams I had when I was around that age. The story has the inherent problem associated with it, those being that when we get to the end of length of a standard dream session the fun suddenly ends because the author can't continue to let his subconscious mind make the decisions. And that means that the bad writing and inconsistent pacing starts to show itself.

The dialogs are cringey and sound automated to get the exposition across, although not all of them. The hero is the universally likeable everyman who is instantly liked by everyone and everything and is also the super duper unique really bad Mary Sue. The girl is flat uninteresting cutout of "girly qualities" basically existing because the hero needs someone to care about and stick his knob into. The main problem is she exists not as a partner for the hero but basically as a pet. The inequality between hero and her is so large that hero could as well have bought a potted plant and it would have the same effect. And the buildup is basically nonexistent. The hero gets everything basically by existing around it and can for all we care act like a total antisocial jerk and people would still love him even when he sets their dog on fire.

The only thing that makes the first few chapters readable is the ackwardly funny premise and the humor starts wearing really thin really fast. By the time the hero finds the only existing dungeon far and wide and basically sells it for an unimaginable wealth in the middle of the starting arc any possible future development goes up the window because only an apocalyptic extinction event can possibly present a problem and that is not going to happen in this style of story because the narcissism of the hero would not have anything to reflect itself into.

One star for readable start that descends to hell quicker that you can blink.

Not bad. I started and caught up to chapter 15 today. First off not a lot to judge on but here goes. Story isn't bad it's well written with few if any mistakes. The characters are decent and the author is trying time and effort have been put into it. Now for the bad. Mc is Messed with by a unknown entity and has every reason to be a dark gritty anti hero badass. We get a super fluffy op mc in a rainbow world were the darkest thing is two almost rapest bandits that for catching he has everyone's love. Two bandits? Seriously? The romance is forced to the extreme I'd believe the "love" more if he was using plant spores as a mind control but nope just instant op fluffer mc. Take my criticism with a grain of salt I like much grittier stories and this isn't my style. If you want something light and easy to read that's actually pretty well written this is perfect for you.

This story has a lot of similarities with Death March. It's a slice of life isekai. Lots of food, minimal fighting with an OP protagonist. Heartwarming at times. Protagonist reinvents stuff from our reality into their medieval magical equivalent. A slowburning, relaxing adventure in a magical world with some comedic elements.

Their are small differences ofcourse, most notably the sex. This story has some (skippable) raunchy scenes.

Grammar is good. Above average for this site.

Now the bad. The conflict is......forced. Because the protagonist is so awesome and generally a good guy, his reasons for getting into fights is to protect himself and other people. The antagonists have no reason to attack or cross him, yet they do it anyways. His choice allies don't seem to have any ulterior motives and like everything he does. He is always in the right and always makes the best possible decision, even winning a battle in a war without having any casualties. He's just too damn perfect. At everything.

WARNING: This next part is a bit of a rant.

But that wasn't why i dropped this story. I stopped reading because after his first real fight, his first dance with the reaper, the first actual close call where he almost dies, he laughs it off. And why? Because the perpetrator is a love interest. The reason why he wasn't being all OP in this particular fight as opposed to all the other fights he had? No reason. The reason why the most paranoid character got careless? No reason.

The reason i stopped reading is internal inconsistency.

This story starts out well enough. You get a guy reincarnated into a new world with magic which he begins to explore. A light, fun read up until he makes it to the capital. After that it's constant bad sex puns, and all the characters crying about how hard of a day they had. Very literally in almost every chapter they cry or have a talk about their emotions. I can't continue this.

Reading this story is fun.

It is nice that everyone and everything is NOT out to screw over the MC.  I am a bit tired of reading those dreary tales.  Also, the MC doesn't go around screwing over other people just because he can.

No, this is an admittedly over powered character who is just trying to live in peace.  The fact that he cares about the people around him draws him into conflicts.  That and the fact that he does like to show off can cause repercussions of their own.

This isn't a comedy but the characters themselves have a sense of humor.  That humor then translates into the story pretty realistically.

Humor (not comedy) is one of my favorite styles to read and SimonSaysWrite does humor very well.

This rather silly at times story is full of heart warming scenes with enough seriousness to avoid being stupid.

Interesting take on the isekai and system trope with an OP MC and a cute supporting cast.

This is a great lil story

I love it. It's fun, fairly lighthearted to start, but it gets dark just enough and well enough to keep the story interesting!

Lighthearted fun with an adult twist!

really enjoying it, and while it’s a little slow paced I still get a thrill from reading it. Thanks for the content. I don’t want to influence the story to much but I request not to leave Abigail out of the harem. He doesn’t need to bag every female but I’d hate to see her heart broke after the awesome peekaboo scene she was a part of.