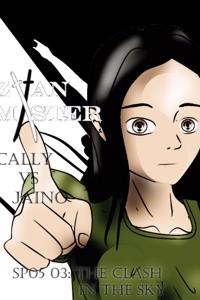 The reader of Actions

Teaser: I've retired for my freedom and to find peace. I was born a knight with no inheritance. What could they expect from me? —Jaino. I've tried to purge the catalyst. Is my strength not enough? —Jesifer.

Blurb: Including his guild master, many lives had lost to end a calamity. Jaino feels guilty. Still, the first prince of Jelfyr assigned him as a higher official. This has made him hiding to avoid conflicts.

Wanting to find peace, he accidentally meets Criselia, forcing him to accept an agreement. Consuming many lives, her demonstration has left him no choice.

Meanwhile, Jesifer, the queen of Jelfyr, she receives an urgent report from the JSA.

Attempting to end the battle in the wide plain while avoiding casualty, she instead meets Dandia’s ruler, seeking for the strongest.

The outside world now slowly unfolds.

BTW, since the review title wasn't edited. I have to say, my work is not a poem compilation. I'm writing fiction. But I'm not a writer, I'm just a reader. :) P.s

Past tense - When I just narrate a  past without much actual actions. I mean like a news, or just telling or reporting the past.

Hallo guys, Help me locate my typos on Story Arc 5. I still don't want to edit Story Arc 1-4. I can't wait to reach story arc Chapter Six(I won't spoil). My outlines and very huge flowcharts are waiting. Sorry, about that, I can understand English without format so, each time I'm looking for typos I was hooked in my story and I didn't realize I forgot about them.

The reader of Actions

Brief explanation from me

I have a feeling that there are multiple reasons as to why no one reviewed this work yet. First, it's obviosuly poetry-oriented, what makes whatever review people make by this site's standards... feel wrong. Theoritically, all the problems I'm about to describe in this review can be written off as 'poetic freedom' of the author, given the style of this work. However, since this is a site that's mainly for novels/books, I will review it as such while still trying to be as neutral as possible. So, keep in mind that my scoring wouldn't be the same had I conceded and simply judged your work as a work of poetry.

Either way, let's get into it, shall we?

As far as my tastes and what I expect from a book/novel/text which I read, this work couldn't be further away. By no means is this novel (?), this piece of prose, bad in the sense of the word 'bad', but it's not for me. Similarly I believe that the very majoirty of people on RoyalRoad will find this work to be not for them.

Now for the more objective part of the review~

What can I say, it's confusing and all over the place. The author tries to tell the potential reader too many things at once and explains too much at once. This, in my humble opinion, will lead most people to click away since the prospect of reading something that fully seems to be confusing in its execution will be mentally draining.

I'd suggest deleting all of this and writing a simple explanation of what this story is about within at most 2 short parahraphs. As for the grammar gimmicks, if readers can't figure them out on their own while reading, then there's something fundamentally wrong with your usage of tenses, to begin with.

Please swap what's in spoiler tags. Every time I go to next chapter my eyes are assaulted by the white-pinkish background of those pages. You've even indicated that the text part is the 'RRl version', so why isn't this one the first thing we're seeing? Come on...

I don't like descriptions separate from the main text of the novel/book/whatever this is.

I also don't like the short and jumpy lines that by the necessity of the style you, as the author, have decided to use, don't really connect with each other gramatically. This is partially a style and partially a grammar issue tho.

Overall it wouldn't be that annoying had it not been for the peculiar choice of 'poetic-feel' for the story on your, the author's part, so it's not that bad all in all.

Okay, I get that the first few pages are a poetic introduction and I'm not well-wersed in those matters, so I won't take them into consideration when scoring grammar. I will say, however, that they were painful for me to read through.

Beggining with the first real 'chapter', grammar suffers from the style chosen for this work. Perhaps if someone is looking to read a compilation of poems, then he would be satisfied. For me, however, it's nothing but annoyting when nothing connects gramatically from paragraph to paragraph and instead jumps from one thing to the other. Sure there is flow of events, but grammar...!

Let's leave the weird gramatical usage of words and sentences for later. First, let me point out the utterly distracting mish-mash of tenses and passive structures in the chapters which are an utter pain to read. Allow me to give examples:

Here's a sentence taken out from your chapter 3.

"Furthermore and again, those cries are successively yelled by a boy and a girl— whose bodies are shaken; eyes are gushing tears; hearts are beating fast —while sniffling and sometimes coughing."

Now, here's how I would fix this sentence up away from the poetic style.

These cries were of two children, a boy and a girl, whose bodies were shaken and whose eyes were gushing tears. The two little ones were sniffling and coughing, in their chests their hearts beating fast.

So, does it feel better to read now? It does for me. I get trying to write in a poetic fashion, but in my opinion it doesn't excuse being all over the place with your wording. I can close an eye for the first two pages since they were poem-like, but the following chapters won't be getting the same benefit of the doubt.

Let's take another example. Chapter 5 - tho for some reason I clicked more than 2 times to get to it from chapter 3.

Jaino has been staring at her face. Afterwards, he wipes the tears between her cheek and eye with his finger. "You and your brother survived until I came. This experience has made both of you become mature enough to face this world. So, stop crying anymore; be strong. With the event that has happened in your life; treasure your life and stay alive; until then, you’re invincible." His words approve by his smile.

And now for my version... (fixed the tenses in context of the paragraphs in the chapter too, feel free to go and take a look)

Jaino looked at her, his eyes drawn to the tear flowing down her cheek. He raised his hand slowly, as if he didn't want to startle her, and wiped the tear with his finger. He then smiled gently and said. "You and your brother survived until I came. You've already survived the worst, so cry no more. Be strong and smile, as to treasure the life you've been gifted with for the second time.'

Well, yeah. Maybe I'm blind to the wonders of poetry, but the majoirty of your text comes off as hard and unpleasant to read, at least to me.

Finally, there is the simple issue of normal gramatical mistakes. Using past tense verbs when present should be used, using past tense form when the senence structure calls for past perfect form etc. You could once again write it all off as 'poetic freedom', but it's not a poetry site. To me, those are mistakes.

Characters... suffer from the level of grammar and the choice to leave pretty much everything apart from the few key sentences to reader's imagination. I'm annoyed that I have to figure out whether the chapter is speaking about a living tree with a soul or a person, then I just follow events about which I do not care. Tropes, tropes, tropes. It seriously reads like an ancient comedy of sub-par quality. I tried to read more of it, I did. But the level of grammar and the lack of any plot for me to follow killed whatever interest I had.

I feel like saying only this much would suffice to express my feelings on this part of your work, but for the sake of making myself as clear as possible, I will spell it out point by point.

- To get readers interested in the future chapters, you have to have either a foreshadowed plot towards which the story will develop as we get to know the characters, or actual relatable characters who are likeable, hate-able, intriguing, anything for the reader to want to interact with them more through the following chaptters. This story has none of that.

- For characters to be interesting, you have to actually give them some personality and background. I don't know if it changes later on since I wasn't patient enough to go beyond arc 2, but up until then everything was full of stereotypes and annoying attempts at 'humor' which were killed by the lack of world in which those jokes could actually play a role and be amusing/fun.

- For me to get immersed into a story, a bottom line for the flow of the paragraphs and readability of the text in terms of grammar must be met. No matter how good the story and characters, if the novel is unreadable, I won't be able to get into it and enjoy what I'm reading.

That's pretty much all I have to say. I feel a bit bad for leaving such a harsh review, but I refuse to sugarcoat the score part of the review because of that. I'd rather be honest and hope that author takes this review as an opportunity to rethink parts of his/her approach and possibly changes his/her story up a bit.

If he/she wants, that is. If it all falls under 'poetic freedom', then I don't get asking anyone for a review.