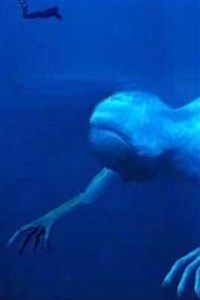 Doth walk in fear and dread,

And having turned around walks on

And turns no more his head

For he knows, behind him

— The Rime of the Ancient Mariner

So, who decided that Subnautica needed a Dark Souls difficulty?

Alright, it has been over a year and no one made a review for this story yet? That's a honest tragedy. That said, I happened to find this story just as its author started to pick up the pace again so this would be a good point for its first review.

Abyssus is a story of a young boy in an escape pod, finding himself in a deep dark abyss surrounded by monsters. To turn the situation even more dire, the author gave him an OP exosuit and weaponry and then yanked them away after a first use, showing that the ones designing the pods considered microscopic atomic bombs and lightsabres to be the bare minimum requirements for even adult refugees to survive in this abyss. And the kid no longer has either.

The story is a honest fresh breath of air amongst all the Isekai Marty and Mary Sue stories that crowd Royal Road. The kid is not at all overpowered, coddled by the story or by any means just plot-armouring and snoozing his way through this. With every gain thus far, he lost something. Or a lot. It's also an interesting setting more creative than so many others, being underwater with high pressure.

As such, I gladly give it a high Style and Story score for doing something different. I'd personally recommend maybe adding a bit more to the sheer unyielding and uncaring pressure, isolation and darkness of the story, because for all that the author is succeeding in painting a dire picture the feel of the story still just eludes their writing.

Just a little bit more to really immerse the audience and then crush them under the pressure of a million atmospheres. Better descriptions, more tense predator scenes and the already present inescapable nihillism more pressing, and I'd gladly improve both to 5 stars.

The characters work well for what there is to work with. Just a kid and their AI suit that grants them the bare companionship for conversation and exposition, and here the author shines by making it work. Nice job!

Grammar is fine. I've seen only two errors, both t-related ironically, but nothing to really complain about. Oh, but be sure not to use land movement in the sea, occassionally the boy does something like roll or jump which isn't really possible underwater.

Abyssus has all the makings of a good story. The plot line moves along at a good pace, and the settings are interesting, with some good imagery. As another reviewer said, it is bascially Subnautica, but with a kid suffering through it instead of an adult scientist.

I like the AI - Mion, though I feel she could have a little more headspace. It would also help to see a page break when headspace is switched from Kin to Mion. I was never truly confused during a switch, as the writing is clear and concise. But, it would be a nice heads up to a reader to have an extra space between their points of view.

I like the characters, the premise, and the setting, but there are some aspects that could use improvement.

For instance, the start of the story is a little thin. I think chapters 1 through 6 could use stronger descriptions. It would be nice if they matched chapter 7 onward. At chapter 7, the writing starts to get stronger, and I really appreciated the improvement. Overall, I think the story could be further improved with a round of light revision, nothing major for plot or characterization, just enough to tighten up the writing and flesh out some of the earlier sequences.

At some point, I would like to see Kin encounter another human, but that's just a wish.

Oh, and this next criticism has nothing to do with the story's quality. I just hate his mom. I hate when a parent throws their kid into a terrible situation and says, "whelp, hope you can survive." I understand there are real people that would probably do that, but I could never. Could she really not cram herself in that pod with him? I'm imagining its the size of a subnautica pod. If that's the case, she could fit. Maybe, I'm being unfair to her. She had no idea the suit would fail, but the poor kid's been beaten up by a robot.

It's hard to find horror on Royal Road, and it's a genre I enjoy, especially desolate locations. I'm glad to see someone writing in it.

If Subnautica was on drugs and had sex with HP Lovecraft's creations, you get this story.

Compared to the average (terrible) isekai stories on this site, the character development is flawless. The plot transitions smoothly and there is little to no plot holes. My only complaint is the narrative aspect of the story which is unique but some of the dialogue feels forced at times.