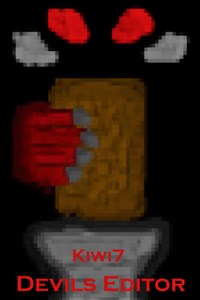 I reincarnated in the Devil's novel!

"Is there something wrong with you Lucifer!? What main character is weak as piss! Fix me unless you want me to die!"
Max Jensin finds himself reborn as a weakling in his classmate's novel. Now, with new-found supernatural abilities, he must survive in a world where demons and monsters are hiding at every turn. Can he rise to the top and survive until the end of the book? Or will he stay weak forever and die?
"Lucifer! Don't mention me being weak and dying. You'll foreshadow my death, you tool!"

There are minor mistakes on capitalization, punctuation, and miss-types, but they're pretty commonly seen when stories are unedited by an outside eye.

The writing is easy to follow and read. My biggest complaints have to do with the way in which the litrpg elements are presented in strings of brackets or curly brackets. It can be kept this way if tables are not used, but the organization/formatting still needs to be improved and made more fluid/integrated with the rest of the story content. As mentioned by others, the spacing is the biggest reason why the litrpg and rest of the parapgrahs feel disorganized or too long for scrolling (like on mobile).

Lastly, the switches in POV with Dago and Jinwoo as well as accompanying shifts from first to third are very very jarring. They occur way too frequently in a chapter, making it confusing and difficult to piece together the proper timeline. By separating the POVs of each character into another paragraph, this would greatly help the flow of the story. Additionally, I would change the whole of the story into third person if you're going to be focusing deeper on more than just the MC as it seems you are with Jinwoo as well as Mio, etc. Possibly even, reduce the time skips with the *** or make it clearer when sometihng is a time skip as opposed to a POV shift.

I think that Lucifer as the creator of the litrpg world is very unique, and I enjoy their banter (with Dago). I hope that this point of difference from other stories can be preserved as it was entertaining as well. As for the MC himself, I hope we can see more of his backstory, especially with Lucifer calling him a professional. In general, I want a little more from all their characters in terms of their thoughts, emotions, motivatations, and goals.

You have sound ideas, but the execution is disorganized. This has to do in part with the Style portion, but overall, the flow of events and development of the plot could be richer and more fluid. The transitions are definitely a point that needs to be worked on. As for the world details like the Wendigo, book, quests, and overall litrpg and game-like world mechanisms, they had some fresh elements to them, so that's nice. But as pointed out on chapter 8, it felt inconsistent for the world to run freely without Lucifer, the creator.

This story's attempts at delivering a different rendition of the common litrpg are very promising, but unfortunately, it gets bogged down by poor organization of the plot and the litrpg elements. Also, the story could be a little more immersive and deep in the details on the settings and characters.