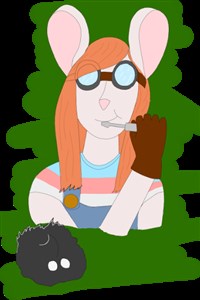 A Mouse in the Circuitry - A Kammi Kettu Story

Someone has to make gadgets for all the would be heroes, and that someone might as well be Bridget, a relatively popular tech youtuber turned genius mouse girl during the Emergence. How did her early days go, and how different was it in Europe compared to the states? Well, read to find out.

Think the Kammi stories are gloomy? Read this!

There is a stereotype that all the stories in the Kammi saga are just bundles of misery. But then, out of the blue, here comes Katie. There is just so much joy here. Maybe because it's written from a European perspective and not from America. Haha.

I love what Katie is doing with Twitter updates in universe. It lends the story a level of novelty but doesn't get too cutesy with it.

So far there's really only one main character. She does seem a little overpowered but fuck it. I want a hypercompetent trans girl tech genius. Trans folx deserve a fun upbeat character in a world of shittiness. I'm just looking forward to her making more tech and maybe some enemies.

A worthy addition to the Kammiverse

A mouse in the circuitry manages to perfectly tie itself into the source material, while reamining much more bright and hopeful than the rest o the stories.

Set in Europe rather than the rustbelt American city of Penrith, a Mouse in the Circuity is about a trans popular tech youtuber who finds herself transformed into a savant of technology Mouse-girl.

Bridget navigates her new gifts, being queer and an Emerged in an world unfriendly to both, being dangerously desirable to those who wish to make use of her talents, and the responsibilities her position brings.

I wholeheartedly recommend this heartwarming story.

HELP I GOT CAUGHT IN THE STORYS MOUSETRAP

Okay, honestly I am terrible at writing out my thoughts and can't judge style for shit, but here goes nothing.

Now, does the story have a lot on the subject of a trans person. Yes it does. SO what? The main characters are trans. The subject kinda comes up, and I love how the characters deal with it in the Emergence.

Want me to talk about plot, style, etc? Look at the stars. Nuff said.

A really great addition highlighting other powers and how people are dealing with them. Provides a nice slice of life in a semi dark universe, though I can sense a dose of reality getting ready to smack us in the face in the distance.

What can I say that hasnt been said before. Katie manages to write a Kammi-Kettu story that fills you with warm fuzzies all over. Full of lovable characters in an almost slice of life setting, this installment to the universe gives a well earned break from the harsher realities our favorite emerge go through

I love the cute lil mouse and her growing family of misfits. She is totally starting a commune of abused people. Keep on rockin' lil mouse girl.

Katie's writing is always great, from superhero school to this one. I can feel the emotion in her words. She also takes my lore policing very well hehe. Keep going Katie you rock!

The Genius Mouse-girl, And Her Kindness Touched Me

Overall this is one of the few, Lighthearted and sweet story that is not too dark in the Kammiverse!

The style is good, and I love the part of the reference to where you live that you have put in your story. It is really fun to read, heartwarming and a little bit educational.

The Story, the More we learn about Bridget family and past.... the more we want to cry or commit murder... Luckily, We have a Cute and adorable shark girl and a fox fluffy dragon robot, so we have our anger slowly die in their cuteness <3

The grammar is very good, I didn't see typo or errors for the moments!

The character... All have memory, past, feeling, and dreams... They are all so Alive then seeing them in real life would be like meeting an acquaintance that you know from a long time... They are so much alive that it made me cry when I see them suffer and be in pain. They are truly lovely and incredible!

Overall it is a great story thanks, Kathie!

Very Cheesy, on a number of levels!

One of the Kammiverse stories, Mouse in the Circuitry takes a different perspective from the general Kammiverse stories in a number of ways. Whether it be the different geographic location, the more positive tone in the writing, or the fact that the protagonist was already transitioning pre Emergence. It is a cute slice of life that brings up family and how it is what we make of it. The only reason I take off half a star is that I have difficulty with the lack of an overall plot. It is a lovely and enjoyable read, but it can be random.

A lovely story, Mouse in the Circuitry is the type of story that has you sold on the characters the moment they appear. Due to this it is almost always filled with wonderful chapters where your heart melts alongside the in-universe audience.

Everything the three main chraracters do is realistic and responsive towards the realities of someone who would go through these events and their personalities. The generous Mouse Mum responds to an intruder as she has before, but then loves the hell out of the nervous and excitable Sharky Šárka, whilst the fox-dragoo looks on with her lego.

As mentioned in other reviews, the story manages to show the disaster within the Kammiverse but in a way which is uplifting, light and hopeful.

It is also a loveling fitting addition to the universe by focusing outside of Penrith, and giving the readers of the universe a broader perspective and position on the world created through the Emergence.

Of course, no story is perfect, but the issues within Mouse in the Circuitry are ones which are wholeheartedly accidental and ones that can be rectified rather easily.

- The first two chapters are the largest cuplrits of this, with the first chapter misspelling algorithim (something already fixed) and the second having one sentence which doesn't make much sense, "it would be significantly harder to disappear me.". However, simple revisions are all that is needed to solve these problems and do not distract from the greatness of the story.

- The other problems within these chapters is the inclusion of references to reality, these being Disney's House of Mouse (referred to as house of mouse) and Kagamine Rin (Dare's voice synthesizer). Whilst grounding your work in reality makes it more accessible to readers doing so in such a way that leaves some readers not understanding your references is, to me, a detriment to a story. The most simplistic solution to these problems would be to add exposition to them as a part of the story, as you had done when revealing that the story is based in Czechia, or to add them in as a part of an Author's Note, as you did with Trans*Parent.

- The latest chapter at time of writing this, Chapter 10, is - to me - one of the least well written, this is because it is largely written in Bridget's spoken language and. Whilst a good representation of spoken language, having much of the chapter be speech from one character detracts from other elements of the story, such as the internal dialogue and thoughts from Bridget as well as the quips and intelligent back and forths between Bridget, Dare and Šárka.

As mentioned before, these issues are all rectifable, and it is completely natural, understandable, and normal for an author to have highs and lows, what should be taken from my complaints are things to incorporate into any future chapters and by no means at all was I discouraged from reading on from these. Also, my second complaint is something which is, most probably, something personal is not something all readers will care for.

Honestly, I can't wait for the next update and to find out where the best Iron Mouse Mum, Fox-Draggo and Sharka (:P) go.

An actual review of my wife's writing

Mouse in the circuitry is good. As a kammiverse entry it is very friendly to newcomers (like me when i started reading it), an enjoyable fun introduction to an universe that is diverse in style and tone. If you think that the previous kammiverse stories were to doom and gloom then this is the story to pull you in.

But if your not interested in any of the kammiverse stories whatsoever i would still highly recommend this story as a fell good, kick bigotry where it hurts super hero story that is adorably cute .

All in all i give this story 10/10, it is simply a goofy,fun,shamelessly cute story that will leave you with an need for MORE.