The Proud Chevalier and Her Loyal Knight

Remove Ads
Settings
Next Chapter
A note from sentrydown

This document is designed to serve as a setting primer for this story, for the readers that want a bit more information of the locales that appear in this story. This also helps me avoid doing massive information dumps in the middle of the story, as I like to try and put in information organically. However, I know some readers enjoy having a plethora of information, which is why I have created this document.

Reading this document is by no means mandatory to read The Proud Chevalier and Her Loyal Knight.

NOTE: The map currently has an error. Republic of Khodun should be Empire of Khordun 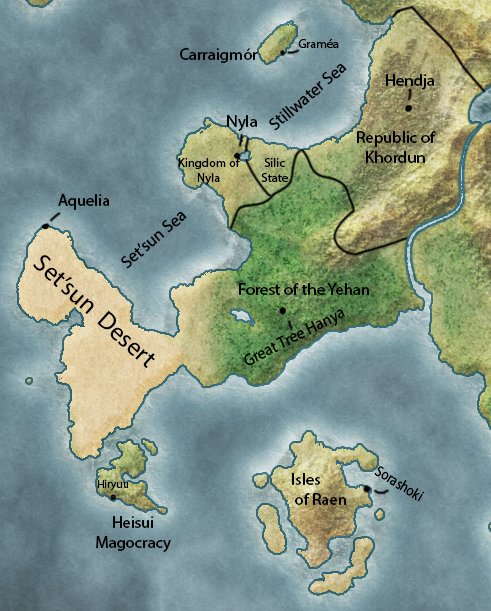 The story takes place in a world known as Eulai, named after the First Hero who saved the world during the Era of the Dark Sun at the cost of her life. Her two children, the Blue Prince Roland and the Green Princess Mora, travled to opposite ends of the world, each founding a continent that would be named after them. The eastern continent, Mora, is the primary setting for this story, specifically the southwestern part of it.

The Empire of Khordun is a powerful country that was founded by the Iron King Maresy Rothon. Once a former mess of fighting city states, the Iron King managed to conquer each territory in order to unite them against the threat to the north. Due to his actions, the empire was able to maintain prosperity for many generations.

The Kingdom of Nyla is a situated on a peninsula between the Stillwater Sea and the Set’sun Sea.They are a gentle nation with a agriculture based economy. They are home to a sizable mixed race population.

The Silic State is a small nation located to the east of Nyla. They are an educated nation that values academics. They are home to the largest regional magic academy, Oslo.

Carraigmór is an island nation that prides themselves on their martial skill. They are mighty warriors, with a saying that one of them is a match for five mainlanders. They have a sizable Gero population.

To the south of Nyla and Silic is the Forest of the Yehan, a large section of of land covered in dense forests. Very few non-Yehanians enter the forests, for fear of getting lost. Within the forest lives the colossal tree known as Great Tree Hanya, the center of worship of Yehanian society and where many Yehans call home.

The Holy Theocratic City-State Aquelia is the center of religion for the followers of the Holist faith. Fifteen years ago, the city was besieged and captured by Holist heretics during the Siege of Aquelia by a group known as the Sovereign First.

The Isles of Raen is the home country of the Qualim. Composed of numerous flying islands, the floating country is a unique landmass that is nearly inaccessible to outsiders. The top thirteen clans make up the governing body of the islands. They are known as the Thirteen Great Clans. The capital is Sorashoki.

The Heisui Magocracy is a country of mages and shamans, who link themselves to the spirits of the old. Lightly forested, and with multiple islands, the archipelago is home to many citizens who have left the Raen Islands due to conflicts with the ruling aristocracy. The country is headed by the the Mizuchi Keiretsu, a conglomerate of the highest ranking spellcasters and their families in Heisui. The capital is the port city Hiryuu.

Magic in Eulai is divided into six elements: the four physical elements of fire, water, earth, and air; and the two karmic elements, dark and light. Not everyone can use magic, and those who do often go under training in order to manipulate the magical energy that flows through the world. The capacity to use magic is limited by a person’s mana, the representation of a mage’s magical energy and ability to manipulate it. Users of magic, known as mages, are only able to cast magic corresponding to elements they are attuned to. Most mages are only attuned to one element, a few are attuned to two, and very rarely is anyone attuned to three or more.

Utilizing magic often requires a foci, an item wherein mana is channelled, focused, and formed into a spell. Often, a mage’s foci is a wand, a simple rod or stick with magic focused at the tip. Other foci include staffs, books, rings, and for the more physically combative, swords, daggers, or whatever weapon that mage wishes to use. Experienced mages are able to forgo the need for a foci.

For most, casting magic requires some form of a chant followed by declaring the spell, with longer chants being associated with more powerful magic. However, some are able to cast some magic with mental chants, and rarely can someone cast a spell with neither a verbal chant or a mental chant.

This is a very brief description of the races. For more information, please visit the link found in the post-chapter notes.

Adaptable to nearly all environments, humans are the most common race found in Eulai. Coming in many shapes, sizes, and whatever physical trait you can think of, they are everywhere.

Four-armed strongmen who have a weaker connection to magic than others. Larger than the average human. Hardier and tougher than humans, but more oblivious to the finer things in life.

Winged people whose children lack gender. Physically weak, yet quite perceptive and agile. Their society is centered around their clans, families with long histories stretching many generations. Their shorter lifespans push them to live life to the fullest. Their children are born sexless and choose one when they become of age.

Similar to humans in most ways, although slightly weaker constitution wise. They have a stronger connection to nature and magic than other races. They are racists, not being friendly towards non-Yehans. They can be identified by their signature red eyes, a trait only found in those with Yehan blood, and slightly pointed ears.

Due to Yehanian society, Half-Yehan are often not allowed to live with pure Yehans. Often times, they live with the non-Yehan parent, occasionally seeing their Yehan parent. Though generally accepted in general society, they still bear some of the stigma of their birth.

Half-demon and half-human, these people are ostracized by much of the civilized world. Not all are evil, and are simply trying to find their place in the world that rejects them. Many bear outwardly physical signs of their demonic heritage.