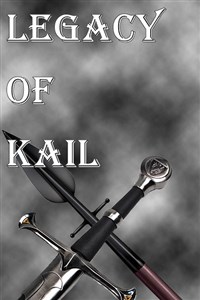 The white-haired Kail is a member of the mercenary guild Anima. Having seemingly appeared out of nowhere one day, his life before Anima is surrounded is unknown to his peers. Now he takes on various jobs that have him travelling across the land of Terra Deorum, meeting a variety of friends and foes in his travels.

In a world of warring nations, magic, and monsters, Kail has many obstacles to overcome. Although he has his own unusual ability to help him on his way; the ability to see and speak to the dead.

Reviewed as of Chapter Ten.

The Legacy of Kail is a fantasy action/adventure story situated around Kail, a member of the mercenary guild named Anima. We follow Kail on his many adventures across the land of Terra Deorum where he makes friendships whilst doing his duties.

It’s like the Witcher meets Fairy Tail which I think is quite nifty.

Storywise there isn’t much to go off of yet. Kail, the MC,  takes various jobs, the first being to route a group of bandits. He is a man with white hair who has the ability to speak (see as well?) to the dead. Kail seems morally good, evident by his contrasted companion and guild-mate Yiannis who seems much more on the neutral side. Whereas Kail isn’t fond of dishing out death, Yiannis seems to almost relish in it. This establishes a clear difference between the two straight away.

In the second arc Kail is tasked with finding a young girl within the Ookami forest where he encounters a monster...or rather has a dream? I’m still unsure of this.

All in all, the world of Legacy of Kail is fleshed out well by the writer. But there isn’t enough plot progression yet to give a full analysis of how it is / where it is going. For now, I think it’s pretty good. I hope to see more character development in the future as well as more world building.

Four stars for now only because, although I am interested, there hasn’t been a pivotal plot point that's made me want to glue my eyes to the screen.

This is where most of my concerns lie. I found it a little difficult understanding how much time has passed not only between chapters, but between paragraphs. I think this can be easily fixed with a re-read and an editorial mindset, but it did break my immersion from time to time.

The writer does a good job of describing environments but could use a little more detail when it comes to characters, their reactions, and especially battle sequences. I love me a good battle sequence and I think the writer is nearly there in nailing down what they want.

Four stars. With some work this can easily be bumped up and I will adjust as the story progresses. This seems to me like a story which the writer needs to write first, then fix later. I’m rootin for you

Grammar wise, it’s very good. I haven’t found any glaring problems aside from some things a re-read or two could fix.

No complaints here, excellent grammar and I’m not one to nitpick. Writings hard after all.

Here is where I think a lot of the problems lie.

The main character Kail, although written well, seems to lack the flare or draw that a main character should have. I should be backing Kail and his decisions. I should be enticed and wowed by his dialogue. Right now though I’m just having trouble figuring out who he is exactly. He’s a morally good guy, that I understand, but who is he at the core? Maybe we just haven’t reached a plot point situated around him and his growth as a character yet, but at the moment he’s really nothing more than a standard action/adventure hero with a cool power.

Sure he’s good at fighting, and he seems to know his way around a sword, but who/what is he? Why is Kail such a good fighter? Why is he so knowledgeable about battle? How did he get his power?

More emotion will do him well. Don’t be afraid to show off your main character. Characters are what makes stories great, so make your MC great.

Yiannis seems like a cool character whose morally grey, I like him. His agenda was established quite early on and he seems to be sticking with it. Yiannis at the moment is more likeable and easier for me to align myself with than Kail simply because he’s been spelled out for me via his actions.

The other character are...well just sort of there. A lot of characters have been named dropped, yet I don’t really know who they are aside from what their roles are.

Three and a half stars. Not enough character development going on here for me. They aren’t bad characters by any means, but they just don’t have enough going on for me to feel any sort of emotion towards them.

This can easily be bumped up when and if the other characters are more fleshed out but in order for that to happen it will require:

All around I think Legacy of Kail has a lot going on under the hood. The writer clear has a story they want to tell and a world they want to show us, but the problem lies in a lack of emotion. I don’t feel invested in the characters.

There’s a great foundation laid out here, one that can build a great story.  But at the moment it just seems like it needs some polishing. But don’t let this deter you, I think it’s a great start and I look forward to reading more. But, like I said there needs to be more emotion. Your grammar is good and you’ve got a good concept going here. All you need to do now is make sure the execution is done well.

I really hope this didn’t seem bashful in any way, I am writing this because I’d like to give you my honest opinion on your story. I really want to see this become something great, but that can only be accomplished if you put your heart and soul into these characters. Keep writing, keep pushing forward. You’re beating out everyone is basically throwing up their ideas into a word doc and posting it.

My advice: If you really want this story to be something great then you need to go into it with this sort of mindset. Write the story you’d want to read.

So let me ask you this, if you were to read this right now would you be happy with it? If your answer was no then it’s simple: keep going.

Diamond in the rough.

I'm not a fan of the light novel style of writing the author employs but that is my personal taste so I didn't let it effect the Overall score. The grammar needs some brushing up but it is better than mine in its current state.

The protagonist is far from bland. I look forward to seeing how Kail grows as the plot progresses.

Note to the author: your blurb needs some work. Maybe a hook to attract readers.