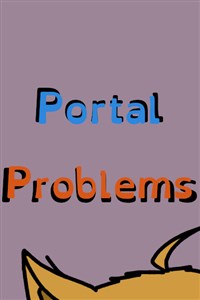 Lucie ended up leading the group, with Jules right at her heels and Sam trailing slightly behind N. The corridor wasn’t exactly empty this time, but nobody seemed to pay them any attention - she opened the door, the four of them got in and she closed it back in its original position, as if it was a shelf leading to a secret passage.

Since Jules and Sam were slowing down to glance around, N found himself as the front of the group, and he descended the stairs to the main room. Mr. Robert seemed to have been taking a nap on a chair he probably had taken from a classroom, but the noise from all of them arriving down awoke him.

“Should’ve expected you’d bring your whole group.” Mr. Robert sighed, his eyes rolling. “Teenagers.” He stretched and stood up, walked towards his machine.

“So… What’s this thing then?” asked Jules, as the professor crawled under a desk to turn on a few multi-sockets.

“Right now, just a pile of scrap metal that doesn’t know the damn difference between floor and ceiling rounding.” The teacher stood back up, barely avoiding hitting his head on the bottom of the desk. “But in a few hours, kids, that thing’s gonna be a portal to other universes.”

No matter how triumphantly Mr. Robert was wagging his finger, it didn’t affect the four students’ reactions. Lucie was in total awe, Jules was processing all the possibilities, Sam was stoic as ever, and N looked totally confused.

“You’re… Joking, right? Like, there’s no way that kind of thing exists…” N muttered in protestation. Lucie was excitedly hopping about, barely holding back a shriek of amazement.

“It sounds like a clear breach of the rules of physics, doesn’t it?” boasted the professor. “But it’s not that the portal breaks the rules, it’s that what we thought were the rules were wrong.” He added with confidence.

“So that means... other universes exist out there? Like, multiverse, slightly different versions of the same universe as us?” Questioned Jules.

“No, it’s not really like that. Turns out the multiverse is less like an identical universe over and over with minor variations, and more like grapes - a bunch of radically different universes floating next to one another, with other grapes even further and out of reach even for my machine.” He paused. “Well, for now, that is.”

“Is it dangerous?” Asked Sam, taking a step forward.

“Don’t worry. I’m not putting anyone in there until I know for sure it’s not gonna break down in the middle of it or something.” Reassured the professor. “Essentially, it’s just a very long range teleporter.”

“Oh! Ooh!! Show us how it works! Please?” Demanded Lucie, a gigantic smile on her face.

“I would, but... not during school hours. Plus, I just said I need to fix something with the code first.“ Said Mr Robert, back to his usual half-absent look on his face. “...You can come back at 6PM, alright?”

Lucie nodded, and Jules did the same after checking his schedule. But N had an objection. “Hold on! Hold on. I only came back because I didn’t get a chance to refuse this morning.” Lucie looked at him, dejected. “I’m sorry, this is just- this is just too abnormal for me. I can’t do this.” He argued, rubbing his face to wash away the fatigue that had been creeping up since the start of the explanations.

Sam put his hand on his shoulder to keep him calm, and Jules joined in quickly enough. “It’s alright, dude. Nobody’s gonna force you if you’re uneasy.” Jules said, before switching to whispering. “I mean, you’re probably not gonna be missing much, what are the chances this thing works anyway, right?” He went back to a normal volume. “It’s fine. I’ll tell you about it tonight, okay?”

“Thanks.” N sighed, and turned to Sam, wanting his opinion.

The tall student took a moment to notice N was waiting for a comment from him. “I have to be there. Just in case something bad goes wrong.” This answer surprised him, but the explanation offered did fit Sam’s character.

“As your friend Jules said, I won’t force you to be here if you don’t want to, Marcus.” stated Mr. Robert. “It’s not like you should be here anyway, but I’ll be damned the day I let the principal decide for me what I can or can’t do.” He muttered to himself.

The bell rang, signaling the end of the lunch break. N sighed in relief and was the first to go for the stairs. He just needed to distance himself from all this and cool off a bit. Jules and Sam followed him quickly enough, but Lucie stayed behind to discuss with the professor a little more.

Eventually lockers were opened, bags were grabbed, the correct books were put in, and the three of them got on their way.