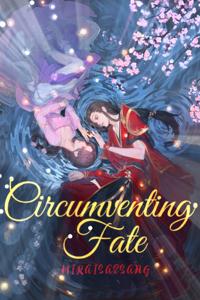 Lei Xing walked to the center of the platform and bowed, and then her sheet was spread open, the empress dowager creased her brows and was visibly taken aback, while the emperor narrowed his eyes as if trying to decipher the work. As they paraded her work, Lei Xing could feel the confused and baffled stares been sent her way. Her embroidery piece was a collection of four round seemingly identical objects, with one big one seemingly in the centre, and the other three small ones flanking it at the sides, two at the top and one on the bottom left. The round objects looked...interesting, the outer lining of the objects was gold rimmed with spaces in between the threading, the inside of them were covered with black small connecting lines in a haphazard manner spread over the space, then on the left side there was another set of red haphazard connecting lines on top of the black lines, while on the right there was another set of blue haphazard connecting lines; diving up the inside into three seemingly three compartments, save for the black lines encroaching into the territory of the other two. The three smaller objects were smaller versions of the big one, and were connected to the big centre object with silver lines.

When Lei Xing finished, she waited for feedback with her head slightly bowed. After waiting for a while, there was still no response, her eyes darted around a bit nervous.

She bowed and was about to turn to step down.

"Isn't this just attaching extravagant words to a bunch of meaningless lines?" Said a calm voice

Lei Xing stopped and looked towards the left.

The voice came from the refined scholar Lei Xing had encountered the day before. He seated right below the Emperor's platform, holding a wine cup and was looking at Lei Xing with an eyebrow raised and a slight smirk.

Lei Xing blinked once when she saw him, but maintained her calm demeanor, faced forward and with an added layer of indifference and flatly said, "Words are what provide the context by which we are supposed to understand and appreciate things, just like how you can tell the rank of a person based on their official clothing, and even more so from their title, you can tell the value of a work by the vision it embodies."

...Is she scolding me for not introducing myself?...

"Your words are very insightful, but what Prince Yi said is not wrong either, a piece of work should have its own intricate value...." The empress dowager finally found her words again.

"...Is this considered your most valuable work?" The empress dowager finished.

"It may not be the most valuable work, but it is my most meaningful work." Lei Xing calmly replied while bowing slightly towards the empress dowager.

Lei Xing finally stepped down and walked to the back of the line and took her place and quietly heaved a sigh of relief. The next lady was called forward and the others followed after, their work were all exquisite, containing mountainous views, deities blessing people, more flowers, more dragons e.t.c In total, there were 23 presentations.

After all of the girls had finished presenting their work, they went forward and bowed towards the front again.

"You have all done well and shown your skills exquisitely... mostly." The empress dowager said.

"Tomorrow will be the Art test"

The candidates all bowed and chorused again, "Thanking the empress dowager empress and the emperor for your grace."

After that, they all got up and followed behind the old palace lady and left the hall, with the maids trailing behind them. They walked for a while until they arrived at the inner palace. Then the old palace lady stopped, faced them and spoke, "This is the inner palace, my name is Ling mama and I will be in charge of all your needs during your stay, the maids who assisted you during the test will also serve as your personal maids for this period. You will be assigned to various courtyards in small groups, you must not wander about and stay within your courtyards. The Imperial palace is a strict place, you must adhere to the rules. If you break the rules, you will be punished accordingly. Some of you here are familiar with each other and it is fine to continue your friendship, but you must also remember not to discuss or disclose your identities with anyone, if anyone is caught doing that, you will be immediately expelled from the palace." She said as she narrowed her eyes and scanned the faces of the candidates.

...she seems to be enjoying this, it's not every time a maid gets to boss around Imperial wives...well, prospective wives...I hope for her sake, no one takes it personal hahahaha...

The palace lady finished her stare down and continued, "All that you require has been provided in your courtyards, should you require anything else tell your maids. That is all, now your maids will lead you to your assigned courtyards."

The maids walked to their candidates and led the way to their courtyards and the crowd dispersed in different directions in groups.

Lei Xing was heading in the same direction with a few of the candidates, as they were walking, one of them walked closer to Lei Xing and quietly said, "Jiejie, how come you ended up doing that instead?"

"En?" Lei Xing looked at the other girl skeptically.

"Ah, of course, you know it's just been such a tiring day." Lei Xing said with a nervous laugh.

Lady Lian sighed and said, "It has...How come you ended up doing that? didn't you say you were going to do a butterfly garden of flowers? Why didn't you tell me you changed it?"

...Wait, isn't that what she did? Oh, so I told you I was going to do that and so you did it...isn't this directly trying to compete with me?...

"Ohh, and that's what you ended up doing?" Lei Xing asked with a raised eyebrow.

Lady Lian blinked and became flustered, "Ah, I really couldn't think of anything so I just..."

"I knew Jiejie would understand." Lady Lian said with a wry smile.

"So what do you plan to draw tomorrow?"

Lei Xing scrutinized her for a while and then said, "I was thinking of drawing the heavenly mountains, with a lake situated in between them, with heavenly immortals dancing above the lake, with mortals swimming beneath, oblivious that they are heavenly territory. With dragons and phoenixes flying in the sky to represent a changing dynasty." The other people around them all glanced at Lei Xing with raised brows.

...I'd like to see you do that...it's either she's a green tea b**ch or just a simple copy cat with no mind of her own...and whichever is annoying...if she really does that, then she's a fool...

Lady Lian's eyes widened as she listened to Lei Xing's words and after a while said, "That sounds difficult..."

"Well, I thought I should do something more impressive." Lei Xing said with a smile.

At this point, there were only four of them left with their maids, Lady Lian, Lady Jin, Lady Yu and Lei Xing. Lei Xing glanced at their group and sighed.

...I guess you can say this is the collection of the top three and the last from this test...LOL is this the universe telling me to be better?...

The defense minister and his son both went home perplexed and pondering over the events of the selection all day during their work. They both knew Lei Xing's embroidery skills are exquisite and among the best, yet she came out with such subpar obscure work, although her words were very profound and very meaningful, no matter how you look at it, it's still way below the standard. The pair of father and son had left the hall and returned home in silence both perplexed.

When they arrived home and where seated for dinner, the rest of the family inquired about Lei Xing's progress.

The defense minister furrowed his brows and asked, "How is Xing Er's embroidery skills?"

"Embroidery? Excellent, she's even much more skilled than I am." Replied Madame Lei, perplexed at the question.

"That's what I thought..." The defense minister said and frowned and stopped moving his chopsticks, "Hmm..."

"Why? What happened?" Madame Lei pressed. Her husband seemed to be deep in thought and was not responding so she turned to her son, "Yong'er, what happened?"

Lei Yong sighed, "Well, I'm not exactly sure...her work was...interesting..." he finished with an uncertain look, he wasn't sure how to describe it.

"Interesting? What do you mean by that? What did she do?" Madame Lei inquired.

"A circle, a wheel...a weird wheel, a bunch of them...four! four of them...then lines inside the wheels, colored lines...yes, that's it..." Lei Yong haphazardly explained.

"A wheel? Lines? Not a garden?" Madame Lei was taken aback. "She had said she was going to embroider a garden of flowers and she had even been practicing that for so long. Why would she -? "

The family fell into silence and not eating, each with their own thoughts. Madame Lei suddenly perked up, "Xiao Ting, did she say anything to you?"

Xiao Ting had been quiet and had been cold sweating once her father mentioned her sister's embroidery when her mother singled her out, she nervously looked at her and shrunk a bit, "Ah...that..."

The others on the table also looked her way expectantly, Xiao Ting became even more nervous.

"Say it." Lei Yong said while narrowing his eyes at her. Xiao Ting flinched and looked at her parents and saw them seriously waiting for her answer.

"Forgot what?" Her mother pressed.

"Forgot...forgot...how to...embroider..." She said while timidly glancing at her mother.

Madam Lei's eyes widened and her mouth hung open, Lei Yong had on stunned expression, the defense minister raised an eyebrow and solemnly nodded, "Ah, that explains it."

"Why didn't you tell us?!" Madame Lei roared.

Xiao Ting flinched again and quickly explained, "I only found out yesterday...she...jiejie didn't want to en-... worry anyone..."

...I am sure if mention that, jiejie would really kill me...

"It's okay, she was able to sort her way through and didn't put the family to shame. Frankly, given her disadvantage, you could say she did brilliantly." The defense minister said with a smile, trying to comfort his wife.

The father and son pair went on to explain the significance of Lei Xing's work to ensure that the Madame of the house could let go of her worries.

"Xing'er is a great artist and magnificent on the qin, I am sure she can make up whatever loss she this has caused." The defense minister said reassuringly.

The faces of the rest of the family fell and they sighed heavily. Xiao Ting covertly hid her smile.

...Jiejie with this I have made amends, right? Now they won't expect much and you don't have to explain anything when you come back...

Bio: An avid reader of Novels, my most recent genre of obsession is with Chinese novels...and got so into them that I'm translating them now😅😅...Oh and I also started writing my own novel, "Circumventing Fate"🙈...it's an evolutionary process👩‍💻LOL