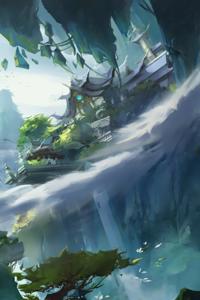 Demon in The Temple

This story is no longer on royal road.

A pretty little read despite quirks in grammar

I noted this on the first chapter, but I like your style of writing! It's detailed without being too drawn out, and it has a nice loveliness/flow about it when reading the action or description scenes. The only drawback is that awkward grammar often messes up your style from being properly/artfully conveyed.

(Warning: some mild spoilers ahead)

The story is still young, and I feel like where it ended on the upoloaded chapters (83 pages), it's starting to pick up in a bigger plot with the demon. So I can't really judge the story all that well at this point. But I do like Yaru so far, and the part about the Kiss of Death was intriguing. Heopfully we'll see more of that importance later. His reaction to Koryn's death was also believeable as well as his reaction to the kiss.

I voted for a romance, and I noticed that indeed author gave us one. I'll just caution on making it progress too quickly. I thought the first meeting was pretty good, but the chapter right after that (iirc) had them jump straight to almost kissing and Nina technically declaring her love for Yaru, or at least protesting against the demon. This is too quick in my opinion to be realistic. HOWEVER, they are young, so they tend to fall in and out of love (or crushes rather) than adults who tend to make love complicated. I personally find that the emotion and struggles of adult relationships to be more my cup of tea. But it's definitely possible to making an engaging young love. Keeping it sweet and shy but bold at times as it's very characteristic of children. And you have the added later advantage of them growing up too. I haven't yet seen a story take advantage of this factor of young, usually innocent love turn into something more complex and possibly even convoluted. Anyway, I'm digressing a bit, but I think you're on the right path generally. Romance can add some spice as long as the rest of the story is the main focus.

I still haven't gotten much of a grasp on the story, but again it's very early. Yaru is mainly gathering his knowledge and strength in order to escape and move onto greater exploits. The cultivation details aren't overwhelming as sometimes such stories with them tend to be. I'd even say I'll like a greater focus on it, but kept as is fine too as long as it's replaced by some sort of other action. Just keep all the events rolling.

I wish I had more to say about this story, but from the little I've read so far, this is what I picked up and wanted to comment on. I like what I see so far, and the pacing is pretty good too. I'm curious to how you'll continue since that last chapter was quite the cliff hanger. As long as you keep including that human emotion like in Koryn and Yaru's final scene, then I think you've got a good thing going! I had to assess based on what I've seen so far, but I imagine with more content, the score would've been higher. I'm willing to adjust it later once the story gets rolling, so don't think too much on the numbers. The potential is there, so keep at it~! (:

The story begins with a nameless opening, leaving the exact events unclear and interesting until they are later visited. Sadly, the story then goes on with entire chapters of pure exposition. Not only does the backstory they tell feel empty and meaningless, but also is it unnecessary to understand the plot, so it feels like a long pause before the story moves on to the backstory of the protagonist, which is much less boring, but told in a long-winded passage about the same few character traits (It is made absolutely clear how good the protagonist is at sneaking and why, many many times).
Finally some action happens, and it too is long-winded, trying to impress the reader with grand words written into simple and vulgar sentence structure.

The author's skills in the English language are mostly sufficient to get a story across, but not enough to skillfully tell it. Where the author makes mistakes it is easy to guess what they meant, but the simple and sometimes wrong sentence structure takes the reader out of the action too many times.
With some better skills in english grammar and writing styles, the author could write an intruiging story about a well put-up character, but so far, it seems the author is more convinced of the character's greatness than capable of expressing. A promising premise buried under problems.

It is really good. I like how you leave the boy nameless adding to the feeling of it being personal to the reader.