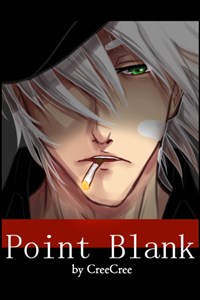 Legend of the Guild: Point Blank

Status: On hiatus indefinitely, because I'm going to be busy and the story is now at a place where it needs major reconstruction.

Curt is a young gunslinger from a small town called Ore Town, situated in a barren wasteland known as the Dusts. While sabotaging the gang threatening his town, Curt is forced to take a leap of faith, literally. He plunges into the sea of clouds expecting death, only to arrive in an entirely new world beneath his own.

Saved by a young girl using magic, Curt isn't too sure what to make of his second chance of life. When he meets a fellow Duster who had fallen years ago, he's roped into becoming second-in-command of a brand new guild.

Guild duties aren't easy, especially as Curt is tasked to recruit fighters to take on the Grand Guild Tournament, where the winning guild takes home an enormous prize pool -- and most importantly, a mysterious ticket to the fabled "Star City" that exists above the clouds. Going with the flow only takes him so far, and Curt soon finds himself burdened with more responsibility than he bargained for, including the fate of the two worlds.

This webnovel is written for fun, and everything posted is essentially a first draft. Beware of typos and lack of creative descriptions — my main priority is to get the story out over writing quality. Still, I hope you enjoy the story.

I took inspiration from the lore of the MMO, Dungeon Fighter Online (Dungeon & Fighter), and there may be easter eggs or references to the game, but the story and characters have become wholly original and standalone.

[Note: Profanity tag is up because profanity is present, but infrequent]