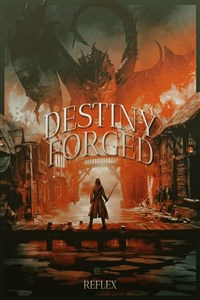 Despite possessing unrivaled combat prowess and unparalleled instincts, he had always lived a restricted life, hidden away from the rest of the world.

However, with the appearance of the VRMMORPG, Destiny Forged, he can finally show his existence to the world and rise above the elites and experts.

Follow our protagonist as he grabs ahold of his own destiny and battle against fate.

Style: The writing is good. Nice imagery and turn of phrasing although a little cliche-like at times in describing grandiose things. The formatting of the game elements is pretty good in terms of organization and understanding without using tables. However these game elements sometimes overwhelmed chapters where it felt like there was less story than numbers and system announcements. Lastly, please decrease font size. Especially on mobile, I feel like I’m reading kiddie font it’s so large.

Story: Generic. But well written tropes all the way. Lots of battling which was done pretty well, but then gets repetitive where the interesting parts quickly become everything outside of fighting mobs. The MC is another let’s become the best/path to number one in this game. Ok. Typical plotline that needs more sprucing up with more focused elements or side goals, all of which should be connected to something deeper. The world building of the game and game elements themselves  are great—easy to follow, detailed, numbers look accurate. Nothing original, but presented very nicely anyway.

Characters: You like OP characters? Well if this isn’t the definition of OP Gary Stu then I don’t know what is. His background is literally gifted since birth without an outlet to show his amazing mental and physical skills. He’s also a nice person who’s ‘pleasantly’ arrogant, also known as confidence. Sounds nice right? Nope, this is shallow, very shallow. There are a few attempts at deeper thoughts like why am I doing this? But it doesn’t really get answered nor do we really see the MC Jaden do anything more than fight and progress through the game by acing everything he does as well as have way above average starting stats and starter pack/other perks.

Overall: The epitome of completely unoriginal by using all tropes in game lit but managing to write them all out very well! You’ll recognize elements from this story from many big names of other stories of anything game-like. Yes, it’s a pleasant read. But is pleasant worth it when it critically lacks something deeper, substantial, and original? Up to you, it can go both ways. Maybe read it for fun, but gaining anything thought provoking? Nope not here. It’s too bad though because I suspect some restructuring of the backstory and characters could greatly amend the glaring unoriginality.

Story might be used by a lot of writers. But I did get into it. Would like to see more done with the story.

thanks for this googd story.

and dying to know what happens next