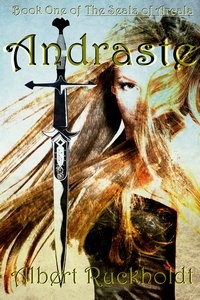 
She was standing in the middle of what I could only describe as the burning remains of a village.

Nonetheless, she caught my eye as she stood gazing about her.

She was silent now, but I’d heard her cries grow hoarse the longer she yelled.

I presume she called out the names of those dear to her.

However, there were no replies.

Certainly, the corpses lying about en masse could offer her none.

For a few minutes more, I watched her as she wandered about.

I watched her fall to her knees and despair as she clutched at a pendant that hung around her neck. Once again, I presumed it was from someone dear to her.

She knelt and wept, and I chose to wait.

As I waited, I studied the ruins around me.

Recently, the village might have been home to four hundred souls or more.

As I sensed the surroundings, I counted a quarter as many dead bodies.

The others had either fled, or been taken prisoner, perhaps to be sold at the markets across the border, though it was doubtful since Caldera lay to the south, and it wasn’t a land that condoned slavery or the trading of people as one might trade livestock.

Perhaps her loved one, the giver of that pendant, was amongst those fortunate enough to be alive.

I turned my attention upon the girl.

How had she escaped? Had she been outside the village when it happened? That was dangerous considering it was evening and the creatures of the night were lurking about. Soon they would venture into the ruins and scavenge the corpses for food.

I sighed softly, and then walked over to the girl.

My footfalls were lost upon her.

She would not sense me until I stood almost on top of her.

The Ether that was her ally would be of little help to her against me.

In truth, once I was done with her, the Ether would be forever out of her reach.

In that respect, she would be just like me, forsaken by the Ether.

She looked up, noticing me for the first time.

I saw then that she was rather pretty.

No, perhaps in the eyes of humans she would be considered quite beautiful.

If only she were dressed in the fineries enjoyed by a lady of noble upbringing.

Yet, despite the dirt, sweat and tears on her, and the ragged state of her clothes, I could not deny her beauty.

She looked at me, and I saw fear spread across her face.

I reached down and placed my hand upon her forehead. She grew very still as I forced my Awareness upon her, instilling a calm within her.

My senses flowed over her, and through her, and I found that she was worthy.

As I had suspected when I first laid on eyes on her, she had the traits that so few possessed.

They were traits that would elevate her standing within the kingdoms and empires of humanity spread out across this one world out of many.

She would make a fine addition to the ranks.

Hence, I made my decision to offer her a choice.

“I offer you the opportunity to begin anew. Will you take it?”

Her eyes looked a touch addled, so I withdrew my Awareness to the edge of her consciousness, yet kept a grip on her fear.

I needed her thinking clearly, without her fear influencing her decision.

“Yes. The opportunity to make a difference, and perhaps to one day see justice served.”

I nodded. “Justice, and not revenge.”

She was quiet for a long while, but I could feel her thinking my words over.

I smiled down at her. “Very good.” I gave her a sympathetic look. “This will hurt…a great deal.”

My right hand morphed into that of a blade, and I plunged it into her chest.

I felt the life begin to ebb out of her.

No human could survive such a wound.

While life yet remained in her body, I removed the blade that was my hand, quickly restoring it to its fingered form.

She remained kneeling with a questioning look in her eyes.

Why had I stabbed her? Had I not offered her the chance to begin anew?

I reached into what passed for my coat and withdrew the Archetype. Wrapped up like a tiny fetus, its blue body resembled a gelatinous, amorphous substance.

I held it close to the gaping gash in her chest. Sensing her weakened life force, it moved of its own volition and pored itself into her through the wound.

Near death, her body would offer the Archetype little resistance.

At first there was no reaction.

Seconds went by, and fresh blood continued to pump out of her chest.

Then I saw her body jerk upright while she was kneeling.

I saw her arms twist back and her joints creak as her mouth opened impossibly wide.

And then I heard her scream.

Some might call it a scream of abject pain or unadulterated anguish.

To my ears, it was the cry of a life reborn.