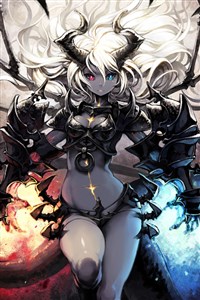 Arslan, an eccentric transmutation alchemist, was quite well known throughout WinterWell for doing strange experiments. The Guild of Alchemists rejected his research results and his funding suspended. Now it's up to him to continue by any means necessary.

However, that may prove difficult, considering that a rogue alchemist organization has taken an interest in his work.

This is a bold one!

This was once a glance review that turned itself into an actual review!

Before I begin this review, I want to state how this is not my normal type of book to read, and yet I'm enjoying it so much. I started to read it and literally couldn't stop after that. So please, for the love of all that is holy, don't drop this Mimic. Otherwise, I'll drop you. This is written at Chapter 12 or XII.

Minor spoilers up ahead.

Style:
I have no issues with the style because it compliments the story quite well. In fact, the style suits the fast paced story amazingly and actually makes it even more enjoyable. Everything is easy to read and while some chapters it may falter and become a bit harder, I have no major grievances. In the end, the style makes everything all that bit more enjoyable.

Grammar:
Here's where my largest issue is with the story. The author has definitely tried to use different pieces of punctuation, techinques and things like that, and often succeeds. However, it's when they're used incorrectly that it can immediately bring you out of the immersion. For example (a rather bad one), there are repeated moments where colons are followed with a letter that shouldn't be capitalised. Doesn't really detract from the flow, but it's there.

What I'm talking about is when words are missing, and then the whole sentence is practically ruined. It leaves me having to reread it a few times to understand what I missed, which ruins the effect. Obviously, they're few and rare, but the occasional moments (especially in the earlier chapters) can lead to ruining the mood.

Basically, if you're reading this and you're about to start the story, don't let the occasional grammar mistake put you off. Seriously, the later chapters are definitely worth the minor immersion breaking.

Story:
The story is imaginative. You've got your alchemist who's on the wrong side of the council, you've got their plans and you've got the potential. All in all, the basics for having a good story. Then, you chuck in Mimic's creativity, and you've got something that keeps you entranced.

I'm not an expert in this genre, and I used to think it was rather niche, so I've been proven wrong. But, I can say with certainty for me, I've never seen a story like this before. Everything seems planned, there seems to be some serious foreshadowing for the future and it all comes together brilliantly.

Hopefully, you'll be like me and you won't be able to stop reading once you get into the story.

Characters:
This is easily my most favourite part of the story. Arslan is lovable, he genuinely seems human, he's enjoyable, pitiful, funny, relatable, calculating and most importantly, he actually seems intelligent. It's not just a case of it being said that he's intelligent, it is vehemently proved time and time again. That's something that I always find lacking in stories, when it isn't actually proven. More specifically, this is always proven in the fight scenes that happen. So, this is only a positive for Mimic.

Next is Mandilyn, a side/main character that you can't help but adore either. They feel fleshed out, there is real motives and they do actions that seem genuinely human. In the end, it seems like Mimic has a great hold on what makes a fantastic character, and is definitely putting that to good use.

The alchemy side of the story comes up often enough that it doesn't feel overused, nor underused. It's explained and described in a very good way that's beyond simple to use. I'll hand it to Mimic, they've definitely used it one of the best ways I've seen yet.

In the end, I find this story to be fantastic. There's comedy, there's action and it's paced in a way that I normally wouldn't find that interesting. Yet, with most of the book, Mimic has proven me wrong. This story is wholly unique to me and a thing that I hope I can experience again. I do not know why, but whenever I read it, I get a warm feeling of nostalgia and comfort, which only makes the experience better.

For your sake, I wholeheartedly urge you try Monster Girl Fusion because you will literally not regret it.

SIMPLE YET VIVID, AS ALWAYS

Like Mimic's previous books, his simple yet vivid storytelling is amazing. He doesn't need flowery and colorful words to describe things, all he mentions are the important details and such. This make for the best possible pacing for me.

Of course there's not much to judge on right now. Still, the initial concept is looking interesting, plus the main characters feel human at the very least. Reading the point of view of an... eccentric alchemist sounds definitely interesting. I look forward on where this story will go.

This Queen gives you her blessing, Mimic. Good luck and have fun writing~.

Enjoyed the story and writing style

Story was simple but couldn't stop reading once I started

That sounds really condescending doesn’t it, welp. Wasn’t supposed to be like that. Just couldn’t really put my thoughts into words.

oh and, Author-chan, please, don’t drop this story, thanks.

that all take the 2.5 start for you and your 11 chapter idk i eat too much food why watching something