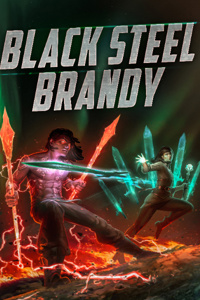 One thousand years have passed since Ragnarök. New lands have been brought to Midgard with to the collapse of Yggdrasil, and new magic has been discovered by the survivors. The old gods are dead and have been replaced by those left standing after the last war.

Brand was born Jabari, a dark-skinned human that is seen to be monstrous or mysterious in the city in which he lives. For his entire life, he's had to fight off attackers and deal with mistreatment. Worse, within two years he will be forced from the comforts of his home to fend for himself on the streets of Vellia. Before he is forced to go, Brand intends on gaining as much wealth and power as possible in hopes of having the kind of freedom only the powerful ever known.

Little does he know, an opportunity to learn magic at a school for nobility is nearby. He just has to survive long enough to reach it.

As of chapter 26 I have enjoyed this quite a lot.

A editor or more care when writing is however strongly advised. You should at least copy paste the first few chapters to grammarly. Bad grammar in the first chapters can be quite to turnoff to new readers.

i think the author has improved his writing in recent chapters quite a lot. Recent plottwist came really unexpected so good job there.

Will update rating from 4 to 5 Stars. Definitely worth reading. And the Story just started :D

An awesome story that should be able to draw you in and partially succeeded with me. However the constant grammar and formatting mistakes make it hard to understand what the author is trying to say.

Review as of chapter 19.

As the title says, this is an interesting read. Has some issues with grammar and spelling, but nothing an editor could not fix. I am particularly interested in how all the interwoven mythologies will turn out.

So much of the text is fighting that in the end I got very tired of it.  It was just too much (felt like over 80% of the text was fighting).  It got to be so much that I would skip text just to get it over with.

It is unfortunate because the fighting was generally well written, but still one has to also have reasons for fighting and other goals as well...

Other than that, later on in the story I felt like there was no one to root for (for dozens of chapters).  The MC and most other characters are under mind-control contract to protect / follow orders from corrupt nobles, and also choose to fight for friends who are willingly rotten pawns of said corrupt nobles.  I just couldn't care less who killed who, or even was rooting for the MC and his friends to lose their fights, seeing how they were on the side of the abusers.

At least the MC and his friends are actively trying to free themselves from their mind-control, but I think the author is taking way too long to move this forward.  Reading hundreds of pages of abuse, forced submission to abuse, and of being forced to murder hundreds of seemingly good people in endlessly detailed narrative of fights got to be revolting.

All this makes it very hard to continue reading the story...

read it in a day

Love this story, needs a little editing early on but is absolutely great later on. In my opinion it is one of the few books that handles op characters properly, it has great worldbuilding and absolutely fascinating enemies. The dialogue is absolutely fantastic and I am left wishing for more, I would even pay for more.

I just hope this story gets the recognition it deserves and Oh lord great author please continue gracing us with your presence. (overly dramatic I know)

Pure gold, liquid gold is all I can say.

This story starts with a scene that appears improbable and confusing: an orphan is sneaking out against his caretaker's will to engage in criminal activities. It is just enough confusion that you read a little more if only to be disappointed.

But you won't. In a feat of storytelling so slick, by the end of the chapter, the author has you completely convinced that this is normal and logical. And in a few chapters, has you believing five more fantastical things for breakfast.

This my friends is a trip down the rabbit hole in the style of the best fantasy writers ever.

The world building is well done. I like the characters and their development. The story is one of the most used tropes, orphan that becomes strong by magic and/or cultivation depending on what type of fantasy story it is. But it is done really well and the author have made it his own in an enough unique way to make it interesting. This story blends together eastern and western fantasy, cultures, gods and beasts from earth mythology as well. Add to that a few plot twists and turns and you have an excellent story in the making.

Although the story is well written, as it flows and is well done. At the same time the author makes a few mistakes in every chapter using the wrong words or place the commas wrong. It's a bit odd as it's otherwise so well written, but the mistakes come rarely enough that you get what the right word should be by context and doesn't take away from the story. Someone else pointed out that the author needs an editor, and while I agree that small mistakes always should be fixed, the grammar and flow of the story is already amongst the top in this site.

I'm looking forward to how the MC and the story as a whole will develop. Thanks to the author for sharing the story with us. :)

I enjoy most of the characters and the story as a whole, but the bad grammar brings down the story a whole notch. There are parts where words are either completely missing or are replaced with something that completely changes the meaning of the sentence. It's insane and ruins the immersion.

The bad grammar seems to be either getting worse, or just more noticeable as I read on.

During the mage school arc, the MC says some misogynistic stuff, and he starts acting kind of rapey for some reason. (i.e. "blah blah, what's your ability?" "The ability to control the milk of women joke joke har har" and also saying his friend's sister is hot and saying how he can't wait to see what assets she grows into. Pretty creepy stuff, imo.)

Beginning of Act 2 has a huge location and time skip and the MC's personality is less of how it was, and more arrogant and pissy: getting in fights with his commanding officer and acting like he can kill somebody that's described as possibly the most powerful beastkin.

Edit at chap 50: the grammar has, indeed, gotten worse, and some sentences make literally no sense and it takes a few seconds to figure out what the author was trying to say. This story might be one of the best on this entire site if the grammar wasn't so awful.

Edit at chap 51: The grammar got somehow worse. There's a distinct lack of suffixes and there are many words that don't make any sense.

Edit at chap 54: there's a joke that I'm.. pretty sure.. is taken from Rick and Morty season 3 episode 10. (If you know anything about this episode, it should be clear what joke I'm talking about.)

Great concept, and I enjoy the characters and their growth.  Could use some grammar and spelling edits, which is the main reason for 3 stars instead of 4 or more.  Easily a 5 star story if cleaned up and perhaps some better indicators of passing time are used? I got lost a couple times, I still am not sure how long its been from events in chapter 1 to current chapter 76

DEFINETILY WORTH A READ

The story has its ups and downs but absolutely better than most of the trash you see in trending section. The story started slow and gained pace. Some characters have decent and realistic personality. Of course there are aspects are I didn't like but I still waiting for a new chapter once in a while. I recommend this story for people who likes action more than plot. I am a grumpy person so I focus negative aspects more than positive ones. So don't let my grumblings influence you. The story is probably better then I portrayed it to be. And finally...

All of the mc's close friends are some kind of genius. I really don't like this kind of cliches in the stories that I read. Mc's major power-up came abruptly. The story's pace could've slower. And all the enemies are some kind of assholes because of author wanted them to be. I personally like diversities in the story, bad guys can have some good or redeeming qualities too.