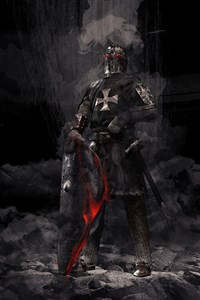 A simple one chapter short story of an elite soldier in battle. However, certain unexpected shenanigans will ensue.

p.s
Credit to my friend M.S for the idea of one of the characters, you know who you are (;

Reviewed at: The Beginning and the End

The prose here is fairly sound, though there are several instances of weird word use. Things like:

"The besieging army had been sent and lead by King Henry of England."

Firstly, 'led', not 'lead'; one's the metal, the other is the past-tense of lead, the verb. Secondly, it's conceptually difficult to lead something you send, since things sent are moving away from you. This should be more like 'brought' or something. Strangeness like this happens throughout.

Also, numbers under three digits (zeros don't count) should be written as words, not numerals.

All in all, though, the story is entirely readable. It's not perfect, but it's good enough.

As for the story-ness of the story... eh.

There's not really a whole lot here. I mean, it's technically a story in that there are a series of events that happen, but I don't find myself invested in much of anything that goes on, and, because of that, I have no emotional response to what happens. The encounter with the temporal pizzaman is curious, but not actually funny or important to what transpires; it's just a sorta 'that's odd' aside.

I... Urgh. I try to avoid this, but I'm going to have to give what I consider some of the nastiest criticism possible: this story is boring.

It is possible I'm simply outside the intended audience. Maybe if I sympathized with Rivian's motivations more, or felt I could identify with him as a person, I'd have a different reaction. But... I have no experience being a knight, and his motivations seem to mostly consist of 'do whatever Henry tells him'.

Yeesh, that feels harsh. Sorry, author, I don't want to be discouraging, but that's really how I feel about this. Your prose isn't bad, the story doesn't have any major plot holes, and there might even be some basic three-act structure here. It's just... not interesting to me.