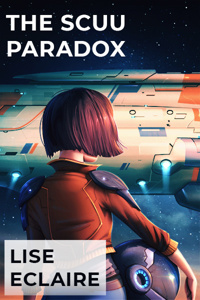 [This is a review for both the first entry and the sequel.]

I’ve read the whole story twice, and I’m still not sure I like it. It isn’t average – that would imply mediocrity. It does some things very well. Others rather badly.

The main character makes the entire journey a joy. She’s curious, smart, outwardly serene but with the soul of a rebel. She straddles the line of human but doesn’t quite step over it, and watching her interact with others who don’t quite know how to deal with that is fun.

If you like mystery? There is a great deal of it, and unveiled masterfully. Hints are given out in bite-sized pieces, and just when you think you know what’s going on you find out you don’t. I really DO want to know what this is all about.

And the world building. Oh boy. It has alien races that feel alien, a pragmatic and rather horrifying vision of humanity, secret organizations, conspiracies, everything. It’s superb.

But there are problems.

For one, about 90% of characters are completely unlikeable. Most spend the story treating the main character like garbage, including much of her family. Outside of her mentee (another ship), her old captain (probably dead), and a few select characters, I’m actually rooting for the aliens to vaporize them all.

And the biggest problem is that the things the main character goes through ultimately end up being relatively meaningless.

You finally find out the villain behind the curtain whose been pulling the strings. Now we’re going to stop the villain right?

Uh, no, actually. They’re fine right where they are. We’ll just… move on to the next mystery.

Beautiful, delicious appetizers with great flavor, but at that end of the nigh you’re still hungry and end up picking up McDonalds. The author has shown us a world filled with injustice and moral bankruptcy, but none of that has been changed through the main character’s actions and doesn’t look like it will.

I’m sure some people could find a lot to enjoy in this story. But I’m not sure I’ll be back for a third try.

The originals only flaw was it barely scratched the surface of the universe and lacked the high stakes of a thriller, resulting in the plot (though well structured) feeling like it had little weight or impact behind it.

I'm pleasantly optimistic about the direction the author is taking with this sequel. It looks as if he's taken to heart the constructive critique and is diving into the heart of the action.

A more satisfying narative backed by the existing solid and intelligent writing style, I'm hopeful that this story will grow into a stronger novel than its already good prequel.

If intregue, action and contemplating the definition of what is privacy is your thing, this story is for you.

As a direct sequel to Lise Eclaire's other brilliant work, I'll urge you to read that before starting in on The Scuu Paradox. This story is just beginning to delve into Elcy's new adventures, but be sure to bookmark the page for later reading or follow along with her weekly posts, you won't regret doing so.

Book Two: Better than ever before

This is book two of a series, the first book being 'Quod Olim Erat'.

Elcy is just as entertaining as ever, and this time the plot is faster-paced. Intrigue and distrust have thickened in the air since the previous novel, and action is picking up with some classic and enjoyable space-grunt combat. It's a good sign when it looks like the auhor has listened to earlier criticism, and it's even better when their writing is better for it. I've got high hopes for this fiction, and it's looking like it'll surpass its progenitor easily.

Reviewed at: 30. Kill the Fracture

A hidden jewel. I am speechless as to why It doesn't have more reviews and more recognition. The characters are incredibly well written. The dialogue is wonderful. The plot is well thought. Just give it a shot.

The main carekter has now sway in the storys prgresion and is dragd along it. It fels like you cold swich aut the main carekter tottaly and the stoyr woldent change. It feals like evrything bult arund the mc.

Ther is no cler end or gole wher the story is progresing to. she is treated like schit in evry chapter and dos not rebels or qestions it.

I enjoyed the story, characters kept my interest and the scifi science bits did the job. That's really the whole basis of me enjoying it. Side note, if you liked this one, first go read the third one, second go read the Ancillary series because I read that recently and it has similar vibes.