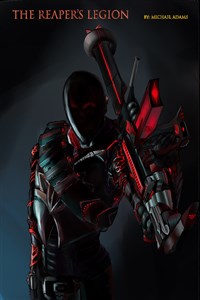 Earth: An advanced inhabitable world in the ideal colonizable range. Moderate temperatures and consistent weather patterns make this planet an incredible resource, along with a wealth of animals and wildlife beyond most worlds. Inhabited by the sentient species designated “Humans,” Earth would likely have joined the galactic community of its own accord. Levels of technology in local populace indicate a sharp trend towards interstellar travel, but still needs to make the last push to acquire reasonable interstellar technologies. Up until quite recently, Earth has not been a fully classified planet and was largely unknown. Due to biotic activity in the quadrant, however, attention has been drawn to Earth and many other possibly habitable planets in the regions, primarily for quarantine and control tactics.

Matthew Todd was not a particularly unique human being before the meteors struck the earth. Average athletics, above average intelligence, but somewhat gifted in marksmanship, the post-apocalyptic earth has been a trial by fire for him and many others. Creatures that resemble bastardized wolves roam the land in packs numbering in the thousands. With entire cities decimated, those that remain are left with the harsh reality that they may be witnessing the end of humanity.

And yet, there is a chance. Humanity knows they are not alone in the universe - the wolves are case enough for that - but what they do not know is that they are not alone in their plight. They are not without aid. Obelisks descend from the sky, giving the people a means to fight back. With tools ranging from guns to advanced mechanical apparatus and more bizarre tools, the people must cull the Biotics. Or, be consumed by the ever growing and mutating threat.

Join Matthew in the fight to exterminate the Biotic threat, and to ensure the survival of human kind!

A very solid story with a leadership-based MC.

This story scratches a few issues that I sometimes have in some fairly appealing ways. And has quite a few (good) similarities to Scorched Earth.

- The MC is OP but only in relation to the rest of humanity, just strong enough to have an edge over most but not all of the "big bads".

- Supporting cast is enjoyable and fills their role nicely, also no love interest on the immediate horizon even after 72 chapters which is pretty good in my books.

- MC is aware of his power, influence AND takes responsibility for it in logical ways. super +++ that I love to see in stories, none of this "lone wolf" nonsense when saving humanity.

Sure it falls into some cliches but they're not always a bad thing. I've quite enjoyed how the MC's power level has increased and it's mostly occured after plot events, making it feel much more natural than simply "I HAVE MC PLOT ARMOR! SYSTEM SAVE ME RAWR". Nice to see a MC actually suffer even through his victories.

A fresh approach to a classic idea.

It's worth reading guys, the flow is pretty good and it doesn't take ten years to get meaningful progress, or a thousand chapters. The characters are all distinct and have feeling and depth. Give it a go. :-)

This story is overall very good. There are a couple of issues that I feel may detract from the story slightly depending on your view. First is the way some side characters interactions with the world are written.

The way the author has Alex seemingly turns around his view and be all buddy buddy after being wirtten as a rebel faction leader and almost dictator of his faction esque charcter, it makes basically no sense that just because hes saved that he changes his views and becomes almost friends with the mc.

Second is the separate characters pov chapters. The author has stated previously that they are not filler chapters and that they are important to the story. With some of them I agree but I personally don't think that we need a separate chapter for a person's pov every single time they go do something away from the mc. When it's that much it does end up feeling and almost reading like filler.

Last thing I'm going to hit on with this, author if your reading this, please for the love of god look up the difference between a mag and a clip! A drum clip is not possible to have what so ever.

Is good. Caveman not have much to say. He head hurt when he try to think hard about why. So he not. Then head not hurt.

Caveman Like Matthe...Matte... Matt. He like when he make big boom, and like when he go zoom into scary monsters.  He hate when Smith die. Smith good. Why Smith die? Caveman not know, but he not like.

Caveman think Matt should get wife, to make strong childs. Matts blood strong, so Matts childs strong. But Matt alone, so Caveman ask why Matt no get wife? Why Matt alone? Caveman is sad.

APOCALYPSE With a System Attached!

I'm enjoying this story very much! The pacing is fast and goes really well with the flow of the story. The upgrades that come with this type of vending machine system are really fun to read about!

the pace of the story is great and the gear is always a joy to read about be it the description or use of it. love the book

The story started off strong and I am a big fan of the genre. The problem I have is that is sooooo edgy (cringy). Also, the tags don't seem to match what I read. Comedy should really be switched with psychological. A lot of time is spent with the MCs emotions and mind, he is the ultimate brooding edgelord. If the story spent more time on action and plot, instead of having chapters dedicated to psychological struggle and conversation between characters it would be a lot better IMHO.

This story takes a weird medium and doesn't satisfy. Fans of "crunchier" stories with meaningful numbers will be disappointed in the shallow system. Fans of plot-driven stories will be offended by the endless cliches. I wanted to like it more than I did.

The story is great and the flow is really good. I love the concepts and the characters. I'm slightly annoyed by some more recent things such as Matt not really talking with his team, and how he seems to have been stagnating a bit. I mean, the legion as a whole has grown but as far as I know, he has had no new suit from the monolith besides his advanced suit and tinkering with it. He doesn't even tell us about cost and supply of matter energy anymore which is a bit understandable. Honest opinion without my bickering complaints is that the story is a must read and it is tied with my favorite novel legendary mechanic and I would recommend anyone who enjoys one of them to read the other.  The grammar score was only lowered due to typos and occasional my misplaced words. Otherwise an amazing novel and I am looking forwards to its future.

This was what I needed, I have been craving a good post-apocalypse story for a while now and this definitely fulfilled that craving.

Ill finish the story and then ill leave a more indebt review.
So far though..... very good.