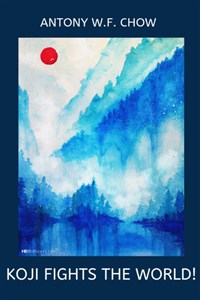 KOJI FIGHTS THE WORLD! (The Bonder Legacy Book One)

[March 16, 2019 Update: Book One of the series is completed.  Please note that the official version is on pre-order at Amazon, with a publication date of March 22nd.  Book One will also be released on Kindle Unlimited.  Consequently, the chapters of this book will remain on Royal Road until March 20th.  Thank you for your support!

A practitioner of Dim-Mak, the infamous "Death Touch" martial art, enters another world and leaves a trail of blood in his path!

When 19-year-old college student and Dim-Mak practitioner, Koji Adalwin Becker, is suddenly pulled through a vortex and into an arena, he fights in a 1-on-15 deathmatch. Upon surviving and displaying his incredible fighting skills, Koji is forcibly married to Zelea Sagoisa, the Fourth Princess of the Kingdom of Nephosia, and he becomes her husband and Bonder.

Koji's status as a martial arts prodigy earns the favor of Daethix Colarte Nephosia, the Third Princess and next Queen of the kingdom; eventually, she declares him to be her fiance and future husband! Thus, begins the legend of Koji in the world of the Four Winds.

Over time, Koji learns more about the northern kingdom and the Bonder Legacy. His elevation to the status of Royal Consort and a member of the Royal Family of Nephosia creates new opportunities and new challenges. To defend his loved ones, his new family, his people, and his kingdom, Koji must fight the world!

KOJI FIGHTS THE WORLD! is a Gamelit Harem Wuxia webserial with isekai elements and geared toward mature readers. It is inspired by Summoned Slaughterer Japanese light novel by Ido Masayoshi, Monster Musume anime show, The Legend of Bruce Lee TV series, and Man of Tai Chi movie. This work contains graphic scenes of martial arts violence, explicit sex, forced marriage, a harem, cursing, and other material that some readers may find objectionable. Reader discretion is advised.

Ive read up until ch 13, and Im sorry but I simply cant read this story anymore.

So we have this guy, a "combat genius" I guess, with incredible stubborness and willpower. He gets basically kidnapped and forced to fight in a deathmatch.

So far Im down with it, he displays ruthless behavior, but is still honorable.

But all of the sudden he gets focibly married, raped and basically turned in to a glorified slave. What is his reaction? None, he just accepts it. With his a new wife of a day or two he gets all lovey-dovey and looks away embassared whenever they talk....what the f

Soon he meets his new father and mother-in law, and he acts like a subservient beta-cuck. Another princess apparently wants to marry him now, the same princess which he maybe not hates, but atleast dislikes. His reaction? Again, nothing, he just accepts it even after he is put to some bullshit test by to queen to see if he is "worthy". What the f.

In chapter 12 he finally gets a small piece of backbone and says that he isnt their servant, but its soon forgotten by the next chapter where he quickly forgives his "wife" for turning him into a slave. His reasoning?

"if he ran out of the arena, he would turn into a wanted fugitive. As a newcomer to the world of the Four Winds, his likelihood of survival was slim."

Really? Wasnt it established pretty early that he had like 10.000 qi or whatever that equated to an "expert". Where the hell is his backbone, determination and stubborness that we were led to believe he had? I dont know if I were you, but if I were turned into a slave, I would atleast be angry or pissed off to say the least.

And it doesnt seem to get better if you follow the summary, where he has to fight "the whole world" for his new "family".

This story could have been good if the characters werent so unrealistic. The grammar is good, the story itself might be good since we havent gotten to worldbuilding and stuff yet. While the style is a bit different its not bad. But it all goes down with the MC who is worse than a JP beta-male in regards to women, well atleast he gets laid.

I am enjoying the story

More.  I really enjoy this story and am surprised there are not moe comments.  Please continue