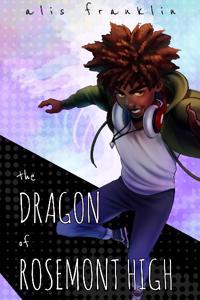 The Dragon of Rosemont High

"What you have just experienced is a Hatching."

When Eli next wakes, he's in bed he doesn't know, in a room he's never seen.

He's also naked. And there's a cat, sitting on the pillow next to his head.

The cat is not pleased when Eli bolts upright in a sudden rush of panic. Things come back to him in flashes; his flight through the woods, his transformation, his fight with the peryton. Widow Adeline.

Eli has never been inside Widow Adeline's house, but the decor around him certainly screams "elderly woman." The bed he's in has four huge, carved wooden posts, and the duvet is both overly plump and makes a slightly crunchy plastic sound when he moves. The room looks like a guest room, with heavy velvet drapes and shelves of leather-bound books and odd curios. The only light comes from an ornate brass fitting on the wall; the sort with cherubs that looks like it was retrofitted from gas to electricity.

The sheets, Eli notes, are covered in blood.

It's not his blood—a quick once-over reveals no injuries worse than bruises—but he is absolutely covered in it, and the sight makes his lip curl in disgust.

No one else is in the room, just Eli and the cat, so he gets out of the blood-stained bed.

His satchel is sitting on a chair nearby, a little folded card perched on top. The inside of the card is full of the sort of old-timey looping handwriting that Eli has to squint at to decipher. It says:

Don't fuss about the sheets. Take a shower. There's a robe if you need it. I will be downstairs waiting. — Ms. A.

Eli does not need the robe, given he has his gym clothes at the bottom of his backpack. They aren't the most fragrant thing in the world but, on the other hand, they aren't pink and feathered like the robe is.

The note says to take a shower, so Eli does. The bathroom has brass fittings and a real-deal claw-foot bathtub, but the hot water works just fine. He doesn't linger, just in and out fast enough to get most of the blood off. His hair's still filthy but Widow Adeline doesn't have the stuff to clean it (of course). He just hopes the blood doesn't show against the black.

Cleaned of blood and stinking of gym, Eli leaves the bedroom. Widow Adeline's house smells like old lady and cat, and looks like the sort of place a Harry Potter movie would be filmed in. Everything is dark wood paneling and bright Persian rugs, leather-bound books and strange curios and patterned silk drapery that a hundred years ago would've been described with words like "exotic." The lighting is dim and originates from wrought brass wall scones hung beneath carved cornices and beside old oil paintings of bucolic medieval scenes.

There is, Eli notes, a distinct dragon motif to the decorations: tables have scaled claws carved into the feet; winged serpents dangle illuminated orbs from their claws; Chinese long roll their eyes wildly on faded silk tapestries. Eli flexes his fingers, feeling the memory of scale and claw, and hopes the theme is a good omen.

The hallway ends at an enormous, carved staircase that swoops down into a foyer with a black-and-white marble laid out in squares like a giant chessboard. A pair of huge French doors to the left of the staircase are open, the room beyond lit more brightly that the rest of the house. When Eli enters, he finds Widow Adeline, sitting in a high-backed leather chair, a cat on her lap and a delicate cup of espresso in her hands.

"Mister Drake," she says. "Come, sit. Eat. You have questions, I assume." Widow Adeline is still in her robe, though she's taken the time to reapply make-up and wrap her hair in a silk scarf. She looks like a faded movie starlet or an aging princess, all pencil-sharp brows and tight plum lips.

There's a chair across from Widow Adeline, and Eli perches on the edge. A nearby coffee table sports a huge cut crystal bowl of beef jerky. The sight is both completely incongruous and also makes Eli's stomach growl and his nostrils flare with the scent.

Widow Adeline notices. "Eat," she says again. "You will be hungry."

Eli is, ravenously so. He's never been a huge fan of jerky but something about the smell—the meat and spice—has his mouth watering. He's eaten three pieces before he's really thought about it. "What . . .?" he starts, then falters, unsure.

"I will make things simple," Widow Adeline says. "What you have just experienced is a Hatching. It is the awakening of your true self; a rare and portentous event. You, my boy, are the most recent bearer of a legacy that has protected humanity for centuries. One of the chosen who are imbued with great power and, in return, a sacred obligation. The name you will come to know yourself by is xyl'tkkan, the Winged Guardians. The name you may know yourself by now is 'dragon.'"

There's a silence, long and strange and filled only by the occasional meowing of cats and the sound of Eli's chewing. Finally, he says:

This earns him an arched eyebrow. "I would rather have thought the wings and tail gave it away."

"My dear boy," Widow Adeline says, "you are now and ever have you been one of the xyl'tkkan. Your Hatching merely unlocked the potential within you, while your Veil allows you to go unnoticed amongst those you must protect."

Widow Adeline gestures toward him. "This soft skin you now wear."

"The tkkan have many enemies, my dear, and they far outnumber you. You are powerful, but you would do well to hide that power until it is most needed."

Eli considers this. "So there are, like, other dragons? But they hide?"

"The tkkan are, as you would say, an 'endangered species.' They are secretive, even with their own kind. And for good reason."

"Right." This makes sense, sort of. At least, Eli's read comics, so he gets the general idea. "And how do you know all this and why are you telling me?"

Widow Adeline laughs; the deep, husky, half-cough of a lifetime smoker. "My dear," she says, "I have been awaiting your arrival for a very, very long time. As I said, Hatchings are tremendously rare. But they are foretold. Not the specifics, of course—not the who or the strictly when—but the where. These portents are closely guarded by the tkkan and their most trusted allies, and mentors are sent to watch Hatching-sites, to find and guide young wyrmlings into their power."

Eli parses this. "You're here to teach me to be a good dragon because a prophecy said so?"

"I do so love the bald-faced plainness of the young." Said with one slight, ironic smirk. Then: "Yes, my dear."

"There are creatures, like the one you slew earlier."

A nod. "They are the asàkki; beings born of evil magic that prey on humans. It is the sacred charge of the xyl'tkkan to destroy them and their masters."

"The language is Xyl'tha, the Divine Tongue. Your true self will find speaking it as natural as breath."

"Of course, my dear," Widow Adeline says. "The tongues of men, of asur, stay with you in true skin. You are xyl'tkkan, not an animal."

Eli sighs. His head hurts from the fancy words and his jaw hurts from chewing thick chunks of jerky. He finished the bowl a while back and is still ravenously hungry.

"Of course," says Widow Adeline, unflappable and with a hint of sarcasm around the edges. "You should return home, eat and sleep. Tomorrow, you will return, and we will begin training."

But Widow Adeline continues as if he hasn't spoken. "Tell anyone who asks that you have been hired as my gardener."

"No arguments, my dear. You will find yourself increasingly in need of an excuse to account for your time. This way, you have one. You will be remunerated for your service, of course."

"You will find adults rarely question the illusion of entrepreneurial initiative amongst the young." Widow Adeline is smirking in a way that leaves no question the evil old bat enjoys steamrolling across Eli's objections. "Especially when it involves assisting the frail and elderly."

Something tells Eli Widow Adeline and "frail" aren't exactly the best of friends—Eli had to've gotten into the house somehow, after all—but all he does is sigh and admit defeat.

"Of course you will, dear. Seven a.m. sharp tomorrow,"

"And we have much to learn," Widow Adeline says. "Before you can join your little witch friend on your sorcerer hunt."

Eli decides the time for asking stupid questions—ones like how did you know about that?—has passed. Instead, he says, "I killed the peryton." The words still feel strange, unreal.

"You destroyed the body of one," Widow Adeline corrects. "And while the sorcerer who summoned it remains, more will take its place."

Support "The Dragon of Rosemont High"

Bio: I like writing and monsters and writing about monsters.