Hey there, E.O. Tenkey here! First off, welcome to the new readers who discovered Not A Manga via /r/rational this week! Choosing to read this was definitely the rational choice. Second, I have good news, bad news, and a treat: 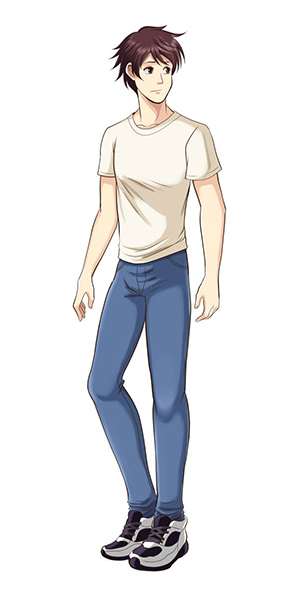 Who's a generic little harem protagonist? That's right, you are!

If you would like early access to or input on the character designs for the harem (plus early access to chapters), I'd love if you'd consider supporting my Patreon. (And that's the last time I'll push that for a while, promise.)

I arrived at the Japanese classroom right as the bell was ringing and ducked into a second-row seat by the door rather than making for the area I usually sat. Seemed my usual territory was pretty well filled up, anyway, and judging by the way she huffed and looked away Samantha was tsundere to the hilt this morning, so no real loss there.

As Shimamoto-sensei kicked off the lesson, I took some time to survey the class from my new vantage point. The bulk of the students were juniors and sophomores, with seniors and freshmen in the minority. The few seniors were no use to me; if I wanted to foster social interactions for Samantha somehow, they were a dead end. Sophomores and juniors were plentiful, but with only three weeks of school most of them were barely acquaintances to either of us. Despite my earlier intentions, I didn't even know all of their names very well. As for the freshmen…

There was Ethan, seated diagonally in front of me. He was kind of an odd one out in the class; very obviously a jock of some sort. I wasn't really sure why as a freshman he was taking Japanese at all, given the limited electives freshmen had at their disposal. He'd looked sick to his stomach when Shimamoto-sensei had described the three different syllabaries on the first day, but I'd seen him pretty gamely doing his best in conversation practice. If I were a stereotypical otaku manga protagonist I would definitely be cursing him out as a damn normie, but honestly he just seemed like a normal guy trying to make the best of a dumb elective choice. In any case, probably the not the best target for friendship with Samantha. I was fairly certain self-absorbed jock-types weren't in her strike zone.

Next up was Silas, a boy who I was honestly a little scared to approach. Aside from the absolutely massive glasses he wore, he was one of those androgynously gorgeous boys that show up so often in "boy's love" manga, or who are mistaken as girls by harem protagonists and then get looped into the harem as a sort of yaoi tease. As far as I was concerned, people could love whoever they wanted, but the way these characters were invariably treated as running jokes—who, in harem plotlines, almost universally were driven by the goal of "becoming manly"—just made me uncomfortable for some reason.

Plus Silas appeared to have a far worse case of social anxiety than Samantha, judging by his hunched posture, refusal to meet people's eyes, and soft-spoken method of answering questions from Shimamoto-sensei. Yeah, the danger of further enlarging my harem was higher than the potential payout, there.

Third was Annabelle, a slight girl who had a blazingly-obvious crush on one of the juniors. Given her half-hearted approach to the class and obvious pursuit of a crush, I was pretty sure she was out.

Last, my gaze drifted to a pair of girls who were sitting directly across from me on the other side of the room. Jewel and Amaya were both freshmen, both girls of color—still the minority here at Alburn High—and both either enthusiastic or at least engaged in the class, so there was the possibility of some common ground with Samantha.

In other words, they were perfect. All I needed was an excuse to get Samantha into their orbit.

My chance came that Friday.

"Okay, minasan!" called Shimamoto-sensei as class started Friday morning. "I'm sure you're getting sick of talking about food, so it's time for something fun. First, please get into groups of four people. Go!"

"I don't really want—" started Samantha, but I cut her off.

I led Samantha to the front left of the classroom where Jewel and Amaya were gazing around expectantly. "You two want to group up with us?"

Jewel looked surprised and wary, but Amaya smiled. "Sure."

"Please take seats near one another when you find your group!" called Shimamoto-sensei over the clamor.

"Great! How about you snag those seats, Samantha, and I'll go get our bags."

Moments later, we were seated with Jewel and Amaya, and Shimamoto-sensei was working to regain control of her own classroom.

"For this exercise, we're going to do a little role-playing. The scenario is that you are a group of young people who are looking for something to do after school in Japan. I'd like each group to come up with their own script for a short interaction with one another; your script should include greeting one another and a short discussion about what you would like to do together. Next week each group will perform their skits in front of the class, and we'll work on our listening comprehension. For today, I'd like you to brainstorm ideas about your scenario, and maybe practice some greetings. Alright, hop to it!"

The four of us stared around at one another with the particular awkwardness of a bunch of relative strangers thrown together by circumstance. I really didn't want to take the lead, but I guess—

"So!" said Amaya, taking charge. "Anyone know what kids in Japan do after school?"

Come on Samantha, you definitely have some ideas to share. I watched her expectantly, but Samantha sat silently. Well, fine; I'm not above forcing the issue.

"How about we debate whether or not we should go see the latest anime movie in theaters?" I said, blithely ignoring the silent fury emanating from Samantha's direction.

Unexpectedly, Jewel spoke up for the first time. "You're taking Japanese and you don't know what anime is?"

That evidently crossed the line for Samantha. "Anime is not cartoons! Cartoons are for kids, but there are anime shows for adults, teenagers, the whole gamut!"

Samantha turned bright red as everyone in the group turned to her, and shut her mouth with an audible snap.

"You watch anime?" said Jewel with audible excitement in her voice, and I knew I'd won.

For the rest of the class I sat back and watched as Amaya bemusedly received a thorough grounding in recent anime series from Samantha and Jewel. Tsundere rehabilitation program step one: complete! Samantha was talking normally with people in her grade about her interests, which was exactly what she said she could never do.

My refusal to let my friends know about my manga habit was looking dumber by the minute, though.