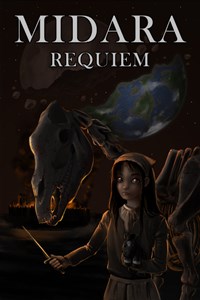 "When the alternative is extinction, all acts, no matter how heinous, are permitted."

The story of a little necromancer who only wants to play with abominations against all that is holy dollies and her horsey, Mister Clackybones.

Welcome to the novelization of one script I designed for a video game setting I call Midara (I selected the name of a genus of moths for symbolism purposes, not to be confused with anything else). Once upon a time, I dreamed of the setting being the next Final Fantasy. Long story short: Nope.

Requiem itself is meant to be an Open-World RPG which adapts to the choices of the player. This is just one of many, many paths that one might follow in Requiem's gameplay, if it ever becomes a game.

Let us start with the magnificence that is the style of writting: as of this point I have been fully engaged, charmed, and cought off gaurd, mind you not by the story but simply throught the writting. It is more then clever, it is intellegent and wittly disigned. Truthfully he (or she but I assume he) has put so much into the intricacies that it is easy to miss intention. An example of this is the trap joke in chapter 7ish, something that is not part of the story or ever mentioned but can be seen by a keen-eyed reader.

Grammer: just one step below publication level, which is to say fucking amazing. There is not much to say about the grammer, which is often a good thing.

Story: not some stunning premise but the world building around it breaths this life into the story that makes it and it's events totally irreversibly believable and real.

Character: remember how I said the world felt real? The characters do to, they are jealous, insecure, cunniving, cruel, self-aware, dumb (in a believible way, I for one have never met people as dumb as are in other books here on royal road), hopeful, depressed, and truthfully alive.

Not all necromancers are evil monsters that wish to flood the lands with their undead armies.

In this story you get a young girl thrown into a hard world where the lines between good and evil are ambiguous at best.

This has a well thought out background and setting where every detail is expressed from geography to politics to even its own social norms.

If I have to nitpick anything then I would only have to say that overall direction of the plot is still to be revealed, but that could just be noted at a hook to keep you reading.

Overall, it’s a great novel with a great author overflowing with potential.

Just a warning: If you want a story about an evil necromancer with an army of undead this story isn't for you.

Our dear MC is creepy enough as is though, so that's a plus in my opinion. The magic system is very well thought-out and has believable drawbacks that make the story interesting.

The world is well constructed and has believable explanations for all its circumstances. Furthermore, there is a rich ancient history that is hinted at multiple times but never unveiled so much that it takes away the mystery.

As far as I can tell the characters are believable, act in accordance with their established personas and changes in said personas are reasonable with life-changing events preceding them.

Grammar is flawless, with the very rare typo in between as far as I can remember.

The protagonist is a little farm girl with a huuuge amount of talent as a necromancer but no evil streak at all. She just wants to play with her 'dollies' but those dollies are the one thing everybody in the whole world agrees is very very bad. Oh, there's also monsters everywhere and a rebellion going on.

Style: The story is told in third-person style from multiple points of view but following the little necromancer. The descriptions are detailed and vivid.

Story: The storyline is just one small path (chosen by the players of a quest on a storyboard somewhere) in a huge setting the author hopes to be made into an open-world video game. The level of detail is incredible with connections everywhere and every action has consequences. The worldbuilding is extensive with a complex magic system, a rich history and complicated social norms (which feel antiquated to the modern readers). That huge amount is also a problem: In a significant part of the story there is a feeling of "I don't understand what is happening here", because many aspects of the lore are not explained (yet).

Characters: Each character has their own complex personality with strengths and flaws. They feel life-like and the quirks are explained by the persons' personal situations and histories. You will NOT find the usual one-dimensional, exaggerated and just plain stupid acting characters in this story.

In total, this story is one of the most well-crafted I found on RRL and you should definitely read it. Also, I you are (or know) the boss of a video game company, you have to make this project happen.

This is a great story! At least I and many other people think so. The style is easy and fun to read, the grammatical errors are nonexistent and the story progresses very naturally even though it's being reader interactive on another RPG site.

Fun Cinnamonbun of a Necromancer

A pretty fun story overall- its pretty rare to have a non-Evil-antagonist Necromancer.

The biggest ding against it is right in the author's synopsis: its a story from a game idea and it shows. There are times (mostly near the beginning) where the story feels like its jumping to plot points like a game, rather than flowing like a book. Its not so bad as to make it unreadable, but its noticable.

Also, after about 40 chapters, I'm still a bit opaque as to magic traits/elements. There is terminology thrown around, but things like 'aspects' or 'talents' seem to be used interchangably or not elaborated on as to their differences.

The stuff of creativity.

Reviewed at: Chapter 74- Sanity is Overrated

If you plan to ever GM a fantasy setting I can not recommend this story enough, particularly if you want to deal with undead. I myself am ripping out large conceptual swaths from here for my campaign with no shame. Be sure to read the author's notes too where he goes into design philosophy and such.

I can fairly  say, that this story is unique in the way it is written, as both a story, and a game script at once.

The tale of the Necromancer Elruin is a harsh one, in a world where necromancers are generally shunned. She only wants to be herself, with her undead 'pets' but the world disagrees with her.

This has solid worldbuilding, and basically the entire story is planned, including all the alternative paths the story could take, this story is meant to be one of the paths that could be taken.

Steady and good writing, with no major grammar mistakes at all, only some minor ones that could be ignored very easly.

This can be considered a good read for just about anyone who likes good stories.
Or stories with necromancers but then again, this does not develop like a usual necromancer story.

While the main character may seem a little OP, it's really well written and will make an excellent book - read the first 58 chapters in one sitting.. my only complaint was the "April fools" chapter that annoyed me to no end until I realised it was a joke haha

So I started this story cause I found it in the latest updates and man am I glad I gave it a shot.

The characters are nice especially the adorable abomination that is the main character and her horse.