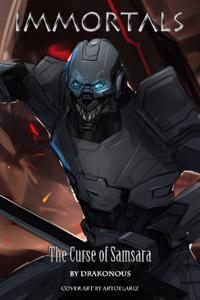 Immortals: The Curse of Samsara

For as long as Jason can remember, he has been a killer. Raised as a child soldier, he was trained in the arts of murder as a mercenary, an assassin, and a bodyguard. In short, his life was anything but dull. Yet his greatest wish was to live a normal life. Go to school, date a normal girl, have a moment to breathe and relax. His wish was to be a normal boy, no, a real boy and not some weapon. But his thirst for strength led him to the path of both the scientifically psychic world and the mystically supernatural world.

One day, he is entrusted to protect a young girl whose entire family was murdered. Taking her as his sister, Jason tries to lead a life that's as normal as possible in the most technologically advanced city in the world, Sanctuary. However his newfound freedom is threatened when his past comes to haunt him, and his hunger to join the extraordinary life once more begins to consume him. As enemies from both the worlds of supernatural and science come crashing down upon him, Jason must make a choice, and choose which life he'd rather have. An uneventful, normal life. Or the life of the impossible, where dog eats dog, and only the strongest survive.

All rights to cover belong to ArtofLariz. (Link to art: Here & Here)

Authors Note: This novel is tagged as a harem, so expect multiple love interests and several fangirls ogling the MC.

This book is Copyright © 2019 by Drakonous, all rights reserved.

As far as I've read ( CH 5) and peaked (CH 13), this is
, at least at the start, basically city hunter + the irregular.  Its written like the transcript to anime, and for what it is, it is written very well and I think many people will like it.  I personally am not interested in watching a dude 'seduce' every single woman  he comes across whether there 14 or 30. It just came off as cheesey  to me, but some people might like it.  Defenatly some action, but focus is on how girls react to Mc and flash backs,  I think the premise and even direction of the story is good, it just the focus on the female conquests of the mc destroys it in my opinion.  Again, many people may like this. Better then many anime, but its not for me.

Disappointing since world building, writing, etc are amazing with a lot of work put inro them.

A darker kind of mahouka

It's basically the same setup, a brother who is the god of war and death, and a sister who is a hopeless brothercon and also secretly pretty stronk. He then becomes a teacher (as opposed to student) at her school, and is so dashingly handsome (no joke, this is how it's written) that all the little schoolgirl hearts fall the moment they see him. In fact it's so bad that when they first see him, they literally flock to him like a group of dogs would flock to someone holding their brand of candy.

All the girls want him, even his sister secretly wants him, all her friends want him, all the female teachers want him, all the other women want him, in fact, all the women in the story basically want him. It's like he's been cursed with such beauty that everyone instantly loves him, now instead of getting sick of it like C.C. he has a history of fucking like a rabbit.

So yeah, this story is a bit heavy on the harem side, perhaps a bit too heavy.

Not to mention that every third chapter or so is a side story/flashback about how he fucked some other girl. And then there was an awful lot of murder in-between the fuckenings, but our protagonist is as good at killing as he is at breathing, he is legitimately the #2 ranked assassin/mercenary/killingmachine of the world, with #1 being the actual grim reaper, so as far as humans go, he's really #1. Killing sprees don't take him that long.

So this story is just a boatload of sci-fi killing sprees with some fucking in-between.

Honestly, I think the story of his rise would have been a more interesting read, instead of all these side stories and flashbacks that break the pacing of this story, what I think the author should really have done is write a prequel. I mean if he's really making this many side stories, it's eventually gonna end up amounting to a whole book's worth of text anyways (it's probably already close in fact, like 200+ pages maybe)

Now the low style score is because the story is written more like a script than a novel (author even admitted that this is what he's doing). As for the character score, I mean yeah, read the entirety of the above text and you will know why I gave it a bad character score, every girl is the same character and most of the men are two bit villains or nobodies.

As for the story, well it's not as bad as I've made it sound, the worldbuilding is at least mildly interesting for one, and although  the author is taking his sweet ass time about it, there are some interesting main and sub plots going on too.

But for whatever reason, when I reached chapter 28 (or rather the yet another side story after chapter '20') I just kinda stopped reading and I have not picked it up since.

If you were to ask me why, I can't really give you a reason, not one that I'm sure about, but it's probably that this seems like kind of an important side story that I'd want to read, at the same time as I want it to just go away so I can get on with the main plot and those conflicting emotions resulted in some kind of reading paralysis where I just quit...

Cool creation but a cringe classic

I enjoy the author's sense of humor, but the novel needs a rather decent amount of editing and the novel is rather cringeworthy in some aspects... The world is exciting and I wish I could get through more, but I personally can not handle the cringe.

A bit heavy and depressing, but done well.

It is a very good story so far, but it becomes quite a heavy and depressing read as you get into it, so it is definitely not something to be read if you are looking for something light.

There are a few cringy scenes, but it was otherwise manageable.

An awesome start to a very promising series

Starting reading this on a whim and was instantly hooked and binge read all the chapters currently available. Thank you for all your hard work and I am very much looking forward to seeing what comes next.

I've said it before, and I'll say it again: this novel is a piece of art. Any blind man can point out how much effort and hard work author has put into this novel, which, in my opinion, is a great success.

I LOVE THE WRITING STYLE. LOVE, HEAD OVER HEELS LOVE WITH THE WAY THIS STORY IS WRITTEN.

One of the reasons I like reading depressing stories is because of the way it's written, and this one doesn't disappoint... at all.

Hmm, what else is amazing about this book? Did I mention Alina and Michelle yet? They're such fine examples of woman power. Kudos to you, author, for crafting such strong women.

This story has more villains than I can count on my fingers, and all of them are original in their place. There is no repetition whatsoever in this book. I repeat: Everything is fresh.

Overall, a good read, please take out time to read this book and support, if you can :)