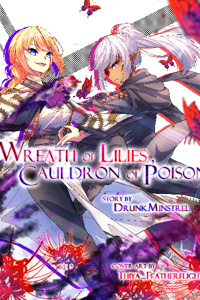 Wreath of Lilies, Cauldron of Poison

Wang Tian Gu, the Tyrant who had massacred countless warrior in Jiang Hu for 600 years had died

Taking with him the Soul Reversing Sutra, one the Eight Treasures of Jiang Hu.

Through a whim of fate, he transmigrated into the body of a misfortunate girl in a world far different from his own.

This new world is ruled by the law of levels, status, and skills. Where heroes and demon lords are born to fight each other. Where beautiful women and handsome men fought for dominance. Where swords and magic clash in a firework of blood and steel.

However, other transmigrators had also planted their roots in this world, bringing with them the blessings and cheats of the gods and goddesses who favors them.

For him, this is "Reality".

And now watch as the Heavenly Poison King raise havoc upon this world!

All for the sake of his Dao.

And everything...for the sake of revenge.

Great novel but one flaw IMO.

I like this novel, it has a lot of good points others have already listed so I won't say them. But there is one thing that is bothering me, at the moment I'm at chapter 28 and till now almost all men are sexually frustrated or something. In the beginning I didn't really notice because they were just the typical lustful men type of character, but now almost all of them are lustful and it is just getting annoying. Don't they have any dignity or something?

Sorry for the rant.

Besides that point and your grammar you're doing great!

just a lot of fun

Reviewed at: Chapter 93: The Understanding of Perfection

It's a lot of fun, enjoy the story of Lot the MC's a little overpowered I guess but one of the stories and about her becoming stronger it's more about her being the mentor to others as they increase their own strength And her interactions with her disciples in relation to her past self. I do very much like that she is just explicitly not a good person in the story and she herself did not pretend that she is as evil as she thinks he is either which is nice she may not care for people outside her circle of friends and loved ones but when it's in regards to her friends and loved ones she's fiercely protective which made for some great character dynamics.

the characters decide her main group of friends and the only female hero are not the most well-developed site characters but not particularly bad either in the antagonists with the mast outperform ability is just phenomenal Written comes off as absolutely someone who could and would exist within this world  while being suitably awful to make you enjoy watching him get his face beat in by the MC's almost as a good story and I would recommend you read it.

Reviewed at: Chapter 125: Become My Sheath

Feels like a classic MMO anime, with some creative touches mixing up Louis Cha writing style into Japanese anime story type. Grammar could be improved in the earlier chapters. The pacing is uneven for the earlier chapters, but gets better overtime. Overall it's a good novel that just need some additional editing.

i cant give a full 5* as this is still really fresh.  And im hoping this story will continue/  i dont want updates daily as that is very taxing all i want is it to continue for as long as your muse runs strong.

as for the aspects of the story im not expert for them and all i can do is recomend this to anyone who is skeptic. im sorry for my poor grammar but i wish to read more

You won't regret reading this novel.

I'm a person that is obsessed with ideas. The idea of something can make or break something for me. That being said I've read many books revolving around cultivation and many lit-rpg books aswell, so reading this wonderful blend of the genre is leaving me refreshed and raring for more. I hope the author reads my review and will continue writing this for I am very interested in where it will go, even if the protagonist is very over powered the idea is what I'm in love with and the execution is helping all the more.

I really like your story, but the grammar is just not up to par. You consistently switch between present and past, which really hurts the flow. There are the occasional wrong forms of words too, but those don't really disrupt the flow too much in my opinion.

The story is still readable since everything else is fine up to now. If one can get past the prologue, which is the chapter with the most errors so far, the rest of the story is much more readable in comparison.

To the author: Most b1-b2 English level can correct most of your mistakes, so you should seriously consider getting one to proofread. I can easily see this story getting a high ranking then.

Reviewed at: Chapter 20 : Perfection Made Flesh

Wang Tian Gu is one of the strongest people alive.

Until they aren't alive anymore. Waking up in the body of a young girl, Wang Tian Gu must make their way through a world that doesn't have cultivators.

It's a story worth a read, though it has some fatal flaws that prevent it from being a great story.

I enjoy the author's style and think they have a good way of describing battles/combat.

By far the biggest weakness. The story has sudden switches between past and present tense, missed contractions, comma splices, etc. The good news is that a lot of the grammar mistakes would be easy to fix. Putting it through a spell/grammar checker would probably find and help fix 50% of the issues.

The story is interesting. My biggest issue with it is that there's a distinct lack of challenges, at least through the first 20 chapters. Wang Tian Gu was at the peak of their cultivation, but the body they entered is that of a level 5 fighter. Despite this, they have little trouble dealing with enemies that should be much stronger according to the 'system'. This makes me wonder if there will be any enemies in the system who can compete. If not, only a cultivator would be able to pose a challenge, except... Wang Tian Gu is already much further along than they are!

I'm not traditionally a fan of evil MCs, but Wang Tian Gu has a bit of softness to her that I appreciate

Reviewed at: Chapter 37: The Hero's Bargain with the Devil

It's a good story, the premise is decent, execeutuon is good, grammar is good, it's just not my cup of tea. The mc is a very odd person, and her being a man in a woman's body is pretty odd, because the mc thinks entirely like he did in his past life. I really dislike illumncas character, she acts super weird, and has this weird ego. Also I dislike her whole "I'm better than you" thing. The author writes men in the book very weirdly, all of them seem really horny, and there's like 2-3 that are actually decent people, so that adds an odd feeling to the story. (Spoilers ahead) martell being used as a sex slave while still being a child leaves a bad taste in my mouth, along with slavery existing in general. All in all, read this if you don't care about weird things like people eating scorpions and bugs and stuff, and if you don't mind a villainous mc.

A concept I haven't seen before

I've seen plenty of cultivation novels before, but never one quite like this, in both the reincarnation and the cultivation method. Add onto that the story being pretty good and you have a winner.

I was looking around for stories similar to this one and it looks like my search paid off. I like the dynamic the MC has with the world and seeing what happens when two different "systems" clash.

The pacing has been good so far (reviewing this as of chapter 32) and i really hope it doesn't get bogged down along the way.