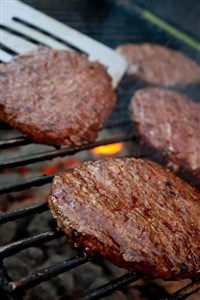 We the People Are Good to Eat

In a fatally overpopulated future Earth, all that the people have to eat is each other, and they thank God for every meal.

In this world, keeping the population trimmed and the meat quota filled is every citizen’s responsibility. Gladiator type combat games are now a high school team sport.  This is the students’ way of participating in both the population trimming and meat harvest.

A Cheerleader/Warrior Girl discovers that certain things in this world are not the way that everybody believes.  This leads to other discoveries, which might eventually turn their world upside down.

There is a post-apocalyptical society trapped inside an archology and they eat their dead to survive. Nobody was schooled in thermodynamics, so the fact that only the dead for food would not be enough to sustain a population is not questioned by the characters. People kill each other in high school to keep population controlled and to "harvest" more "food".

A twisted post-apocalyptical version of religions are presented, reader beware. I don't felt like it was criticism of real religions, just an element of worldbuilding.

All is well in their harvest gladiatorial weekly games (they hang a cheerleader of the losing team in the endgame ceremony, should point that) and it has been so for a thousand years.

Then someone refuses to remain "dead", and the card castle crumbles.

Characters: Clueless warrior society cannibal teenagers, naive to an extreme and ready to kill and die with their sexy death groan rehearsed. And since they are going to die anyway, they get birth control implants and you can figure out the rest.