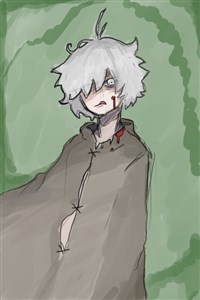 Chapter 1: From Now on, I’ll Live a Valiant Life

Underneath the heat of the afternoon sun, Ellis Murrin furrowed his brow.

“You alright, kid?” He asked as a bead of sweat dripped down his forehead. His pale hands shivered. They were still firmly clamped onto the child’s thin shoulders.

He paused for a moment before realization struck. Ellis hurriedly let go. Taking a step back, he looked down at the child in front of him.

The child in question was a fair skinned little boy with a baseball cap over his head. He looked to be around five years old, but the dimples on his cheeks made him appear even younger. A single red balloon was tied to his wrist.

The kid did not respond. Instead, he appeared dazed and slightly confused. The boy stared off into the distance, his somewhat hazy gaze firmly fixed onto the now distant truck barreling down the road.

Following his gaze, Ellis lifted his head and stared up at the truck. He unconsciously shook his head.

The two were standing in a relatively busy intersection within the middle of the city. Usually, traffic here wasn’t very heavy, but that didn’t mean that absolutely no accidents ever occurred. Take what had just happened a few seconds prior. Although it wasn’t an accident, it had come scarily close to one.

Ellis’s face was a noticeable shade paler than usual. A little bit of fear and a little bit of resentment swirled within his heart. A few seconds passed and the truck suddenly turned a corner before completely disappearing from his field of view. Even though the main perpetrator had left, the emotions still remained. He couldn’t stop the cold shivers from running down the back of his spine.

After a while, he turned back to the boy. “Don’t go running around so recklessly like that, okay? It’s dangerous. Before you cross the street, always remember to look both ways first.” Ellis chided the reckless brat with regurgitated warnings.

The boy nodded his head obediently. Despite how submissive he looked now, Ellis did not know how genuine his thoughts really were. He could only hope that this incident sparks some sort of revelation within this absentminded brat’s head. Just as he was about to say something else, he saw someone running towards them. She looked to be the child’s mother.

With that, he shooed the boy away and breathed out an ambiguous sigh.

“That was way too close for comfort…”

To sum things up, Ellis had just saved someone’s life.

The truck from earlier ran a red light and almost crashed into a child. Luckily, Ellis managed to push the kid away just before it could happen.

Honestly, he had prepared himself for death. It usually goes like that, right? Saving a person’s life in exchange for yours. That’s how it always plays out within all the books and stories that he often read during his free time. Fortunately, or unfortunately (depending on how you look at it), he did not die.

Through some miracle, he made it back to the sidewalk just before the truck could hit him. He had felt the rush of wind buffeting his face, but the impact and subsequent pain did not follow. Ellis narrowly avoided the Grim Reaper’s scythe. Still, he was not overly excited or even happy for that matter.

In truth, Ellis did not save the boy purely to save a life. There was an underlying motive to all of his actions.

He wanted to die. He had been searching for death back when he saved that boy’s life. Even now, it wasn’t wrong to call him suicidal. Back then, he simply thought that doing a heroic deed at the end of his life would look a bit more favorable to whoever managed the afterlife. Although they might be a bit put off by his reasoning, that was fine too.

Unfortunately, he did not even have that luxury.

Since he survived, he now had to continue living this shitty life of his.

Ellis Murrin was a man with no prospects. In fact, it wouldn’t be wrong to call him a negative potential type of guy.

He was recently laid off. In fact, it happened less than ten minutes ago.

He had been unceremoniously fired from his job. It was for a company that he never really quite memorized the name of, but that wasn’t important. What was important was the fact that he was now jobless. For anyone, being jobless certainly wasn’t anything good, but for him, it was a fate comparable to hell.

On top of being jobless, Ellis also had a monstrous debt hanging over his shoulders.

He was an orphan and the orphanage that raised him suddenly incurred a large debt after one of their past caretakers stole a large majority of their funds. What’s more, the same caretaker also borrowed money under the orphanage’s name. The end result was a debt that wasn’t too large by most standards but was absolutely astronomical for him and the people that raised him.

While that shitty caretaker may be gone now, the debt still remained, leaving the orphanage in a precarious situation. In the end, Ellis sacrificed himself. He voluntarily took on the debt for himself.

Thinking about it now, the synergy between a debt and being jobless was indeed quite frightening.

He let out a sigh. If only he had died, then the life insurance money under his name would have gone to the orphanage. It wasn’t enough to completely pay off the debt, but it would surely be more than anything he could ever earn within the next twenty years or so. What’s more, there was a possibility of the debt completely disappearing upon his death, but considering the guys that they owed money to, that wasn’t very likely.

Ellis watched as the five-year-old boy met up with his mother. The two hugged for a while before they disappeared into the crowd. That boy, there were plenty of kids like him in the orphanage. No, they weren’t quite the same. The children there, they grew up not knowing the warmth of a mother or the care of a father.

They lived a pitiful existence, and without him, their lives would only worsen.

Ellis shook his head. No, I can’t think like that anymore! He clenched his fists. Since I somehow managed to escape death, that means God hasn’t completely given up on me just yet. From now on, I’ll live a good life. I’ll take care of those kids, I’ll do something about the debt, and I’ll even find a girlfriend for myself!

He firmed his resolution. Indeed, for a man of his age, it was about time he got himself a girlfriend.

“The world is at my fingertips! Anything is possible! This is the first step to the rest of my life!”

Just then, something happened that would make Ellis regret ever saying those words.

A rotund bicyclist narrowly collided into him. Ellis stumbled back in surprise, while the man riding the bicycle screamed obscenities at him.

He was just about to shout back, when suddenly, “Ah—”

Ellis tripped on the sidewalk.

From the very start, the sidewalk was uneven. It had something to do with poor mismanagement of the municipal city funds, but it was too late to think about that now.

He helplessly fell to the street. The sound of a blaring honk filled his ears. Ellis turned his head, just in time to see the blinding headlights of an oncoming SUV.

In that moment, time froze.

One thought echoed through his mind.

What the hell was the point of my resolution!

The twin lights grew increasingly brighter until they filled the entirety of his vision. There was a moment of peace, before finally,

Bio: Primarily a writer, secondarily an artist. I can't promise that I'm any good at either one though.