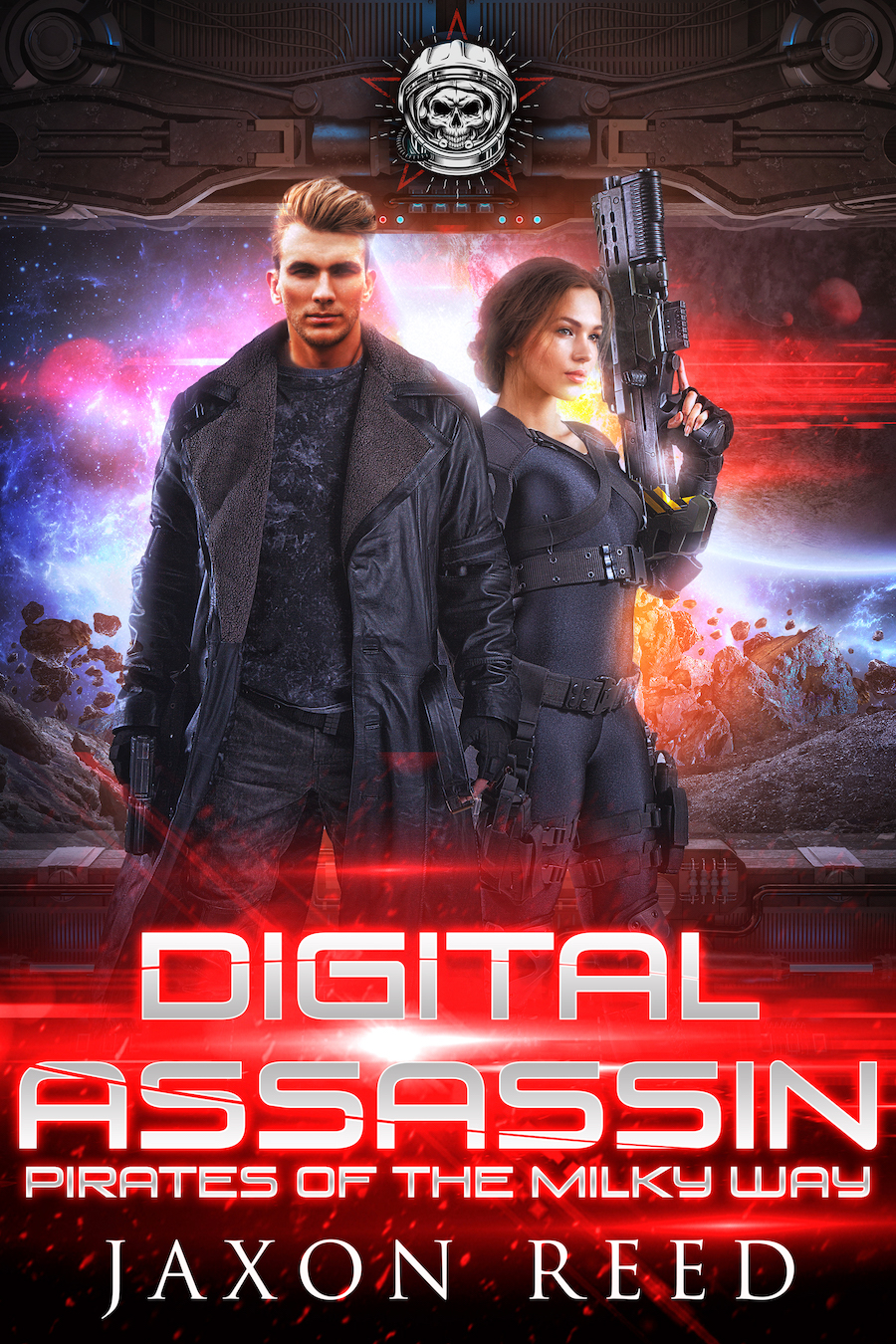 Light spiderwebbed across the holoscreen, making Rodrigo Diego-Rodriguez jump in the pilot’s seat. When it dissipated a ship remained, filling up the area in front of his command console.

The ship looked powerful and dark, with sleek gleaming metal glinting in the starlight. And it looked big, he thought. Much bigger than a typical spaceship.

He quickly relaxed and stretched happily, flexing muscular arms and clasping hands behind his head. His grin flashed bright white teeth. They matched his white t-shirt he wore above gray pants and brown combat boots. His dark hair was cut short, military style.

He touched the implant below his ear and mentally slid through the contact list. His eyes stopped on “Raleigh, Christopher.” Focusing, he made the connection.

The reply came back instantly.

Roddy smiled at the three-dimensional image displayed before him. The screen stretched three meters long, making it appear the front part of the bridge was transparent and open to space. The holoscreen looked as realistic as possible, but Roddy knew if he walked into it he’d bump into the wall instead of drifting off into space.

The Wu Drive, Roddy would be happy to tell anyone who listened, was developed by Elixabeth Wu, a researcher working for LSU back on Earth many years ago. Faster than light travel remained impossible, per se. But teleportation proved easier to accomplish. Researchers were able to port small items short distances in the lab, starting at the molecular level. They worked their way up until finally they could move large objects long distances.

Wu had the brilliant idea of attaching a teleportation device to a space ship. It worked as an engine of sorts, porting the ship from point to point instantly. The engines could port ships out of the solar system in a matter of seconds. Computers were developed to plot courses so that ships would not pop into the middle of a star or other undesirable locations.

All of a sudden, deep space travel became attainable, and humans spread out to explore the Milky Way.

Roddy would be happy to share this, but it was common knowledge. He smiled, though, wondering what Elixabeth would think about the results of her invention. No doubt she’d be happy to know that people finally realized her name was spelled correctly, just the way her parents intended, with an ‘x’ instead of a ‘z’ in the middle . . .

The door to the bridge opened and Christopher Raleigh walked in. Taller than Roddy by a couple inches at 6 foot three, or 190 centimeters, he too looked young and fit. He had dirty blond hair and bright blue eyes allegedly able to steal the heart of any woman from Lute to Telluride Prime.

Not that he cared. The captain was a famous bachelor, avoiding entangled relationships in favor of his ship.

Roddy grinned at him and said, “That’s right. ‘Oh.’ This, Captain, is a Mammoth Class, A-Level transport ship. We got ourselves a real honey pot.”

Raleigh nodded at the column of figures floating in the air next to the ship’s image.

He said, “What are the numbers, Lootie?”

LuteNet responded, her voice seeming to originate out of the thin air. She said, “Scans indicate 1,102 humans onboard, Captain. I sense an abundance of biocollars. I’m opening a line of communication with StarCen to determine if indeed all the biocollars represent indentured servants.”

Raleigh said, “A hold full of indents, huh? That would explain why they need such a big ship. Humanitarian standards dictate size and living space requirements based on passenger volume.”

“Yes it does,” Roddy rubbed his hands in delight. “What do you figure? About ten thousand per indent?”

Raleigh chuckled and said, “Probably double that. With the war going on, there’s not too many new servants coming online. These will likely fetch a premium. But don’t start counting your credits yet, Roddy. First, we’ve got to capture her.”

He made a mental command and shifted his neural com to the ship’s public address channel.

“Look alive, people! We’ve got an A-Level Mammoth Class transport in our net, with about 800 indents onboard plus a couple hundred other folks. This should be a very lucrative haul if we can reel her in. Kim and Pak, send out the drones!”

One of them had hailed back to him on the neural com, but he did not see which one. The two men often worked as a single unit.

Roddy and Raleigh watched as 200 attack drones sallied forth. They launched out of Ultima Mule’s transport bay, filling the bridge’s holoscreen as they screamed toward the giant ship.

Thanks for checking out Book One Chapter One.

The Amazon version complete with bonus chapters is available here.

If you want to read the entire free part of the book on one web page, head over to Patreon and look for the Table of Contents.