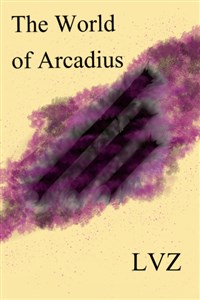 The World of Arcadius

The leaves glowed a purple satin color, dampened by the bright light filtering from above, and the floor beneath him was soft and giving, just like damp mud; dazzling, dark brown, it reflected purple. Every time the sun brightly illuminated, spots gave off a hint of dark red, slowly presenting him a secret. He could not decipher what the dancing light displayed: a bit of red liquid splattered on the dirt, the grass, the trees. He could not remember the trees being black and did leaves look soft like cloth, purple too? His eyes, when had they opened? He questioned, tasted his chapped lips, pain pinched his stomach, his vision flickered.

He was unable to move his limp body from the sitting position it was in, his back against a black tree. He could move his eyes and he strained his sight at the scene before him. A meadow lit aflame by the orange glow of a waning sun with pink here and there; it lay just beyond a grove of black bark trees that to him sparkled, outlined in orange brilliance. He observed the plants and leaves surrounding these trees are a normal green. Surrounding him was purple. Why was green normal again?  But there was a lack of time for more thought as his eyes began to droop.

Once again, he was surrounded by the lone embrace of darkness. It provided no warmth, but it accompanied in a place where he had no one but himself. And the darkness. Time seemed to pass but it also seemed to stand still, a numb feeling making him unable to think, cramming his head's finite space with nothing but emptiness. Hours, years, decades, centuries, a second, he could no longer tell how much time did pass.

Conscious without thought, his body slowly moves, taken across a sea of sludge, his mountainous foot anchored to a moving island that clashed and clanged with an eruption of noise. Its mountain erupted, molten sludge penetrating his sole. Time begins again as he counted the waves that splashed against his body and the growls and barks that the mountain sludge emitted as its heat smothered his foot. Feeling the pull on his body, his heavy eyelids began to open but this time with conscious effort.

The sky was black like the darkness that envelops but not complete as it had shining little lights in its midst. Surrounded by dark purple leaves shining on black skeletal branches the sky seemed just out of reach behind those tall unseemly limbs. A tug took his attention and he strained his neck upward and forward to look at the small creature slobbering over his foot. Its eyes open wide momentarily as it realizes the supposed meal is moving. Its piercing teeth let go, a purple mass darting back into the bushes, four legs stumbling underneath. Glowing orange, eyes stare out from within. And next to the bush but off in the distance toward the meadow, pink glowing lights began to sway. They burst, a faint popping sound as the lights left the meadow and went adrift into the sky. They sway here and there until they coalesced into a stream that softly landed on the black limbs of the trees as a slight rustling distanced itself. The glowing eyes have disappeared.

He let his head rest against the ground and shut his eyelids tight. Lights were nestled above him, pink bright lights the size of a finger. He refused to accept their existence. What he thought were pink flowers in the distance were, he peeked an eye open, hairy little balls.  He quickly shut his eye and tried not to think about the glowing purple grass he lay on. The cool wind racing across the land urged him to shiver but he made sure to remain stock still. A collection of soft suckling noise starts above, a gentle despair that reverberates through his very being. He could feel a tear, escaping his right eye, sliding into his ear.

The warmth upon his face pried his curious eyes open to the blinding light on his face. He glanced away but felt a small pressure in response. Crossing his eyes, he looked at the dimming light, at the figure poised on his nose. A small ball of pink fluff with thin translucent legs and arms and a regal face jutting out. The small face, with its pointy chin, porcelain skin, and prodding eyes, raised its head toward the sky. He stared at that dignified face until a silence settles between them. There is no more suckling, no noise but the wind.

"You explode. You kill our homes. You bring sorrow. You are darkness. You desecrate the light," the face solemnly spoke then looked down on him with scorn. "The light shall be taken from you."

Before he could ponder how the little person could speak so loudly, a pair of tiny beautiful hands dug into the bridge of his nose, the fluff now brighter than ever. Knees bent, translucent thin legs gripping his nose, the face opened its mouth, warm liquid sprayed across his brow. Red engulfed his vision as he felt his forehead turn into grains of sand, a guttural scream leaving his lips.

He sprang up and ran into a tree just as needles pulsed through the end of his skull. His face flattened, he struggled to get back up. He could hear a buzzing, no longer a mellow gentle suckling, but a swarm of sound. Extending a throbbing hand, he grasped a furry little thing, let go, and grasped again to find a sturdy tree. Pulling himself up, grabbing the end of a branch to stand firm, his eyesight dissolved before him, fire burning where his eyes once were. He could feel them bumping into him, all over him, soft little things that delivered mist and pain.

He plunged his leg forward and pushed his way out of the swarm. His thoughts jumbled as he tried to pull the cotton being away from his nose, unable to grip with enough strength as piercing pain kept rushing his head. He was running, or shuffling, the light dangling on his nose as it continued to poke and prod his face, releasing a fine mist onto his forehead as it did so. Every second was a shock of pain followed by liquid fire coursing through his veins. The throbbing filled his ears, the heat burned his heart, he felt his foot slam empty air. And he was falling.

His head slapped a rock, pressure strong enough to quench the light, and his body slid into a pool. He felt his body descend beneath the shallow water, slowly beginning to submerge. His sight was gone, the pain was gone, and then he was gone as well.

Bio: An amateur writer looking to share the worlds in his mind and improve in the process.