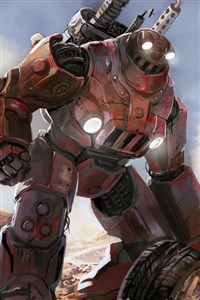 Supervillainy and Other Poor Career Choices

When a down on his luck machine shop owner ends up coming into possession of a rundown suit of power-armor, he sees an opportunity to make some quick cash.

Unfortunately for him, the world of Capes is not one that you may enter and leave at will.

What should have been a quick sale to pay off his debts quickly grows into an ongoing series of events that serve only to drag him deeper and deeper into the criminal underbelly of the city he calls home...

Supervillainy and other poor career choices is exactly what the title says: the story of someone starting a low-level supervillain career, almost entirely by accident. It's fun, it's entertaining, it's charming, and has become a new favorite of mine.

The story's main character, Erich the Mechromancer, is a mechanic finding himself bullied into joining a supervillain gang after making a power armor as an alternative to shakedown money; he is snappy, entertaining, and in contrast with the usual superhero protagonist, a total shut-in completely out of his depth. In spite of the harem tag and explicit sexual content, romantic interactions are low-key and mostly treated humorously.

The writer's style is much the drawing point. The characters have a dry humor, witty narration that make the read delightful and entertaining; doubly so since the writer is fond at turning cliches on their head (such as the local supervillain having no interest in picking on superheroes when suggested, as they are out of his weight league). I had quite a few laughs at the jokes and surprises.

My one nitpick about the story is that the character isn't very proactive, and basically has no goal but surviving day to day (although he obviously grows more comfortable with criminal acts as the story goes on). While this fits his personality as an introvert guy trying to get by, he seems pushed by the plot rather than the other way around. While the author has hinted at further development on that front,  the rest of the cast often stands out more than the hero by contrast and drive the story forward.

In conclusion, I eagerly recommand that you give this story a go, as I'm sure it will keep you amused and waiting for more.

There is much advice on how to be an excellent writer. I personally think that the most important virtue a story can have is beeing entertaining.
Which Supervillainy and Other Poor Career Choices definitely is.

The strengths of the story so far include:
- Fast Paced, both dialogue and narrative time.
- Other charecters are quickly introduced, both friendly and antagonistically (and done so seamlessly with the story).
- The Main Charecter is a real person and not an Isekai stereotype.

An interesting take on the superhero genre

This story is, from what I've read so far in the first few chapters is a very interesting take on the superhero genre from a supervillains perspective. The author's style, grammar and story is among the top of stories on royalroad. The characters are not one-dimensional and the world-building is going at a natural pace. Altogether this is just a fantastic new story that I hope to see continued.

Love it so far

A very down to Earth, non-ambitious main character that gets dragged into a bit more action than he ever wanted. He gets wrapped up into another narative, between more high level playes, so he needs to step up his game, not for the benefit of any others but himself. This is not a save the world story, the world is already half way into hell but it seems to have gotten comfortable with that. This is a story of survival, and how hard times do not make  good people, but only hard pieple or dead people, and only the former have the strengh to bring about a tiny bit of the good times. Cheers for the author and please keep this going.

This is good stuff.

The plot moves along steadily and is rather unique, and while worldbuilding is kept to a couple of sentences now and then, it's enough to lend it some color. I say steadily because the pace is rather consistent, but I certainly wouldn't mind if it slowed down a bit -- ergo if the narrative and narrated times got closer to each other.

Characters are memorable and distinct, and the the protagonist's choices are reasonable and fitting (which is a pleasant change from many others). I must say that many of them feel a tad over the top, but these cartoonish and overdrawn personalities lend this story its own little charm.

The grammar and spelling are both more than decent. While I did spot the occasional typo or, in rarer cases, grammatical error, those were nowhere near frequent enough to become jarring, which is a major step up from 90% of the novels on here.

All in all a good read.

A great amount of fun!

As the title suggest, that's what happened to me. The chapters all have great grammar, read fluently and have a nice lenght. Things I consider vital to a great story. Which this certainly has the potential to become.

As for the story premise. I've seen a lot of attempts to make a "villain" mc work. But with this story I actually believe it will. The fact that the MC, Erich might not be as willing to be one makes it all the more entertaining.

He might get dragged into the villain lifestyle not by his own decision, but he's gonna make it work anyway.

As of Book 1 the story is great! Smart MC but still makes mistakes and pays for it. Believable characters that are deeper than most on RR. Good mystery brewing with solid advancement. 8/10 great story overall a solid story, clean grammar, nothing super special but a good read nevertheless.

It is really a good novel and the world building  reminds me a bit of worm with all the craziness that is going around .The  mc personality is unique like he is objective and not that judgmental also he doesn’t have good moral compass neither he is compaled to do bad things just for the sake of doing bad things. Also the side girls are equally crazy hot .

Amazing story and enjoyable characters. Great job of forcing a guy into the life without making the story feel forced. Only real downside is the very clear lack of proofreading before updates. Nothing unreadable just the last bit of rough draft needing polish.

One of the best out here.

First of all, some tags.

The story goes on an alternative history of earth after WW2, where people with super powers started to appear. The main character was an ordinary young man with no powers (as of now), trying to survive in a world dominated by superpowers.

The author was very good at character development and exposition. It is done so seamlessly and pleasant to eyes.

World building was very realistic, with almost no info dumps. I'm looking forward how it is going to develop.

Pacing is fast, but not too fast.

Localized to American society and values. Probably intentionaly done. I like it.