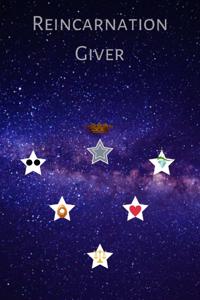 A unique reincarnation story where the main protagonist is the God. A story that diverts from the usual, God reincarnates human to something and the one reincarnated become the main character. A story about a God King, Nebulus and his unveiling of his mysterious past as well as the calamity that awaits the future. An age where the Gods chooses souls from worlds to reincarnate them to their governed world. For the Gods each reincarnated soul's achievements are counted as the God's achievements which in turn gives them power. As the Gods struggle towards supremacy. Only one God, the weakest known God King in the pantheon, Nebulus, refuses to join in the God's political struggle. Nebulus then promises to himself that he will never use a soul for his own advantage. One day he noticed a beautiful yet amusingly violent girl. She catches his attention in return receives his blessing which is to create a link between them and lets Nebulus use his skill unique to all of the God's but decides if to use it or not. After time has passed and a tragedy occurred, will Nebulus stay firm on his views? This story is about a God King who managed to get his hand on a skill that lets him interact with his world. Watch his adventures in his world while he interacts with different people, battle with those that go against him as it gets harder and harder to hide his powers and slowly unravel his past in the Great world of Alxia. Author's Note: Thank you all for your support be on the lookout of the special series: """"Continuous Reincarnation (Reincarnation Giver)"""" It is a series based on the current God Emperor and how he finds a link with someone named Estral in the common world and keeps reincarnating him into different worlds each volume with his memory intact. The story of CRRG can easily surpass 400+ chapters. It has a random release. A combination of different genres all in one. It includes both Sci-fi and Fantasy. For now enjoy the main series RG.

These are my thought's Enjoy.

Reincarnation Giver has become one of my favourite light novel to read on a daily basis i find my self looking forward to the next time the chapter might be released and think ' what is he going to do now' or 'how is he going fight that person'.

To be completely honest i put off reading for a long time because i thought it was going to be about a very violent girl reincarnated and i don't like reading story where the persons like 'you accidentally touch my breast so i'm just gonna shatter your balls and talk shit about being a pervert because you did that' i just have to say if i met a girl like that in real life i would not care i would just punch her so hard in the face she would come out looking like Shrek's sister i'm not a violent person but i just hate that so much i cringe when ever i see it. sorry i got to much into writing about that for a moment i forgot i was giving a review. to say what i'm thinking about is thank god it wasn't about that

it is an original novel well from what i have seen it is original; it has a very good way of doing thing and i really enjoy reading about how Nelus put some who is extremely cocky in their place.

I felt a little disappointed  when every one find out Nelus is a god and is like 'that's cool i guess' there was no *WOW* factor everyone just go's along with it like it is an everyday thing.

other than that i didn't really have any problem with it so thank you for finishing if anyone read this because you know this is like my life *Jokes i'm not that old*.

I have read the entire chapters in a day.I just cant stop reading.
usually i dont read side stories cause most of it are boring but in this ff for me no chapters were boring
Thanks for sharing your story.Keep up the good work!

I like the story but the females characters are just kind of like, “there”, to fulfill the harem tag which is an issue.  They instantly fall in love at first sight.  Romance seems forced and lacks proper courtship.  At the moment, there just isn’t enough information or depth for me to actually care about any of them as a character.

Grammar is okay and does not deter me from enjoying the story.

Love it, truly a work of art

Truly a great piece. With a overly thick headed main, to hardly see what is going around him but the way the act upon how he needs to just take the cake.

NO matter the trouble he will finish it, kind of feel, he won't let anybody he cares for suffer, and a true person to himself, and OP at it.

UPDATE: I wont have time for a full review for a while but the author has fixed my major issue with the emotions being where dialogue should be, increased my rating by a star. It reads quite a bit better than it did before.

(I have read until chapter 15, past that point I cannot guarantee this review will be accurate.)

Uses *emotion* to replace any dialogue or descriptions of how a character is feeling, it gets to the point where in the story it gets legitimately distracting and frustrating to read these descriptions that could easily be put into actual sentences.

Reila: *Blush* Sir I’m sorry for before… U-uhm c-can I get your name please.

I understand its hard to get across a mood for some writers but what the hell. These are very basic emotions you are trying to convey, could they not have been described even with a simple sentence, was there a need for you to take up dialogue space for this laziness in writing? It is one of my biggest personal pet peeves in writing when authors seemingly purposely attempt to take their readers out of the story for no reason.

Spacing is decent. Descriptions sometimes make zero sense. Basic grammar errors in more than a few places. MC reveals himself to be a deity and people are only mildly amazed while on Earth, if its on Earth and someone showed proof they were able to be described with the term “deity” I cant imagine someone not freaking out, very unbelievable.

Overall not too bad, but the lack of useful descriptions and utter laziness when it came to certain parts of dialogue drops it down a star. The other flaws in believably, grammar, and spelling drop it down another half star.

One of my new favorites

I really enjoy this one, it has most of the things I look for.  It is fun, funny, exciting, and seems to have a well fleshed out setting.  The characters have personalities that are not too outrageous, and room for growth.  I am very much looking forward to the future of this series.

I'm a simple man, I read a story with an OP mc and a harem. i give 5 stars

Well fuck I like it. Le me see how it will go on.

I love it its really unique atleast for me

This a really intresting FF i havent read one like it itll be fun to read and see where it goes. so far its  good i reccomend it. i also dont see any problems  with the story or writing style or any grammar mistakes that are noticeble.all in all i really enjoyed your story and hope you will continue it.

PS.only my second review so it might sound weird not sure anyways gud luck on your FF.

Reviewed at: Chapter 2 - Realm of the Celestial God King

I like the story, and I like the idea, but the English and the characters emotions and depth are basically non-existent