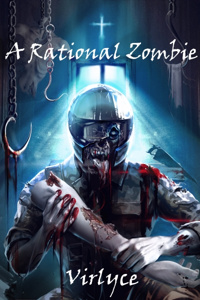 ...it's a comedy, not in modern sense comedy, but classical comedy, like Dante's Divine Comedy, which is as bleak if not bleaker, like an ancient Greek's comedy where you pits two group of people or society in an amusing conflict in very dramatic irony to provoke laughter.

Nah, the fiction is not really about seeking God, but it's a good overarching motive as any. That said, I'm actually impressed. The fiction is so solid it makes author's last works, Godking Legacy, seems so shaky it might fell under its own weight. Author's skill has improved by leaps and bound! I'm now giddy about his/her next project.

Now, time to criticize.
Disclaimer: This review is written when I reached ch.101. I need to express my criticism at that point, so here we go.

The rational zombie protagonist started its journey by suddenly gaining lucidity. Its memory was limited, but it didn't prevent it from make sense of situation or did it best to keep itself from losing its sanity. From then on, it's a series of curious prods, experiments, and application newly acquired knowledge. It sometimes took a leap of logic, I caught myself frowning when the zombie so quickly understand the importance of grace period between hunger emergence. Same leap of logic happen elsewhere, but overal it's fine. Its adventure were written skillfully, with humor sprinkled in every now and then. Full score for protagonist.

The word choice followed its level of knowledge. I believe it took considerable effort to find simplified term, but reader may sometimes find the author failed in that regard. A complex word, whether it's a noun or a verb, can suddenly enter its vocabulary. I think it's about 20% of the times its vocabulary acqusition took a leap, but it's quite jarring nonetheless. Grammar score 4/5.

The world in Zombie's Journey is bleak. Governments crumbled, utilities fallen into disrepair, even anarchy cannot sustain itself. People are forced to gather in small, tribal-like, community. There's no effort in trying to build back civilization and I think it's weird. Why don't they try to take over defensible building complex, like military base. Why don't people try to revive farmland or small-sized industry?

After anarchy died down, organizing people should be easier, so is resources acquisition. It makes sense people must depend on raids in first few months, but leadership should emerge and the strive for expanded security should start. It's really unthinkable the most advanced tribe only has cesspit for sanitary facility. The zombies are dumb, the village should easily expand. People should live in relative peace, at least until, spoiler ahead, they realize no baby is born to replenish the population. In this sense this fiction is wanting in the worldbuilding department. I suppose worldbuilding is a part of story score, so 3/5 over there.

Then the antagonist, the still living humankind. What a failure they are. They have no sense of military tactic! When they send foraging party, they don't appoint any scout. When they recognize the threat of intelligent zombie, they assume but never assess. The five fighter party who try to loot fallen Ranger Station is the very picture of incompetence.

The Garrison is another. Why it doesn't come into their mind that offense is an essential part of defense? The threat is only a single commanding zombie! They indeed send three scout, but once they understood that single zombie can fight back, why did they not prioritize securing more information? They should run away once they know their defensive position untenable. These scouts also understand that the zombie know English, why don't they at least whisper if not speak in other language?

The defeat of college kid group (the first group the smart zombie attacked) is understandable. They were caught unaware. But everyone following them are idiots. For this reason, the antagonist got zero score. Since protagonist and antagonist are part of character score, I suppose 3/5 to balance the wonderful protagonist.

All in all this fiction is very worth reader's time. I think it's very well written I start to hold it to a higher standard. Until the part where the protagonist attack the five cabin base, I even think this may be a rational fiction (I'm a ratfic sucker), too bad it failed two key aspects of it afterward. But it's a very good adventure story indeed.

It was a interesting read.. I think it's the autors best fiction, but it's def not for everyone . Unfortunately the ending is feels like really rushed.

I really like that book, it was my daily dose of pure logic, it was extremely refreshing to see our society from such a point of view, I reaalllyyy encouraging people to read it, if they aren't scared by different point of view that the mainstreams ones, if you aren't discussed by not realy humain MC and have seen a looottt of internet

It's a Virlyce story. The world building is great, there is humor, things never get too dark or tragically edgy. What more is there to say ? Read it and enjoy!!!

I enjoyed this story, although I did have a headache at the end so my opinion of the end of the story might be off. To be exact, the ending was cool, took you for a spin, but felt kind of lackluster compared to the rest of the story. I still recommend reading it though, that was probably just the headache.

Oh, and personally I wasnt too shocked at the gore. Probably a combination of headache, no emotional attachment to people being eaten, and of course my emotions dont really work like they do for others. Anyway, it's bad but not the worst I've seen.

Style wise, it's got It down. Gorey, but curiosity invoking, you can't help but want to see what the main character will do next. At times its impressive what they manage, but there is a fairly good excuse:

They are semi immortal, feel no pain, have plenty of experience, and no emotions to hold them back. Of course they are going to be good at killing.

Story, well, it works? It isnt very clear to be fully honest, but it is there. More of a slice of life than anything else.

I can't remember anything serious about grammer, although based on my fading headache, it might if been that the grammer of the entire story was just slightly different to what I am used to from other books, annoying my brain just enough by making me reconsider everything subconsciously. But that's my problem, not yours.

Character wise, well, everyone has a different character. You can kind of tell who is who, and there are hints at what kind of person someone is based on their actions. And the main character also has a personality and what not. But they are a zombie at the end of the day, so dont expect any growth in that area. Same with the other characters, it's too short a time frame for their to character growth.

Tl;dr read the book. It's good. No serious problems beside gore. So read it.

i like it, its something different,unique. Keep it up

The plot is driven by too much dumb luck

Good story, recommended. It's very interesting to see the author's take on how smart infected actually think and its point of view

I give 4 stars because the last arc is just plain dumb, the MC just got way too much dumb luck. But overall I think it's worth the read

I liked it but that ending.

The novel was enjoyable. But the ending imo was also very disappointing. The plot did not at all foreshadow the end, there was tons of questions left unanswered and overall I am left feeling like the Author just didnt want to continue so he ended it.

What caused the plague? Why was the mc the only smart zombie? Do the survivors farm or is it just scavenging for supplies? How long has apoc been going on? Why was mc one of the only zombies to regenerate? So many things left unanswered. I really enjoyed the plot but the ending was a shame.

Scrolled past this thinking, not much of a summary, skip. Then at the bottom Virlyce, instafollow.